John Tiegen did a lot less shooting than you might have expected during the deadly 2012 Benghazi terrorist attack.

Ballistic Magazine published an interview with Tiegen Tuesday, and there’s a small detail in there that I found to be extremely interesting. The Benghazi hero claimed he fired fewer than four magazines on that horrific night of September 11, 2012, that left four men dead, including Ambassador Chris Stevens. (RELATED: HERE’S A CASUAL REMINDER THAT ’13 HOURS’ IS AN OUTSTANDING MOVIE)

“Ah, not very many. I don’t spray and pray — I pick a target and shoot at it. I think I used fewer than four mags,” Tiegen responded when asked how many rounds he let off. 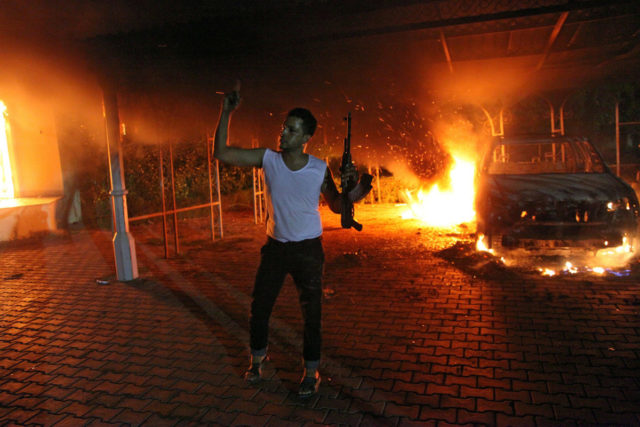 An armed man waves his rifle as buildings and cars are engulfed in flames after being set on fire inside the US consulate compound in Benghazi late on September 11, 2012. An armed mob protesting over a film they said offended Islam, attacked the US consulate in Benghazi and set fire to the building, killing one American, witnesses and officials said. (Photo credit should read STR/AFP/GettyImages)

I have two thoughts on his comment: First, I’m surprised he fired fewer than four magazines over the 13-hour firefight. Let’s assume that he fired every single round from a standard capacity M4/AR-15 magazine. Those things can hold 30 rounds. That puts him at 90 rounds for the evening. I’m surprised he fired under 100 rounds. As anybody knows, you can rip through a lot of ammo very quickly.

That leads me to the second part of his quote. “I don’t spray and pray — I pick a target and shoot at it,” speaks directly to his level of training. You never know how much ammo you’re going to need or if there will be any re-supply run. It takes extreme discipline to conserve ammo in the middle of a 13-hour firefight. I can’t even begin to imagine what that must have been like.

God bless all the men who fought for hours on that night to save as many lives as possible, and we must never forget the sacrifices made by Chris Stevens, Tyrone Woods, Sean Smith and Glen Doherty.