The founder of Sleeping Giants, a left-wing activist group that has targeted right-wing voices with boycott campaigns, has managed to keep his identity a secret, even as his own group has become a major political player among liberals. Until now.

Sleeping Giants was founded by Matt Rivitz, an award-winning ad copywriter based in San Francisco, a Daily Caller News Foundation investigation has found. 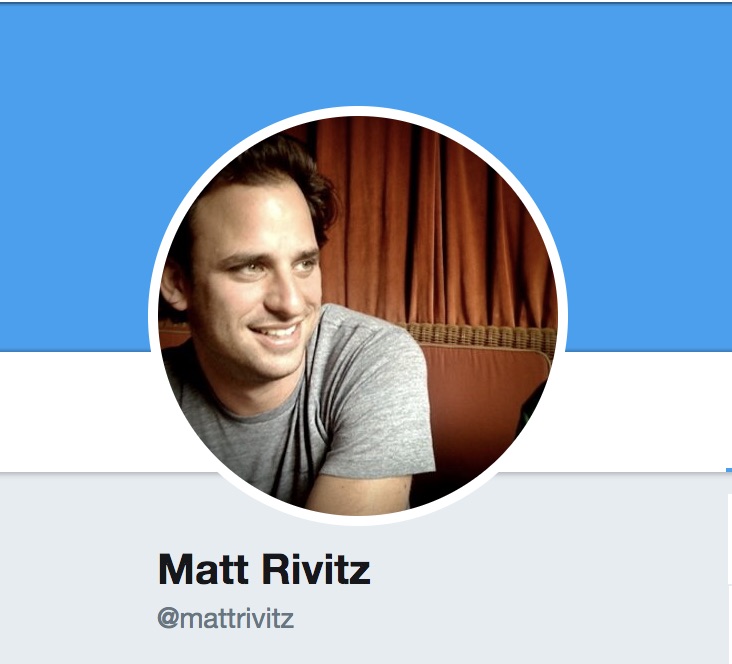 To accomplish that goal, Sleeping Giants has waged an intense campaign to pressure Breitbart’s advertisers into pulling their ads from the website. It’s worked pretty much as designed.

Breitbart lost 90 percent of its advertisers over the span of two months in 2017. Sleeping Giants has both maintained its pressure on Breitbart’s remaining advertisers and expanded its focus.

Sleeping Giants began pressuring investors in October 2017 in Renaissance Technologies — a successful hedge fund — to pull their investments because the company’s CEO, conservative billionaire Robert Mercer, had a financial stake in Breitbart. Less than two weeks later, Mercer sold his stake in Breitbart and stepped down from the hedge fund.

Sleeping Giants also boosted Parkland student David Hogg and Media Matters’ boycott of Fox News host Laura Ingraham in March over a tweet she sent about Hogg. Rivitz’ group posted the name, position and email address of a Hulu vice president and encouraged its tens of thousands of followers to email her and demand that the streaming website boycott Ingraham’s show.

But even as Sleeping Giants became a major political player — described by The Washington Post as “the mysterious group that’s picking Breitbart apart, one tweet at a time” — the person who launched the group managed to remain anonymous.

Rivitz, who did not return repeated requests for comment, took steps to protect his identity, including deleting his personal social media accounts, but he dropped hints about himself in interviews with reporters that led TheDCNF to identify him as the group’s founder.

Additionally, members of Rivitz’s social and professional circles weren’t as cautious on social media about protecting his identity — particularly in November 2016 when Sleeping Giants was still a little-known pet project — and indicated that he was the man behind the group.

A Sleeping Giants spokesman told AdWeek in March 2017 that the group’s founder was a man who worked “in marketing.”

That same month, the Sleeping Giants’ founder gave an interview to a San Francisco-based writer for Mother Jones — who agreed to protect his anonymity — in which he credited a Twitter exchange with IKEA as part of what inspired him to target Breitbart’s advertisers.

“Companies have boned up their customer service on Twitter,” he said. “I personally was at IKEA once—and this is kind of where the whole thing came from—I was waiting for, like, two hours for some shelves. Whereas on the phone you’ll have to wait, I just tweeted at them and literally within two minutes they wrote back, ‘Hey, how can we help you?'”

Rivitz has since deleted his account, but internet archives reviewed by TheDCNF show him engaging with the IKEA brand as described, complaining about waiting two hours to pick up a purchase.

“@IKEAUSA you literally are the worst,” @mattrivitz tweeted on Oct. 19, 2016, tagging the company’s official handle in the post. “Been here for two hours to pick up one thing. Still don’t have it. Terrible.”

IKEA’s official customer service account, @IKEAUSAHelp, responded to Rivitz’ tweet: “We’re sorry for your wait Matt! Please let us know if we can be of any help!”

Other facts uncovered in TheDCNF’s investigation also pointed to Rivitz.

“Here’s another way to put your post-election angst to work! If you want to help out, just go to @slpng_giants on Twitter,” she wrote on Nov. 22, 2016. She added “PS: Nice idea, Matt! (Matt Rivitz).” The parenthetical appears to have been a way to tag Rivitz’ since-deleted account in the post. 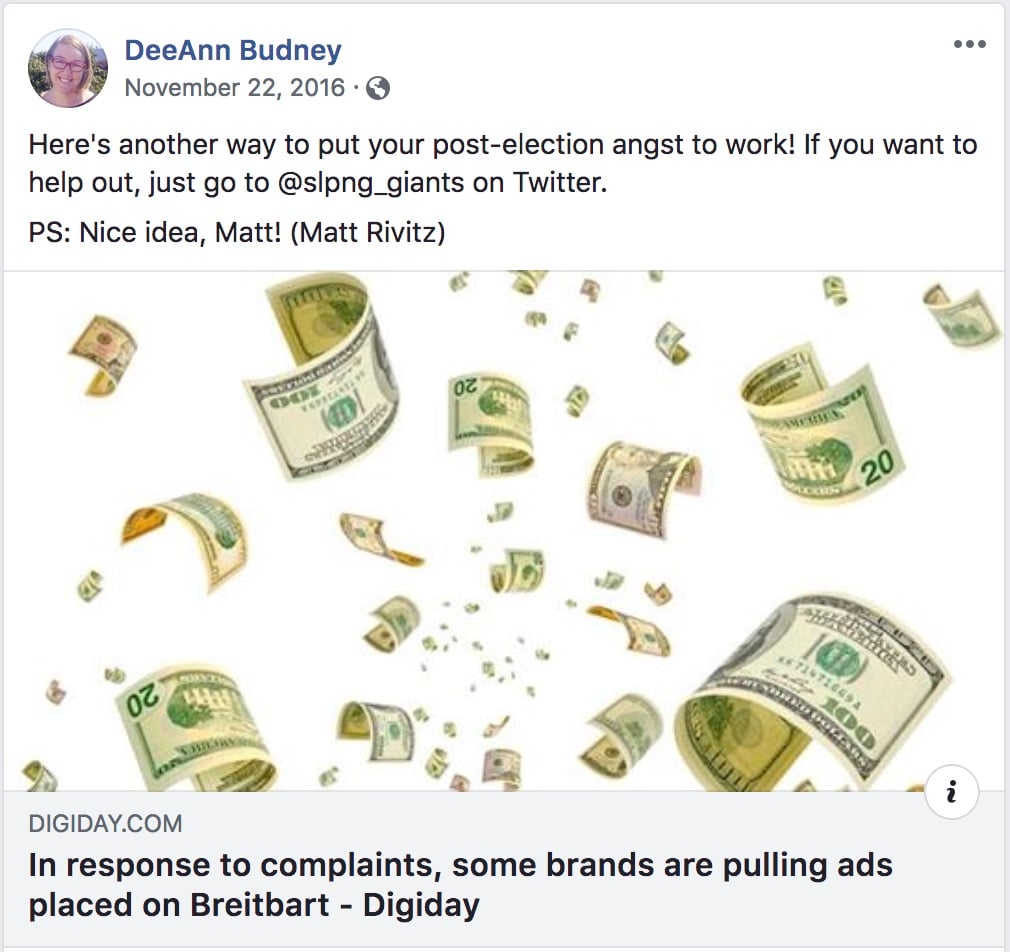 Minnesota woman Sara Krasny, a Facebook friend of Rivitz’ wife, was one of the first Twitter accounts to cheerlead for Sleeping Giants.

She described him as married to a “spa alum” three days after the group’s launch.

“Spa” is St. Paul Academy and Summit School, an elite private K-12 school in St. Paul, Minnesota. Krasny is an alum of the school and held a leadership role on the school’s alumni fund at the time, archives of the school’s website, spa.edu, show. 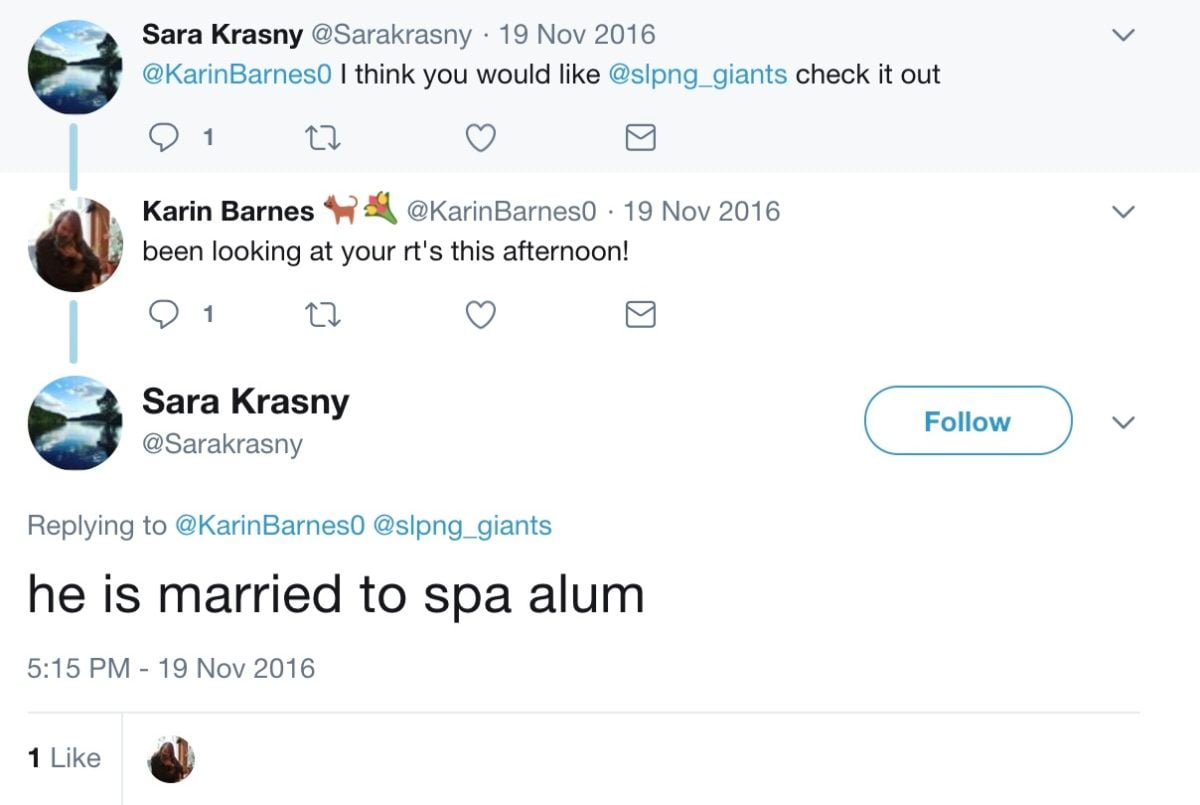 Before this article, the only known Sleeping Giants member was Britton Taylor, a San Francisco-based ad writer who fundraised for a billboard and has been more open about his work with the group.

Seth Nightengale contributed to this report

Editor’s Note: This article has been updated to include Rivitz’s confirmation. Also, since Rivitz later confirmed the story himself — something the Caller sought directly from him prior to publishing the story — editors have removed some references to his wife.