The important meeting between the two world leaders comes amid new indictments of Russian officials in special counsel Robert Mueller’s investigation and worsening ties between Washington and Moscow. The initial meeting was cordial but tense. 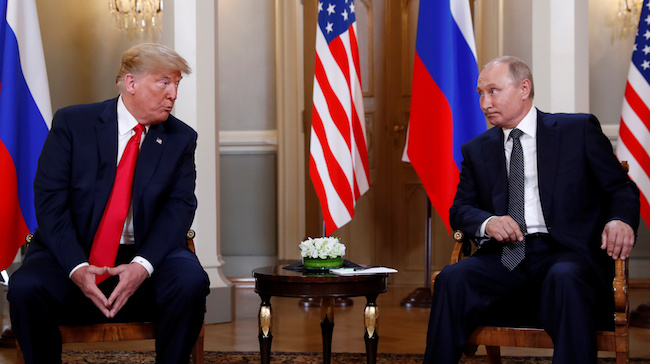 “I think we have great opportunities together as two countries that frankly, we have not been getting along very well for the last number of years,” he added. “I’ve been here not too long, but it’s getting close to two years, but I think we will end up having an extraordinary relationship.”

The president, as his critics were quick to note, did not mention election meddling in his list of topics for discussion, but this issue may be brought up at a later point in the summit, as Trump has said as much. He stressed during the press conference the need for improved relations with Russia. “Getting along with Russia is a good thing,” he explained.

His comments follow a historically inaccurate tweet that suggests that deteriorating U.S.-Russian relations are tied to the ongoing Russia investigation, what the president calls a “witch hunt.” The investigation has yet to produce any solid evidence that Russia influenced the outcome of the presidential election or that the president colluded with Russia to win the 2016 election.

Our relationship with Russia has NEVER been worse thanks to many years of U.S. foolishness and stupidity and now, the Rigged Witch Hunt!

Speaking at the brief press conference, Putin said that rising global tensions made talks between himself and Trump a necessity. “The time has come to talk thoroughly about our bilateral relations, as well as various hotspots in the world,” the Russian president explained with the assistance of a translator. “There are enough of them for us to start paying attention.”

Secretary of State Mike Pompeo will sit down with Russian Foreign Minister Sergey Lavrov while Trump and Putin meet in private and expanded sessions with advisers.

The president said in an interview over the weekend that he is going into the summit with “low expectations.” Trump said in a series of tweets that he will be criticized regardless of what he accomplishes. (RELATED: Trump On Putin Meeting: Nothing Will Be ‘Good Enough’ For Dems, Establishment Media)

“Heading to Helsinki, Finland — looking forward to meeting with President Putin tomorrow,” Trump tweeted Sunday. “Unfortunately, no matter how well I do at the Summit, if I was given the great city of Moscow as retribution for all of the sins and evils committed by Russia over the years, I would return to criticism that it wasn’t good enough – that I should have gotten Saint Petersburg in addition!”