Some of the most trafficked news websites and popular apps went down Tuesday in an apparent massive denial-of-service attack from a number of countries.

Twitter users across the platform claim servers went down due to one or several coordinated attacks on these sites by overloading the servers with traffic in what is called a denial-of-service (DDoS) attack.

Government websites, like the U.S. Department of the Treasury, also went down, but are now back up and running. Google is reporting it suffered a power outage that took down Spotify and Snapchat.

“We are looking into DDoS attacks impacting the [stability] of our services,” video game publisher Ubisoft’s user support account wrote in a tweet Tuesday afternoon.

“We’re currently monitoring DDoS attacks impacting Ubisoft services and causing players to be unable to connect to games. The attacks are focused on our games connections and server latency, which we are working on mitigating. Thank you for your patience as we resolve this,” the game publisher also tweeted.

The highly popular World of Warcraft also went down, game-maker Blizzard wrote in a tweet Tuesday.

The source of the attack could be coming from a number of countries, like China, India or the U.S. itself, according to DigitalAttackMap.com, which a Twitter user refers to in the screenshot below. 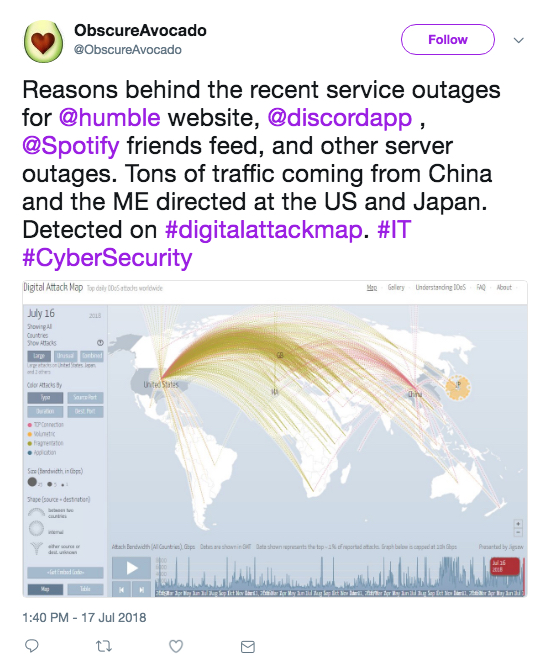 Pictured is a screenshot of a tweet from ObscureAvocado captured on July 17, 2018.

When Internet users attempted to visit these sites, they were greeted with a message saying, “The server encountered a temporary error and could not complete your request. Please try again in 30 seconds. That’s all we know.”

Here is what users saw when they attempted to visit Drudge Report, Breitbart, or AP news Tuesday for a period of time in the afternoon.

It’s not clear if every single one of these websites went down due to a DDoS attack, or if it’s a coincidence.

Amazon’s site briefly went down. Some on Twitter also speculated that it was due to a DDoS attack, but the site has been receiving much traffic for its huge summer sale called “Prime Day,” tech news site Network World reported. (RELATED: Amazon Workers Around The World Are Going On Strike During Huge Summer Sale)

The Daily Caller News Foundation reached out to several platforms for comment and will update this article if and when a response is provided.