CNN left out an important statement from President Trump while reporting on his son’s infamous Trump Tower meeting on Monday.

In a morning segment with White House correspondent Abby Phillip, CNN sought to demonstrate that the president changed his story on the meeting between Donald Trump Jr. and Russians promising dirt on then-candidate Hillary Clinton.

Trump tweeted on Sunday that Don Jr. had, in fact, taken the meeting with the hopes of getting opposition research, something many media outlets took as a shocking flip on the president’s previous statements about the meeting.

Fake News reporting, a complete fabrication, that I am concerned about the meeting my wonderful son, Donald, had in Trump Tower. This was a meeting to get information on an opponent, totally legal and done all the time in politics – and it went nowhere. I did not know about it!

CNN displayed a graphic purporting to show the timeline of the president’s conflicting statements about the meeting. 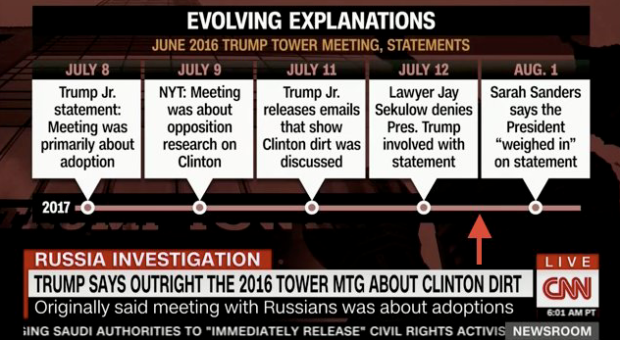 The graphic, however, excludes an incredibly important piece of information.

On July 13, 2017, Trump said in a news conference with French President Emmanuel Macron that “most people” would have taken the meeting in order to get opposition research.

“I do think this: I think from a practical standpoint most people would have taken that meeting,” Trump said at the time. “It’s called opposition research or even research into your opponent.”

“Politics is not the nicest business in the world, but it’s very standard where they have information and you take the information,” the president added.

This statement from the president seemed to confirm the NYT’s reporting July 9, 2017, that Trump Jr. was promised damaging information on Clinton before taking the meeting.

It also makes his new statement — that “this was a meeting to get information” — not quite the surprise revelation that CNN made it out to be.