President Donald Trump thanked Kanye West Friday for his “support” and being “willing to tell the truth” following the rapper’s Thursday appearance on “Jimmy Kimmel Live.”

“Thank you to Kanye West and the fact that he is willing to tell the TRUTH. One new and great FACT –African-American unemployment is the lowest ever recorded in the history of our Country,” the president tweeted. (RELATED: Kanye West Defends His Support Of President Trump On Jimmy Kimmel Live) 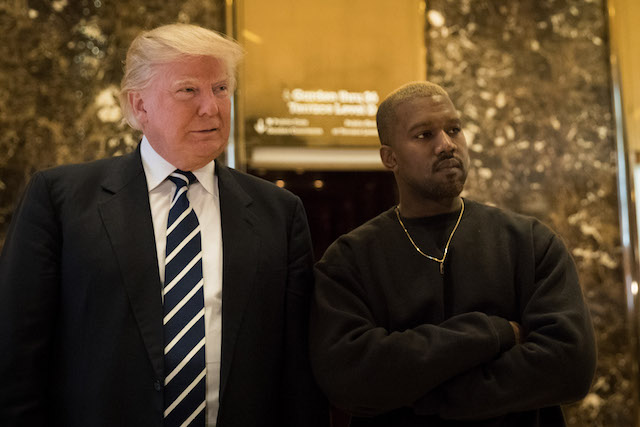 “So honored by this,” he added. ” Thank you Kanye for your support. It is making a big difference!”

Thank you to Kanye West and the fact that he is willing to tell the TRUTH. One new and great FACT – African-American unemployment is the lowest ever recorded in the history of our Country. So honored by this. Thank you Kanye for your support. It is making a big difference!

The comments came after the 41-year-old rapper made his first appearance on late-night TV Thursday since voicing his support for Trump earlier this year.  (RELATED: Colbert Claims Kanye West Has Lost His Mind For Supporting Trump)

During his appearance on “Jimmy Kimmel Live,” West talked about supporting Trump and shared that he wasn’t going to let any liberals “bully” him.

“Just as a musician, African-American guy out in Hollywood, all these different things, you know, everyone around me tried to pick my candidate for me,” West shared. “And then told me every time I said I liked Trump that I couldn’t say it out loud or my career would be over. I’d get kicked out of the black community because blacks–we’re supposed to have a monolithic thought, we can only, like, we can only be Democrats and all.”

“So, I didn’t have the confidence to take on the world and possible backlash and it took me a year and a half to have the confidence to stand up and put on the [MAGA] hat no matter what the consequences were,” the rapper added. “And what it represented to me is not about policies–because I’m not a politician like that.”

1
Grenell Declassifies Document Said To Be 'Very Significant' To Origins Of Russia Probe
Politics
2
'I SURE DID, F*CKER': Kathy Griffin Doubles Down On Hoping Trump Gets Stabbed With Potentially Fatal Air-Filled Syringe
US
3
'Journalists Are Not Above Being Questioned': Kayleigh McEnany Fires Back At Chris Wallace
Media
4
Brit Hume Hits Back At CNN Mask Criticism: Biden 'Looked Ridiculous,' Masks 'Not Necessary' Outdoors
Media
5
Trump Urges House Republicans To Vote Against Spy Tool Used To Snoop On His Campaign
US