Facebook appears to have flagged a New York Post article about supporters of President Donald Trump as “spam.”

“I’ve received nine separate messages from readers telling me the same thing has happened to them,” Zito noted on Twitter.

So this is interesting…@facebook took down my post of my reporting for the @nypost — I’ve received nine separate messages from readers telling me the same thing has happened to them. ‘sup @facebook ?https://t.co/dCwG9HQiJI

A Facebook spokeswoman issued a vague statement attributing the incorrect mark to an unspecified “error.”

“An error affected our automated systems today, which meant that some posts were incorrectly marked as spam. We’ve identified the issue and worked to fix it. We apologize to everyone who’s been affected,” the spokeswoman said.

Some of Zito’s readers reported receiving messages from the social media company claiming the article looks “like spam and doesn’t follow our Community Standards.” (RELATED: Facebook Plans To ‘Dial Up’ Suppression Of Certain News Outlets)

Zito shared the example below with TheDCNF: 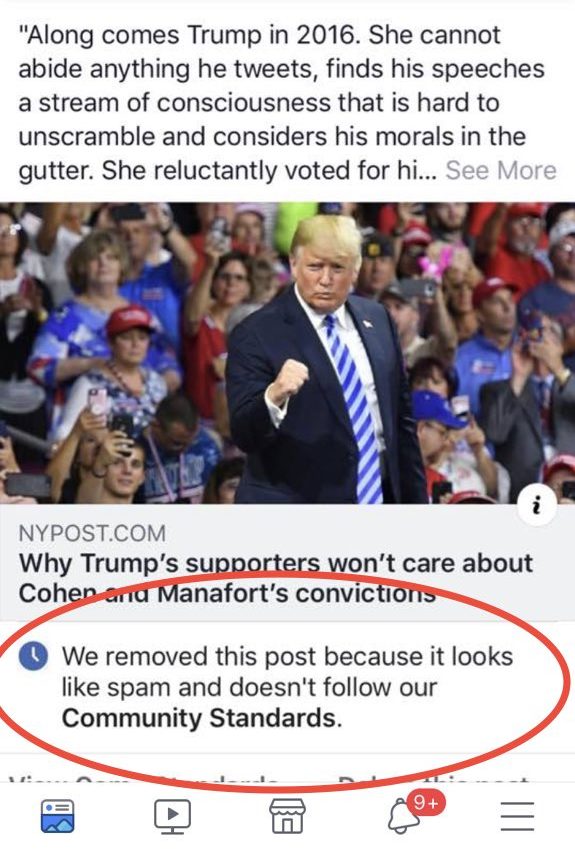 This isn’t the first time that Facebook has inaccurately flagged right-of-center articles as “spam.”

Readers of The Daily Caller in April were blocked from sharing a story on the lost-and-found text messages between FBI agents Peter Strzok and Lisa Page. Facebook blamed its “spam” algorithm for the suppression, which it said was in error.