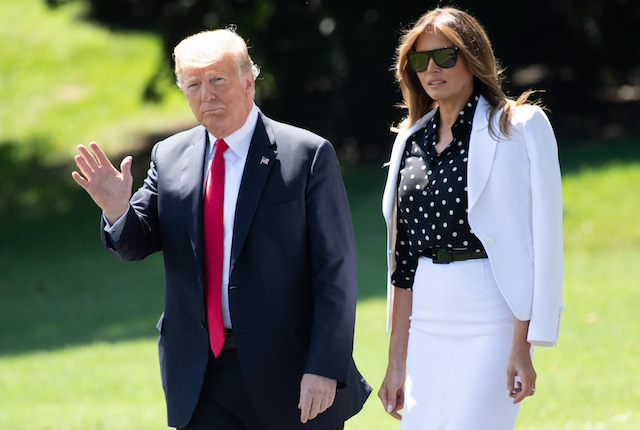 US President Donald Trump and First Lady Melania Trump walk to Marine One prior to departing from the South Lawn of the White House in Washington, DC, August 24, 2018, as they travel to Ohio. (Photo by SAUL LOEB / AFP) (Photo credit should read SAUL LOEB/AFP/Getty Images)

The comments came in response to Rae, who shared in an article published Tuesday with Glamour, how she felt the day Michelle Obama told her how much she loved the Season 2 finale of the show in 2017.

“[Michelle Obama] had just finished watching the finale, and she was like, ‘That fakeout — how could you do that? I thought you and Lawrence were going to live happily ever after,'” the 33-year-old actress recalled.

The then-first lady reportedly told Rae that it was her daughters who turned her on to the show.

“It was like talking to my auntie,” the actress said. “It bums me out that I will never have that feeling again of the first family f******g with us so hard and getting us.”

She then explained that if Trump shared with her that she enjoyed the show, as well, it would be “canceled.”

“If Melania [Trump] said that to me, I would be like, ‘Well, I guess it’s canceled. We’re not making this show. It’s not ours anymore,'” Rae said.