The Washington Post published an article on Friday claiming the Trump administration “sees a 7-degree rise in global temperatures by 2100” based on climate projections used in a regulatory document.

But the dire climate projections The Post attributed to the Trump administration are commonly used in climate studies and analysis, including by government agencies, and actually come from the United Nations Intergovernmental Panel on Climate Change (IPCC).

University of Colorado professor Roger Pielke Jr., author of the book “The Rightful Place of Science: Disasters & Climate Change,” chastised The Post for claiming a news “scoop” for reading a government report using an IPCC projection that’s been around for years.

“This is not news, this is not a SCOOP,” Pielke tweeted Friday. “This is what IPCC said in 2013 under [Representative Concentration Pathways (RCP) ] 8.5, it’s most extreme scenario, one that it no longer uses because it considers it to be implausible.”

“Journalists who do this sort of thing must think people are stupid,” Pielke said. 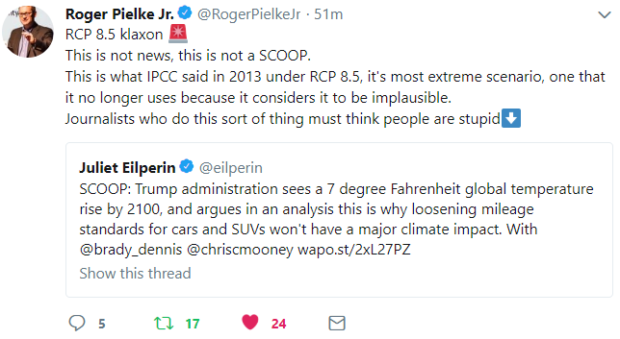 “RCP 8.5 has been ever-present in regulatory and policy discussions since 2013 across administrations,” Pielke tweeted.

The Trump administration announced its plan to freeze Obama-era fuel economy regulations in August. The Post reported the National Highway Traffic Safety Administration’s (NHTSA) regulatory analysis “projects that global temperature would rise by nearly 3.5 degrees Celsius from what it averaged between 1986 and 2005 regardless of whether Obama-era tailpipe standards take effect or are frozen for six years, as the Trump administration has proposed.”

The article went on to quote environmental activists who were reportedly “shocked” at those projections. The Post also claimed that “[f]ederal agencies typically do not include century-long climate projections in their environmental impact statements.”

However, the article does not go into NHTSA’s actual analysis. The agency used a climate model, called MAGICC, that matches the RCP scenarios in the IPCC’s 2013 assessment. (RELATED: EPA Abandons Obama-Era Climate Rule That Brett Kavanaugh Struck Down)

NHTSA’s most extreme MAGICC scenario shows around 4 degrees Celsius, or 7 degrees Fahrenheit, which matches what the IPCC’s RCP8.5 scenario predicts for global temperature rise by 2100.

RCP8.5 is often cited as the “baseline” or “business as usual” scenario for global warming, assuming little to no “action” is taken to reduce greenhouse gas emissions. It was also used by the Obama administration to justify its climate policies.

“RCP8.5 was the Obama [Environmental Protection Agency’s] favorite baseline emission scenario, as it is for the Natural Resources Defense Council and numerous other climate advocacy organizations,” Competitive Enterprise Institute senior fellow Marlo Lewis wrote in August, more than one month before The Post published its “scoop” on the same topic.

For example, EPA used RCP8.5 in its report on the “benefits of global action” on global warming released in 2015. The agency’s “baseline” scenario in that lengthy report mirrored RCP8.5, allowing for dire predictions of climate warming.

EPA also used the MAGICC model, tuned to IPCC RCP scenarios, to estimate the impacts greenhouse gas regulations on heavy-duty trucks would have on projected warming. The agency found those regulations would only lower projected temperatures “approximately 0.0026 to 0.0065°C” by 2100.

“Had EPA and NHTSA shunned RCP8.5 and MAGICC, climate campaigners would bash the agencies for ‘cherry picking’ baselines and models,” Lewis wrote.