Washington & Lee University is replacing prominent portraits of George Washington and Robert E. Lee in military uniform with versions of them in civilian clothing, and will be closing the doors to Lee’s tomb during university events, the school announced Tuesday.

It is also renaming some of its buildings to honor the school’s first tenured female professor, as well as its first African-American graduate.

Following the Charlottesville riots in summer 2017, W&L president William Dudley assembled a commission to “examine how our history — and the ways that we teach, discuss and represent it — shapes our community.”

After “[canvassing] the views of university constituencies,” the group of 12 faculty, staff, students and alumni issued a list of 31 recommendations by which the school might “set a national example by demonstrating how the divisive issues can be addressed thoughtfully and effectively.” 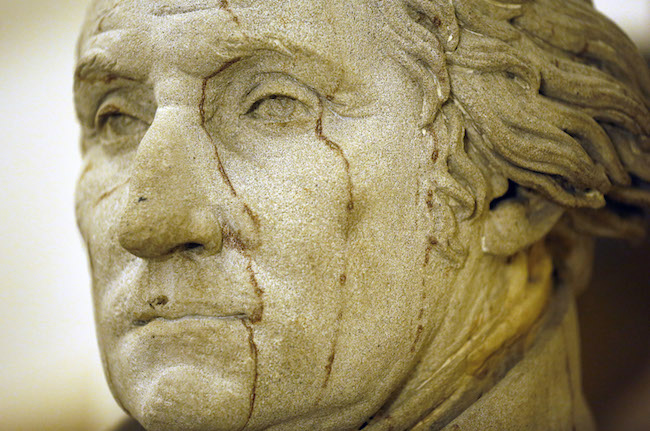 A statue of George Washington, the first president of the United States, is seen near the office of U.S. Speaker of the House John Boehner in the U.S. Capitol building in Washington October 1, 2013. REUTERS/Jim Bourg

Washington & Lee is one of the oldest institutions of higher learning in the South, and the second-oldest college in the Commonwealth of Virginia. It began as a classical grammar school in 1749, and was renamed for George Washington after he gave it a substantial endowment during his second term as president.

Confederate Gen. Robert E. Lee, who was related to Washington by marriage, became president of the university in 1865, the same year of his surrender at Appomattox. He served in that role until his death in 1870, and is entombed on campus beneath the prominent Lee Chapel with much of his family, and his horse Traveller.

The commission’s report went into great detail regarding the history and symbolism of Lee Chapel, as well as the prevailing on-campus attitudes toward the building. It claimed that “by continuing to hold rituals and events in Lee Chapel, the university, wittingly or not, sustains […] the memory of Lee as a commander of the Confederate Army.” (RELATED: Robert E. Lee-Loving, Confederate Flag-Hoisting Student Says He Was Just Expelled)

The commission noted that it “heard repeatedly in its outreach that the effect is problematic for many students, faculty, staff and alumni,” and claimed that “groups of students, professors and staff are uncomfortable in the chapel and avoid attending events there.”

In response, the university has decided that “the doors to the statue chamber [where Lee is buried] in the 1883 addition to Lee Chapel will be closed during university events.” In 2014, the school removed Confederate battle flags from the chapel following protests from some African-American students.

The report also made an extensive catalog of the portraits across the campus, and noted that “in sum, the portraits currently on display shape the visual landscape of the campus and work well within the narrative the university has, up until now, projected: a limited history focused on the 19th century.” (RELATED: Duke University Takes Down Vandalized Robert E. Lee Statue)

“Because the university was founded at a time when educators and students alike were almost exclusively white males, it is understandable that the majority of the portraits and sculptures on campus represent those individuals,” the report continued, and recommended featuring more portraits of women and people of color.

“Portraits of Robert E. Lee and George Washington in civilian clothing will replace the portraits of Lee and Washington in military uniforms that currently hang in Lee Chapel,” the university reported.

The commission also recommended renaming some buildings to honor more diverse demographics, for which reason the school is renaming Robinson Hall after its first African-American graduate, John Chavis. It is also renaming the Jackson-Lee House after Pamela Hemenway Simpson, who was the school’s first female tenured professor.

Despite calls from some that Washington & Lee change its name entirely, the commission concluded that it would be best “that the university not change its name at this time.”