On today’s show, we examine two shining examples of media bias from over the weekend in which headlines deliberately mislead the audience.

NBC News falsely claimed President Trump “praised” Robert E. Lee (he didn’t) and “60 Minutes” falsely claimed Trump said, “It doesn’t matter. We won,” in regard to Christine Blasey Ford. The truth, in those and other cases, was something completely different.

In addition to those examples, a CNN anchor “quoted” President Trump and Donald Trump Jr. as saying, “White men have a lot to fear right now.” Only neither one of them used the word “white”; the CNN “journalist” added that part.

The president and his son were talking about the concept of men being guilty until proven innocent in regard to sexual assault allegations and never mentioned race. That didn’t stop CNN from spreading that lie and feeding the liberal narrative. It was not by accident.

Maybe it’s time the President stop granting interviews to liberal outlets and give exclusives to organizations that will give him a fair shake?

Hillary Clinton claims her husband Bill having an affair with an intern was not an abuse of power because Monica Lewinsky was an adult. Liberals used to say a boss can’t even ask out an employee because of the power discrepancy between the two, but somehow that’s not an issue in the biggest power discrepancy possible — the leader of the free world and an intern. 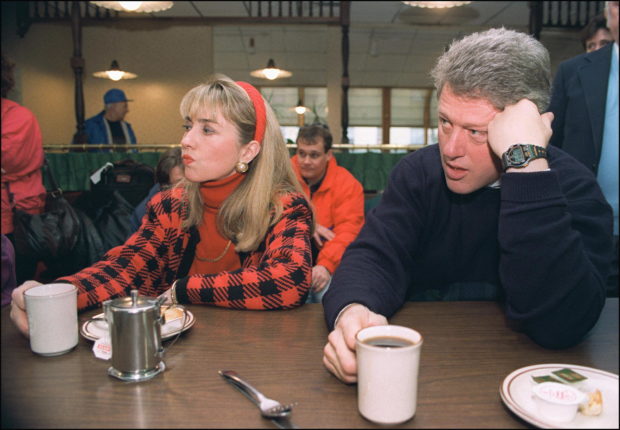 Will Hillary now testify as a character witness for her good friend Harvey Weinstein, who, in addition to being accused of actually attacking women, is accused of using his powerful position to pressure women into sex? Probably not. Like much of the rules the Clintons create, they only apply to them.

The Democratic Gubernatorial candidate in Georgia was talking about the possibility of a “blue wave” for the upcoming midterm elections at a campaign event over the weekend.

The components of the wave, Stacey Abrams said, were pretty much every liberal identity group, but she added that wave “is made up of those who’ve been told that they are not worthy of being here. It is comprised of those who are documented and undocumented.” The “wave,” to the extent that it exists, is about voting, and illegal aliens can’t vote…or at least aren’t supposed to.

Help spread the word about The Daily Daily Caller Podcast. Rate and review on iTunes, share on social media, and be sure to subscribe so you never miss an episode:

Derek Hunter is a columnist and contributing editor for The Daily Caller and author of “Outrage, INC: How the Liberal Mob Ruined Science, Journalism, and Hollywood” from HarperCollins, available now. Pick Up a copy, or several copies, here. Send compliments and complaints to derek@dailycaller.com or follow him on Twitter at @derekahunter.