Early in the interview, Stahl said he’s fantasized “the hurricane situations” changed Trump’s mind on man-made global warming. “What an impact that would make,” Stahl said.

Trump responded, “They say that we had hurricanes that were far worse than what we just had with Michael.” Stahl pressed Trump on what he mean by “they,” and the president responded with “people.”

“60 Minutes” put its interview of Trump in the context of Hurricane Michael, which they claimed “comes on the heels of a series of super storms: Florence in the Carolinas, Maria in Puerto Rico, Harvey in Texas.”

Yet, Trump’s point is correct — the U.S. has seen more powerful, destructive storms than Hurricane Michael, which hit the Florida panhandle on Wednesday. Michael made landfall just below Category 5 strength, putting it in the top four strongest storms to hit the continental U.S.

Meteorologist Philip Klotzbach noted in The Washington Post that Michael’s strength ranked “behind only the three Category 5 hurricane landfalls in the continental United States: Labor Day (1935), Camille (1969) and Andrew (1992).”

“Yeah, but what about the scientists who say it’s worse than ever? Stahl asked Trump during the interview. (RELATED: Are More Hurricanes Hitting Florida? The Data Unequivocally Shows Us The Answer Is No)

Is it “worse than ever” in terms of hurricanes? Meteorologist Roy Spencer wrote in a recent blog post that “there is still no trend in either intensity or frequency of strikes over the last 118 years.” 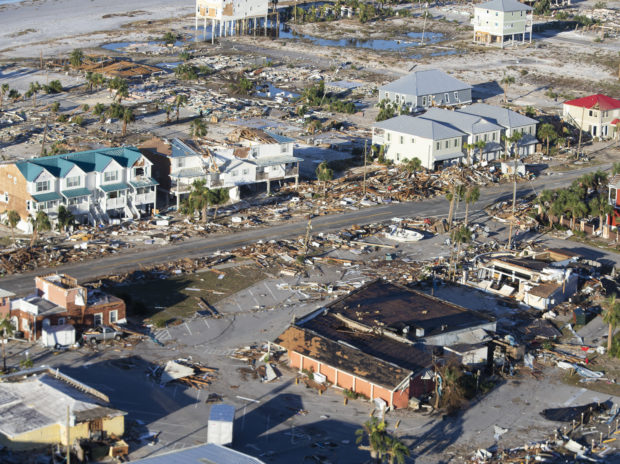 MEXICO BEACH, FL – OCTOBER 12: Homes and businesses along US 98 are left in devastation by Hurricane Michael. (Photo by Mark Wallheiser/Getty Images)

Media outlets and some scientists sharply criticized the president’s remarks that “scientists also have a political agenda.”

“A thermometer isn’t Democrat or Republican. It doesn’t give us a different answer depending on how we vote,” Texas Tech University climate scientist Katharine Hayhoe told The New York Times.

“At its heart, this is just a wacky conspiracy theory,” echoed Andrew Dessler, a climate scientist at Texas A&M University.

What The Times and other outlets neglected to mention, however, was the massive “March for Science” that took place in 2017 in response to Trump’s agenda. That political march brought out 100,000 participants and there are numerous images of Michael Mann, a prominent climate scientist, marching next to Bill Nye “the Science Guy.”

A second science march was planned for this year, but it only attracted 10 percent of the participants as last year’s march. Democratic campaigners tried to use the 2018 march to rile up voters.

Climate scientists has had a reputation of being overly politicized for years. Global warming skeptics and those not in lock-step with the political left say they’ve been routinely targeted and silenced for straying outside the supposed “consensus.”

A group of 60 scientist “campaigners” recently signed public letter calling for the media to marginalize those they disagree with on global warming. The group also said they would no longer debate skeptics on climate science.