Secretary of Defense Jim Mattis reportedly has no plans of leaving his post in the administration, despite rumors from within the White House and comments from President Donald Trump in a Sunday interview.

The news comes over a month after Bob Woodward claimed Mattis compared Trump to a “fifth- or sixth-grader” in a book called “Fear,” released on Sept. 11. Mattis denied Woodward’s allegation.

Trump was also asked if Mattis was on his way out of the administration in a interview with “60 minutes” on Sunday. Trump responded: “He may leave. I mean, at some point, everybody leaves.”

Trump also said Mattis might be “sort of a Democrat.”

“It’s so false,” Trump continued. “It’s fake news. … I’m changing things around, and I’m entitled to that. … I think I have a great cabinet. There are some people that I’m not happy with.” He was then asked if Mattis was one of the secretaries he was “not happy” with. Trump responded, “I have a very good relationship with him. I had lunch with him two days ago.” (RELATED: Trump Calls Mattis ‘Sort Of A Democrat,’ Says He Doesn’t Know When He’ll Leave Cabinet)

However, the Department of Defense says Mattis has no plans on leaving, and Trump would have to fire him, officials told The Washington Post. Chief Pentagon spokeswoman Dana W. White said “he is not going anywhere.” 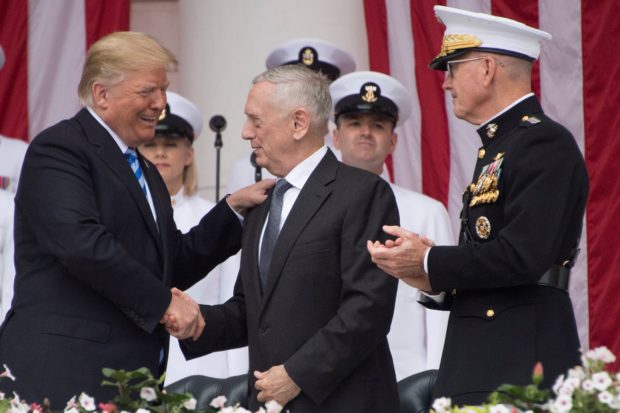 “Secretary Mattis is laser-focused on doing his job — ensuring the U.S. military remains the most lethal force on the planet,” DOD spokesman Col. Rob Manning said in a statement to The Washington Post.

Mattis has served as Secretary of the DOD since Trump was inaugurated on Jan. 20 2017.