At the 2015 Safari Club International convention, my friend Phil Shoemaker — an Alaskan Master Guide known for finding big brown bears — introduced me to two brothers in their 20s. Phil said they were “bush kids,” like his own children, raised in what most Americans would consider cultural desolation, far from convenience stores or cable TV.

Like many young Alaskans, they started hunting quite young with AR-15s in the standard .223/5.56 chambering, popular as starter rifles because of light recoil and stocks adjustable for length-of-pull. Their ARs worked fine on caribou and black bears, so the brothers continued hunting with them, eventually taking bull moose and grizzlies.

On a resupply visit to Anchorage (by far the state’s largest city, causing some Alaskans to call it Los Anchorage) they stopped at a sporting goods store and asked for several cases of .223. While talking with the salesman, he learned they planned to use the ammo on most big game in Alaska. Like many gun-store clerks, the salesman considered himself an expert on the shooting sports, so refused to sell them any because “everybody knows” the .223 isn’t adequate for moose and grizzlies. The brothers shrugged and went elsewhere to buy their ammo.

Many hunters who’ve never even seen a whitetail killed with a .22-250 are equally certain it’s inadequate for deer. They often back up their opinion by claiming .22s are illegal for big game, obviously for good reason — another version of “everybody knows.” If true this might be a point, but .22 centerfires are legal for big game hunting in over two-thirds of the United States, including Alaska.

Some states are even more lenient. When I started hunting big game in Montana in 1966, the regulations read: “There are no restrictions on caliber for rifles used in big game hunting.” Apparently the game commission decided Montana hunters could choose cartridges without their help.

However, neighboring Wyoming only allowed centerfires .24 caliber or larger, with a cartridge at least 2″ long. In 2013 they backed off a little, allowing deer, antelope, mountain lions and wolves to be taken with “any centerfire firearm of at least .22 caliber, using a cartridge at least 2″ long and firing a bullet of at least 60 grains.” The .24 minimum still applies to moose, bighorn sheep, elk, mountain goat, and black bear — though exactly why remains a mystery. Bighorns are just as easy to drop as deer, and black bears aren’t much tougher.

Now, I’m not advocating .22 centerfires for moose and grizzlies. I’ve taken one of each using a .338 Winchester Magnum on the moose and on the grizzly a 9.3mm Barsness-Sisk, a redundant wildcat duplicating the ballistics of the 9.3×62 Mauser. But I also have considerable experience with .22 centerfires on big game, both from pulling the trigger myself and watching others. I’ve only seen one animal wounded with a .22 centerfire, a bull elk shot in the wrong place by a nitwit with an iron-sighted .22-250. Centerfire .224’s are particularly effective on open-country game from pronghorns to mule deer. John’s seen plenty harvested humanely using .22 centerfires. The diameter of a .224 bullet in the .22-250 round (below, right) is about the thickness of a fingernail less than a .243 Winchester’s (below, left). A significant difference? Poor bullet placements and, to an extent, lightly constructed varmint bullets are why some states mandated a legal minimum of .23 caliber after the .220 Swift appeared in 1935, but even back then hunters killed plenty of big game with Swifts. One was the subject of the book Alaska’s Wolf Man, the 1915-1955 Wilderness Adventures of Frank Glaser by Jim Rearden.

Glaser was a market hunter and predator control agent. He bought one of the first Winchester .220 Swifts in Alaska, and it became his all-time favorite for big game from wolves to moose, because with lung shots it killed quicker than any other cartridge he’d tried. While he used the Swift on several grizzlies, he eventually decided the factory bullets were a little too light, once putting 11 into a big bear that charged from close range before it quit.

The late Gene Sherman worked for the Montana game department, and one of his jobs involved shooting elk off ranchers’ haystacks during hard winters. After trying several cartridges, Gene settled on the Swift because bullets placed just behind the shoulder killed elk very quickly, but didn’t exit to possibly wound another animal in the herd.

Yet game departments across the Lower 48 knew the Swift was inadequate for any animal larger than a coyote, often mandating the non-existent .23 caliber as minimum. This resulted, of course, in wildcat .23s. P.O. Ackley’s 1962 Handbook for Shooters and Reloaders lists two, and includes a chapter about using .22 centerfires (and .17s!) on big game.

Ackley knew the real problem, of course, was varmint bullets, the reason he designed the Ackley Controlled Expansion Bullet, similar to today’s “monolithic” bullets made of copper or brass but with a small lead core in the tip. It penetrated fine on big game but apparently accuracy wasn’t great, perhaps because of slow rifling twists. However, even some “varmint” bullets penetrate pretty well. In the 1980s I owned a Ruger 77 .220 Swift and used it on everything from prairie dogs to antelope and deer with 60-gr. Nosler Solid Bases. I never recovered a single bullet.

In 2007 I participated in a month-long South African “cull” hunt on a huge ranch, most of the meat ending up in supermarkets and restaurants. One of the professional hunters involved was Rob Klemp, who owns a sporting goods store in Kimberley, and also makes ends meet by culling springbok in neighboring Namibia.

After getting to know me and my hunting partner Larry Tahler, he asked if we’d like to spend a day culling springbok with his .22-250. The old Sako was on its fourth barrel after taking more than 12,000 animals, mostly springbok — about the size of American pronghorn, similarly colored, and just as tasty.

Rob’s favorite cull ammo is Winchester 55-gr. PSP factory loads, purchased wholesale through his store. While African cullers take head shots when possible, chest shots are often the realistic choice, especially if the culling’s been going on for a while. Larry, a former Army sniper instructor, took the first springbok with a shot behind the shoulder at 350 yards. We found the “varmint” bullet under the hide on the far side, mushroomed as perfectly as any big game bullet I’ve seen recovered. My longest shot was just about 500 yards, the bullet landing in the spine, dropping the springbok right there.

The largest animal taken, however, was a kudu bull with an injured leg. It was Larry’s turn and at 75 yards he put one of the varmint bullets in the kudu’s heart. The bull went 75 yards before stopping, then falling to a second shot, but I’ve seen kudu do exactly the same thing after being shot with 300-gr. bullets from a .375 H&H. In Africa, .22 centerfires are frequently used to cull big game. Larry Tahler used his suppressed .22-250 and factory Winchester ammo to take this springbok at 350 yards. 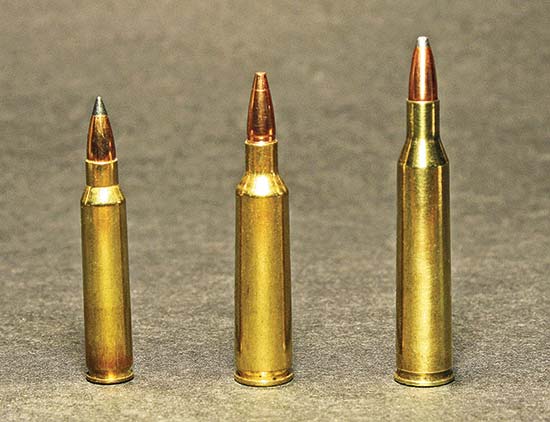 The lightest bullet I’ve seen used on big game was a 40-gr. Cutting Edge Raptor, started at over 4,300 fps from my wife’s Savage .22-250. The Raptor’s a brass monolithic, and Eileen had already shot enough large varmints with the load to know the Raptor wasn’t going to bounce off a pronghorn. She’d drawn a doe tag, and eventually stalked one within 160 yards. At the shot the antelope collapsed immediately, due to the little bullet entering inside the left shoulder, traversing the chest and breaking the scapula on the far side.

In 2018 I drew my first tag for a buck antelope in several years, and since Montana has a 5-week season, I decided to look for the biggest one around. My rifle choice was also a .22-250, one of a special run of Ruger American Rifles with a 1:8 twist commissioned by Whittaker Guns of Owensboro, Kentucky. The twist allowed me to use the 70-gr. Hornady GMX, a more wind-resistant monolithic with a ballistic coefficient of .350, similar to flat-based 6mm spitzers weighing 100 grains.

Hodgdon Superformance powder pushed the GMX to 3,400 fps, considerably faster than 100s from a .243 Winchester. This came in handy, because our pronghorn area mostly consists of a miles-wide flat, where it’s difficult to approach mature bucks. After several days of watching I finally crawled within 350 yards of the biggest, a relatively easy shot with the fast handload.

Some hunters still ask why anybody would use a .22 when bigger, “better” cartridges exist. Gee, that’s a toughie. A 6mm bullet’s diameter is about the thickness of a human fingernail wider than a .224, and my .22-250 not only shot flat and accurately, but the “underweight” 70-gr. GMX left a 1″ exit hole. The buck staggered 30 yards before falling, pretty much like the dozens of antelope Eileen and I’ve taken over the past 35 years with bigger cartridges, from the .243 Winchester to .300 WSM.

Perhaps somebody else can explain why one of those would have worked better.