“In response to her inappropriate actions Dr. Susan Feiner has been notified that she is now barred from teaching at the University of Southern Maine, a prohibition that will be upheld by the other campuses of the University of Maine System as well,” USM President Glenn Cummings said in a statement Wednesday, the Portland Press Herald reported.

Cummings added that no campus resources were used for the “unauthorized class that advanced her personal political agenda,” according to the Herald. (RELATED: Feminist Class At Barnard Called Out For Not Representing Transgender Individuals)

“My goal w/the class was to create opportunity for students to see the federal government at a moment of crisis…where the foulest of misogyny running up against the lived experiences of millions of women & men, girls & boys,” Feiner said in a text to The Daily Caller News Foundation. “As the chant goes: show me what democracy looks like — this is what democracy looks like.” 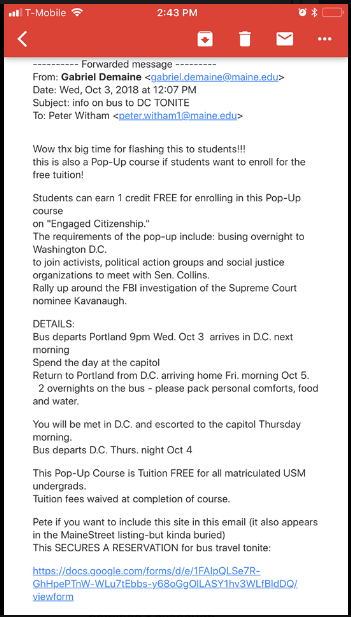 USM students could earn one free credit for enrolling in the pop-up course “Engaged Citizenship,” according to an email obtained by the Maine Republican Party.

“Rally up around the FBI investigation of the Supreme Court nominee Kavanaugh,” the pop-up course’s description said.

Cummings was unaware of the course being offered and stopped it immediately, according to his press statement from Oct. 4.

“University policy makes it absolutely clear that our public, taxpayer funded institutions must be non-partisan in terms of political activity and institutionally impartial in all political, religious and social matters that are unrelated to our universities’ core mission of education, research, and public service,” Cummings said in the statement.

Feiner said she will not appeal the university’s decision. She was a tenured professor in economics for 21 years and retired in September.

Feiner also said “hundreds of thousands (of dollars) in planned giving is gone,” according to the Herald.

Retired faculty can teach a course or two after they retire, the Herald reported.

USM did not immediately respond to TheDCNF’s request for comment.