When I first learned of my acceptance to Yale to study history and religion, I expected that I would be entering a much different environment than that of my undergraduate alma mater, University of California, Berkeley.

At Berkeley, I experienced first-hand the most extreme outbursts of campus and left-wing illiberalism that have gained national prominence over the past few years. As an active member of the Berkeley College Republicans, I participated in the organizing of the Feb. 1 Milo Yiannopoulos event that ended in a night of rioting that left hundreds of thousands of dollars of damage to university property and the city of Berkeley.

I expected that no other university could match the stalking, harassment, outright physical assault, intimidation and slander that I experienced during my time at Berkeley. While I was correct on those counts, I didn’t realize how effective the activity of the Berkeley College Republicans had been in ingraining a culture of open political debate on that campus. 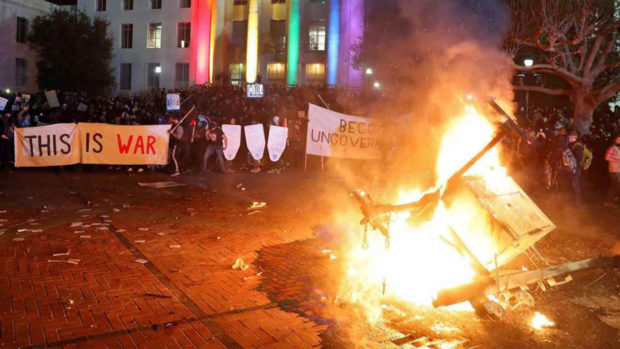 At Yale, notable as the alma mater of conservative hero William F. Buckley and the subject of his famous book, “God and Man at Yale,” there is a striking lack of almost any political activity on campus except the typical, homogenous left-wing victim culture that informs and predominates at most elite universities in America today.

The only notable public political activity that I have seen in my first few months on campus centers on one particular alumnus of Yale, the recently seated Supreme Court Justice Brett Kavanaugh.

While attending a class at Yale Law School, I saw up-close how the law school’s student body was reacting to the prospect of one of their peer’s elevation to the highest court. Classes were canceled, investigations and denunciations were demanded, sit-ins and protests were executed, safe spaces were organized, signage denouncing Kavanaugh was on every wall and discussion about Kavanaugh’s taste for beer could be heard around every corner. 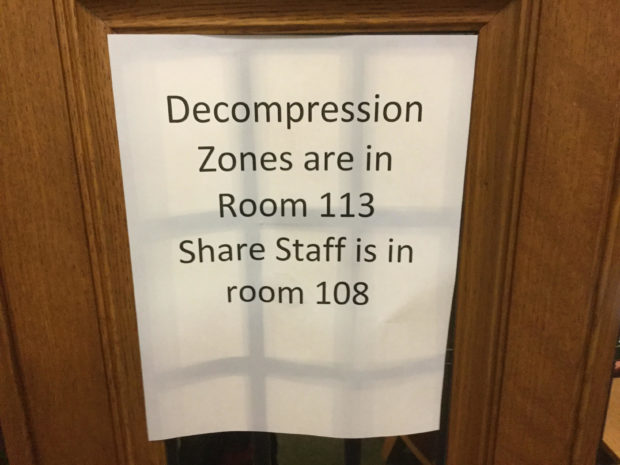 While all of this is not surprising, what I found deeply disturbing was the apparent total embrace by almost all the students I spoke to of what Harvard Law School professor, Alan Dershowitz, calls “Sexual McCarthyism” — the assertion that the marginalized identity of women as victims demands that one should uncritically “believe all survivors.”

This message, which has come to be identified as the central rallying cry of the broader #MeToo movement in the past few weeks, seems to hold the status of unquestionable orthodoxy among many Yale students.

While this gnomic imperative masquerading as a new secular dogma for our age is disturbing enough, this “Believe All Survivors” movement has spread rapidly since Kavanaugh’s confirmation across the Left.

This is especially troubling, as many conservatives (such as California’s Victor Davis Hanson) have pointed out, because it essentially abandons the entire western tradition of law and social relations that extend dignity and legal respect on the basis of citizenship, not gender or some other personal taxonomy, and establishes a legal process to determine guilt or innocence, not mystical incantations. 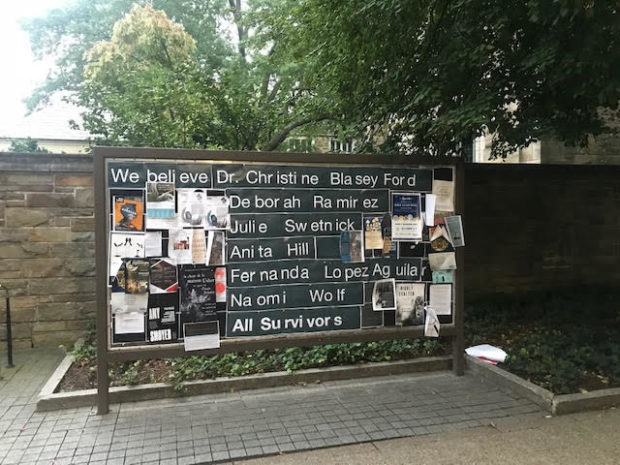 The essentially sacramental character of this suggested transformative purgation of the body politic through submission to every accusation of sexual misconduct, no matter how unsubstantiated or ridiculous (see Michael Avenatti’s allegations against Kavanaugh), has expectedly taken on cultic trappings on Yale’s campus.

Sometime in the past few weeks, a group of Yale students decided they would take it upon themselves to commandeer every public poster board by sweeping them clean and installing giant composite signs that say, “We believe Dr. Christine Blasey Ford,” Michael Avenatti’s client “Julie Swetnick,” and expectedly “All Survivors.”

While clearly violating the rules regarding the use of the poster boards in both size and (lack of) content, the Yale community is prepared to vigorously defend these sacred totems, as I personally found out when I removed one of these posters.

I was immediately denounced across the Yale campus, and the student newspaper, the Yale Daily News, took it upon themselves in their article about the incident to republish whatever false allegations of fascism Antifa-aligned websites from Berkeley had to say about me and the Berkeley College Republicans. 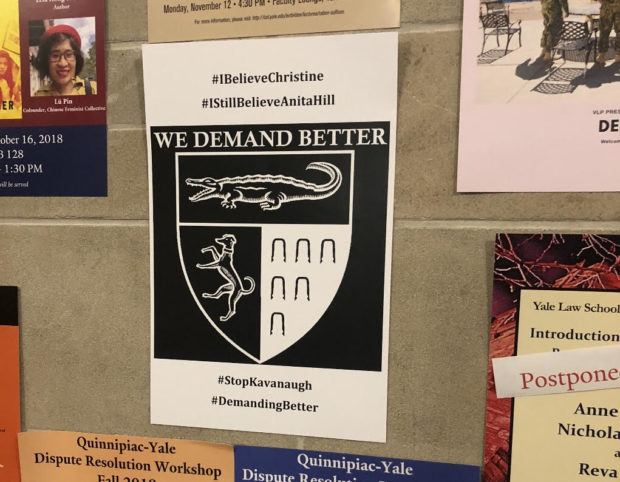 While I quickly learned my sacred obligations and apologized for potentially violating the free speech of others, no one seems to care that the same respect is not even considered for those of the opposite political persuasion (signs supporting Kavanaugh are immediately taken down) and that their installation involved removing every sign that existed before their placement.

Meanwhile, the cult has merely expanded its occupation of sacred space. Since my attempt to remove one of these signs, a legitimate shrine has been installed right across from the entrance to the Sterling Memorial Library on top of and around a fountain.

Chalked into the ground, the messages “We Believe” and “Solidarity With Survivors” surround the fountain, which is adorned with flowers and notes left by Yale students expressing support for the broader #MeToo movement and the general “struggle.” Such meaningful and profound messages as “I believe that we will win.” and “We believe you. We hear you. It’s never your fault. We support you.” are strewn across the edifice. 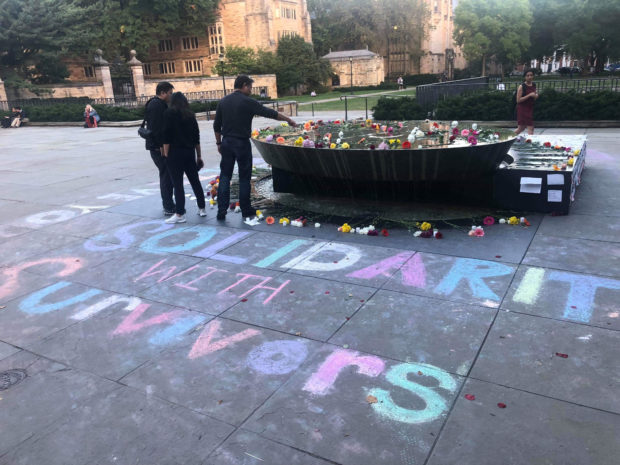 I assume this shrine will last for quite a long time, as long as the particular victim group of the month continues to be women who allege sexual misconduct, but I remain deeply disturbed by what these particular manifestations of the emerging victim paradigm on elite campuses herald for our future.

While Yale does not witness the same type of abject and transparent left-wing thuggery that UC Berkeley does, Yale like Berkeley is very much a part of the broader movement across elite institutions toward embracing identity politics and illiberal victimhood as the new secular creed.

The American university, and America itself, was established on the older “American creed” of liberalism and enlightenment values that sought to treat people as individuals, not groups; as citizens, not victims or oppressors; and on the basis of truth, not sacred knowledge.

In a statement issued by the Yale Divinity Student Government Executive Board following my removal of the sign, they explained that their focus was not on concerns regarding free expression but on “centering the voices of disenfranchised groups” such as sexual assault survivors. 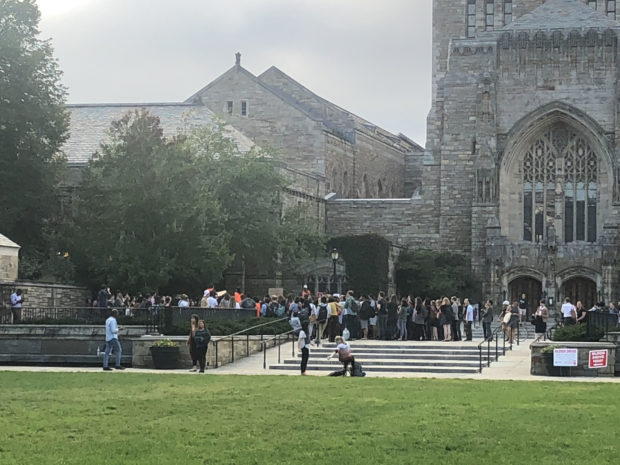 I fear that the displacement of the sacred pursuit of truth for the elevation of the sacred victim is exactly what we are witnessing on the American university and at Yale today.

Jack Palkovic is a graduate student, MAR History of Christianity and fellow of the William F. Buckley Program at Yale.