North Dakota Democratic Senator Heidi Heitkamp is reportedly in hot water after she released someone else’s information without their consent on Tuesday.

In a Facebook post Tuesday night, Heitkamp shared her experience meeting Lynn Aas, a World War II veteran. The senator was in attendance  for when Aas was presented with “the French Legion of Honor award for his service in France.” The post goes on to describe his service during WWII and him continuing his education in North Dakota. 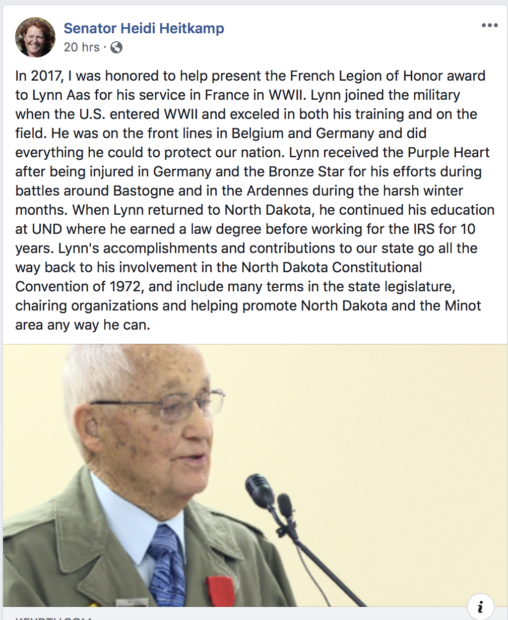 “Lynn is not happy that Heidi did this. We have posted a comment requesting that it be taken down,” David Aas, Lynn’s son, told Rob Port on Wednesday. “Lynn wants to make it clear that no one from the Heitkamp campaign contacted him to ask for permission for this, and he does not want this to be viewed as an endorsement of her campaign.”

Heitkamp’s communication director, Abbie McDonough, told The Daily Caller, “This story is wrong and is gutter politics at its worst. A link to a local news article was posted on Sen. Heitkamp’s Senate Facebook page about a ceremony she participated in last year for a WWII veteran to highlight a recognition he earned. An individual photo was not posted. The way social media works is that if you post a link to an article, the photo in the article also shows up in the post. Let’s talk about facts rather than distortions or political games.”

She added that, “We took the post of the article down after the veteran’s son asked us to via Facebook.”

“In fact, at the event, Mr. Aas joked with Sen. Heitkamp that he liked her, but isn’t going to vote for her. They both shared a laugh, and she retold the story at the event. In North Dakota, you can still recognize the service of an honorable man from a different political party without playing politics,” McDonough went on.

Last week, Heitkamp published an open letter directed to her Republican challenger Kevin Cramer trying to prove how important it is to believe sexual assault survivors. But, in the letter, she published over 100 peoples names outing them as “survivors of domestic violence, sexual assault, or rape,” without their consent. (RELATED: Heitkamp Apologizes For Running Ad Naming Alleged Sexual Assault Survivors Without Their Permission)

Heitkamp said she practically suspended her campaign in the immediate aftermath to apologize to each person she outed. (RELATED: Sexual Assault Survivor Outed By Sen. Heitkamp Says The Senator Lost Her Vote)