A woman who Michael Avenatti claimed backed his client Julie Swetnick’s allegations against Supreme Court Justice Brett Kavanaugh has recanted her story and is accusing Avenatti, a potential 2020 presidential hopeful, of “twisting” her words.

The saga is laid out in a new report from NBC News, which interviewed Swetnick on Oct. 1, days after Avenatti released a sworn declaration in which she accused Kavanaugh of sexual misconduct in the 1980s.

In an effort to bolster Swetnick’s allegations, Avenatti put NBC reporters in touch with the second woman for a phone interview on Sept. 30. He published her sworn declaration on Twitter on Oct. 2.

But according to NBC, the woman’s statements during the Sept. 30 interview were inconsistent with the declaration published by Avenatti.

The report comes in the wake of Senate Judiciary Committee Chairman Chuck Grassley referring Avenatti and Swetnick to the Justice Department and FBI for an investigation into whether they conspired to make false statements to Congress regarding Kavanaugh. (RELATED: Grassley Refers Avenatti And His Client To DOJ For Investigation)

Grassley cited Swetnick’s NBC News interview as an example of her back tracking on her initial claims about Kavanaugh.

In a sworn declaration provided to the committee through Avenatti on Sept. 26, Swetnick alleged that Kavanaugh spiked drinks at parties in the 1980s where girls were gang raped.

Swetnick claimed that Kavanaugh and his friend, Mark Judge, purposely caused girls “to become inebriated and disoriented so they could then be ‘gang raped’ in a side room or bedroom by a ‘train’ of boys.”

Swetnick also claimed that she saw Kavanaugh, who was in high school at the time of the alleged incidents, groping and mistreating girls at the parties. She said she saw Kavanaugh waiting in line to gang rape girls. (RELATED: Brett Kavanaugh Accuser’s Story Is Full Of Holes)

Kavanaugh vehemently denied the allegations, as well as claims of sexual misconduct from two other women they said he knew in high school and college. The conservative judge was confirmed to the Supreme Court on Oct. 6.

Swetnick and Avenatti claimed that witnesses would back up her allegations. Under pressure to produce those witnesses, Avenatti put NBC in contact with the second woman.

In her Oct. 2 declaration, the woman said: “During the years 1981-82, I witnessed firsthand Brett Kavanaugh, together with others, ‘spike’ the ‘punch’ at house parties I attended with Quaaludes and/or grain alcohol. I understood this was being done for the purpose of making girls more likely to engage in sexual acts and less likely to say ‘No.'”

She also claimed that Kavanaugh was “overly aggressive and verbally abusive to girls. This conduct included inappropriate physical contact with girls of a sexual nature.”

But according to NBC News, the woman said in her Sept. 30 phone interview that she “didn’t ever think it was Brett” who spiked punch at parties.

The woman also told reporters that she did not know Swetnick in high school. They became friends when they were in their 30s, she said. The woman also said that, though she knew who Kavanaugh was in high school, she never saw him behave inappropriate towards girls.

Two days after Avenatti published the woman’s declaration, she told NBC that “it is incorrect that I saw Brett spike the punch. I didn’t see anyone spike the punch…I was very clear with Michael Avenatti from day one.” 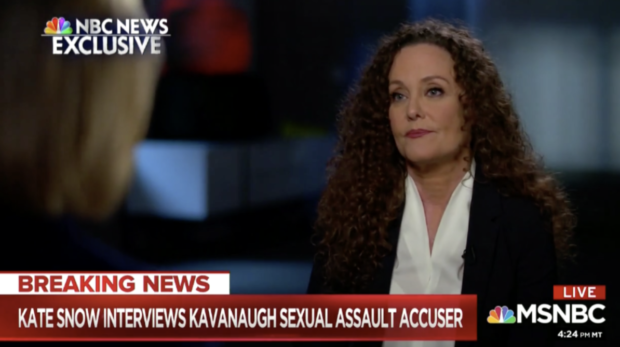 “I would not ever allow anyone to be abusive in my presence. Male or female,” she added.

Asked about the discrepancy, Avenatti lashed out at NBC’s reporters, saying that he was “disgusted” by their questions.

NBC also reports that Avenatti made inconsistent statements about the second woman after he released her declaration on Oct. 2.

Avenatti initially confirmed to the network that the woman who issued the declaration was the same who spoke to reporters on Sept. 30. But when asked about discrepancies in her stories, Avenatti told the reporters: “How about this, on background, it’s not the same woman. What are you going to do with that?”

But on Oct. 5, the woman told NBC News that she would no longer be communicating with Avenatti.

“I will definitely talk to you again and no longer Avenatti. I do not like that he twisted my words,” she said.(RELATED: Nine Times The Media Pushed Disinformation About Kavanaugh)

Several questions remained unanswered following the report. It is unclear why NBC News did not report the discrepancies earlier. It is also unclear why Swetnick identified the second woman as a potential witness to Kavanaugh’s behavior.