The former Catholic bishop of Memphis, Tennessee, accused Cardinal Donald Wuerl of orchestrating his Wednesday removal as revenge for thwarting his appointment to Vatican secretary of state.

Pope Francis forced Bishop Martin Holley to resign following an investigation into decisions to reassign 40 priests within the Memphis diocese and appoint Father Clement Machado as vicar general, moderator of the curia, and diocesan chancellor. Holley asserted that his removal was not truly a response to his “management of the diocese,” as Vatican spokesman Greg Burke said, but revenge from Wuerl for telling Pope Benedict XVI that Wuerl was unfit to be Vatican secretary of state. (RELATED: Virginia Launches State-Level Investigation Of Catholic Church)

“I stood in his way for something he wanted,” Holley said, according to Catholic News Agency.

Holley claimed that Benedict had considered appointing Wuerl to the high-ranking Vatican position in 2012 but first asked Holley, who then served as an auxiliary bishop in the District of Columbia, for his appraisal of Wuerl. Holley said Wuerl has treated him with “disdain” ever since he told Benedict that Wuerl wasn’t fit for the role.

As for how Wuerl could have orchestrated Holley’s removal, Wuerl is one of only two American cardinals serving on the Vatican’s Congregation for Bishops, which oversees “the correct exercise of the pastoral function of the bishops” worldwide, sometimes by initiating “general apostolic visitations where needed” and applying action based on the reports of those visitations.

Ed McFadden, Wuerl’s spokesman, said that an apostolic visitation to the Diocese of Memphis was, in fact, connected to Holley’s forced removal.

“It would appear that an apostolic visitation that took place in the Diocese of Memphis in June, and the results of that process, may have had some connection to Bishop Holley’s dismissal,” McFadden said. 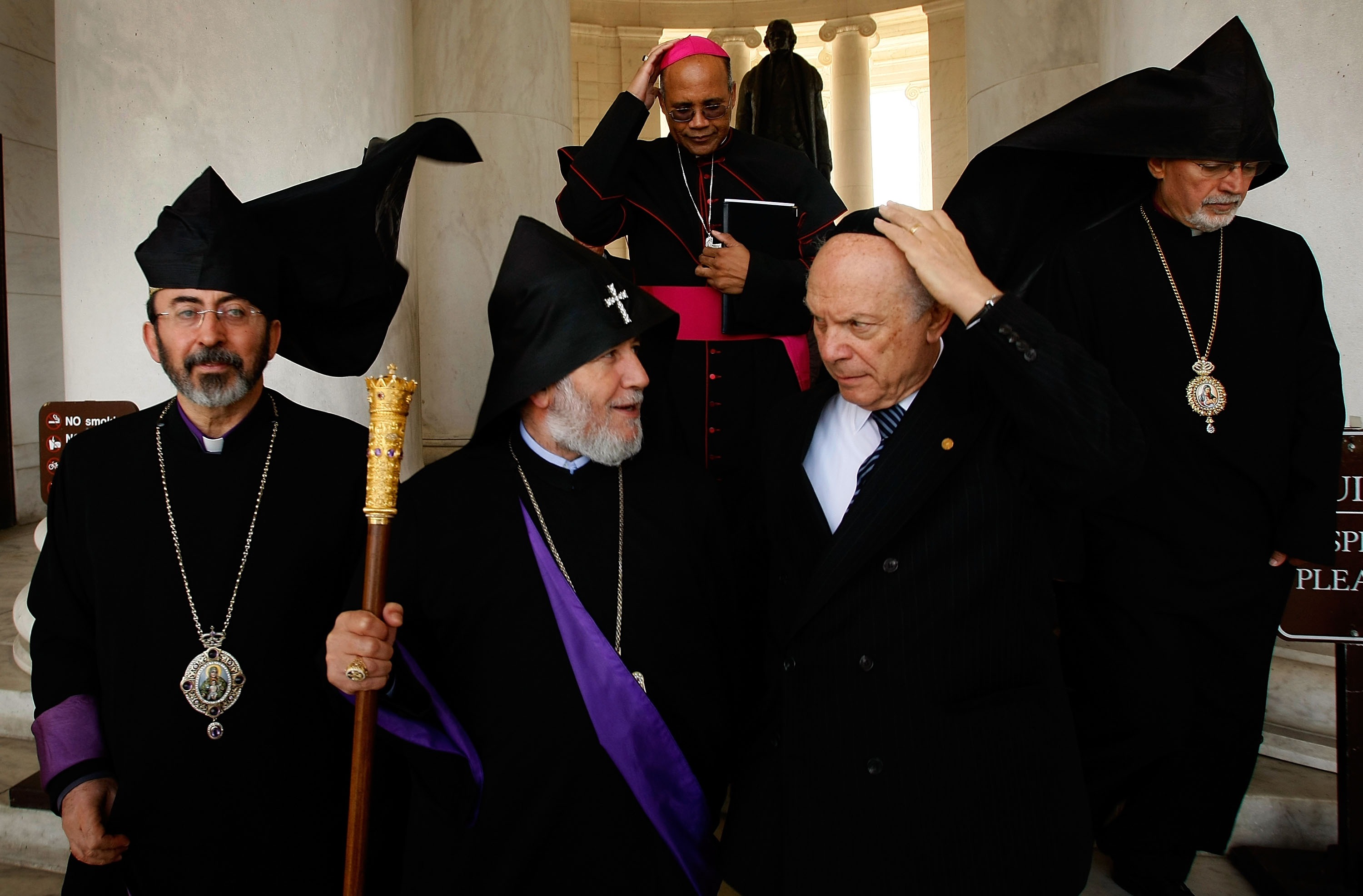 WASHINGTON — OCTOBER 11: Catholicos Karekin II (2nd L), Supreme Patriarch and Catholicos of All Armenians meets with religious leaders of other faiths during a brief tour of the Jefferson Memorial Oct. 11, 2007 in Washington, D.C. During the final day of his tour to the United States, Catholicos Karekin II delivered a speech in front of the memorial on religious freedoms. Also pictured are Rabbi David Saperstein (2nd R) of the Religious Action Center and Bishop Martin Holley of the Archdiocese of Washington (C). (Photo by Win McNamee/Getty Images)

Holley said church officials told him the visitation was meant to “assist” him. “I didn’t need any assistance,” he said.

Vast disorganization of the diocese under the previous bishop was left to Holley to set right, he said. When Holley, who is black, started instituting changes to diocesan organization, he faced challenges from the “racism of a few priests.”

He also asserted that much of the troubles within the diocese, like the closure of the Jubilee Catholic Schools Network, were the result of past mismanagement set in motion before Holley was assigned to Memphis. As for the controversy concerning Machado’s swift installment, or incardination, in the diocese, Holley said that was not the primary issue.

“Machado is not and was not the problem,” Holley told CNA. “If I’ve known him for this long, why would I not incardinate him?”

Nor was a past allegation against Holley of sexual misconduct the issue, according to both Burke and Holley. Holley said that when he became aware of the allegation while serving in D.C., he reported it directly to Wuerl and also to former Cardinal Theodore McCarrick who told him “not to worry about it.” Holley said he never heard anything about the allegation after that.

While details of the process by which Francis had Holley removed remain unclear, Holley said he is clear on one fact — the sinister nature of the affair.

“There is evil at work here,” he said. “This is a spiritual battle.”