ABC “The View” co-host Meghan McCain pretty much gets a free pass on anything short of giving Joy Behar a wedgie right now. Each day, she counts the number of days that have passed since her father, Sen. John McCain‘s (R-Ariz.), death. Sometimes she recounts a memory. Mostly she just shares just how goddamn hard it is to live without him. 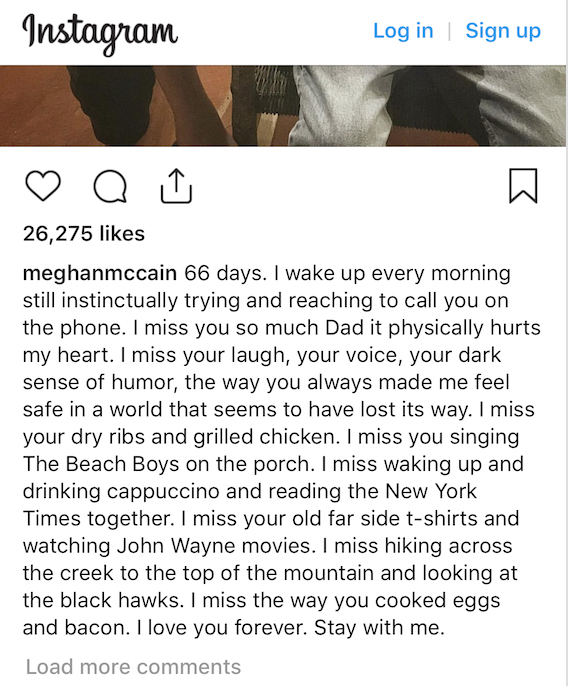 Many of her followers are on board with the public display of the depth of her sadness. As you can see, some 26,000 people liked her outpouring of grief.

One cheerleader is The Daily Mail columnist Piers Morgan, who wrote her on Twitter, saying, “Good for you @MeghanMcCain. Your father was one of the greatest people I’ve ever known. Your loss must feel overwhelming. Just know you’re not alone – we all miss him.”

But occasionally there’s an ant in the ointment.

The complainer isn’t entirely coherent, but you get the idea.

Coolncalm writes, “Why are putting these private thoughts on Facebook Meghan?We all miss our fathers who have passed on. @TheView We cry out girls dads too. You are not that special.”

I despise the concept of counting “likes” and “retweets.” But the idiot got some 2,000 likes and 94 retweets.

To her credit, Meghan actually remained exceptionally cool and calm in her response. However, she didn’t remain so calm when The Raw Story recently tried to portray her as a lush and misstate her stance on the recent bomb threats.

I don’t believe I am special – far from it. There are many of us who are in grief and have lost those love love so deeply. But it makes me feel less alone and hopefully others less alone to share the grief process that is still so taboo to some. https://t.co/Rv0JxDnOxw