The 2018 midterm elections are one week away, and both Democrats and Republicans are gearing up for some extremely tight races across the country.

According to a majority of polling, Republicans are expected to lose control of the House but keep control in the Senate after the Nov. 6 midterm elections. However, there is growing speculation that Republicans could be more successful than polls suggest.

In the Senate, there are six seats that are currently listed as “toss up” elections, four of which belong to current Democratic senators, according to Real Clear Politics. Republicans need to maintain 51 seats in the Senate in order to keep majority.

What to watch for:

Five of the candidates in those “toss up” Senate races are incumbents, including Democrats Jon Tester of Montana, Bill Nelson of Florida, Joe Donnelly of Indiana, Claire McCaskill of Missouri, and Nevada Republican Sen. Dean Heller. The Senate race in Arizona is also listed as a toss-up, as Republican Rep. Martha McSally is running against Democratic Rep. Kyrsten Sinema for GOP Sen. Jeff Flake’s seat, who announced in October 2017 that he would not seek re-election.

Democrats have been predicting a “blue wave” for the midterm elections, hinting that they will win back a majority in the House and pick up a large number of seats in local state races and gubernatorial races across the country.

In the House, there are 32 seats that are listed as “toss up” elections. Democrats must pick up at least 24 seats in order to get to the 218 seats needed for majority.

While Democrats are expected to win control of the House, Republicans could pick up a few Senate seats from toss up races.

If Democrats do win the House, the party will have to select a Speaker. House minority leader Nancy Pelosi has previously said she thinks she’ll be the next Speaker of the House, despite comments from Democratic Reps. Kathleen Rice of New York, Seth Moulton of Massachusetts, Filemon Vela of Texas and Tim Ryan of Ohio, who have all called for Pelosi to relinquish her leadership role.

If Republicans maintain control of the House, majority leader Kevin McCarthy hopes to become the next speaker, but some Republicans have said they want to see Majority Whip Steve Scalise or House Freedom Caucus Chairman Jim Jordan in the position. 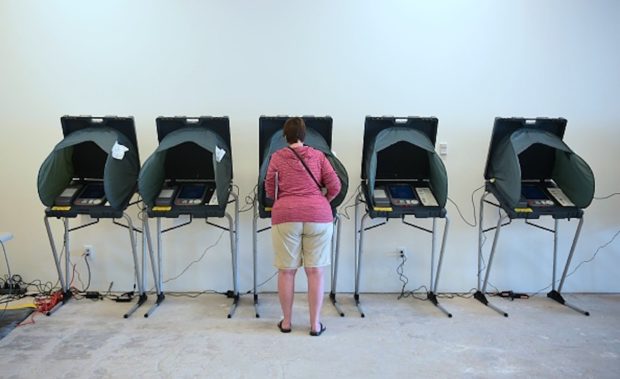 In Missouri, Republican state Attorney General Josh Hawley has a two-point lead over McCaskill after she faced criticism over an ad that says she’s “not one of those crazy Democrats.” McCaskill also was using a private jet while she said she was on an RV campaign tour of the state.

News also broke in late October that her husband had been accused of domestic violence by his former wife. (RELATED: Claire McCaskill’s Husband Accused Of Hitting, Tripping, Peeing On Ex-Wife)

In Indiana, Donnelly is also behind in the polls against his Republican opponent, Mike Braun. Donnelly has portrayed himself as a moderate Democrat, but voted against President Donald Trump’s Supreme Court nominee Brett Kavanaugh, which Braun believes helped him in the polls.

Republican Gov. Rick Scott is in a tight race with Nelson, as he is trailing by just two points. Scott has attacked Nelson for failing to pass legislation in the Senate and has criticized him for the way he handled the Kavanaugh nomination process.

Texas Democratic senatorial candidate Rep. Beto O’Rourke, who is running against incumbent Sen. Ted Cruz, has raised over $69 million to try and secure a victory in the deep red state. However, O’Rourke  remains down by over six points, despite the historic fundraising numbers.

In Minnesota, Democratic Rep. Keith Ellison is sitting behind his Republican opponent Doug Wardlow for attorney general by a seven-point margin. Ellison, who also serves as deputy chairman of the Democratic National Committee, sits at 36 percent compared to Wardlow’s 43 percent, according to a Star Tribune/Minnesota Public Radio (MPR) poll released October 23.

This comes as Ellison led Wardlow by around five points as of Sept. 19, according to an earlier Star Tribune/MPR poll, meaning there was a 12-point shift in just over a month.

Another big race to watch will be the Georgia gubernatorial election, where Democratic candidate Stacey Abrams is taking on Secretary of State Brian Kemp. Abrams faces a tight race against Kemp, as she has taken heat for saying the alleged “blue wave” Democrats are expecting in the 2018 midterm elections is filled with “documented and undocumented” voters.

Abrams has also spent hundreds of thousands of dollars of her own money trying to secure a victory. She previously served as the minority leader of the Georgia House of Representatives.

The Nov. 6 midterm elections will be a big indicator as to how Trump’s support helps GOP candidates, as he has endorsed dozens of candidates across the U.S. and has held campaign rallies for many others throughout the last several months.