President Donald Trump answered questions Wednesday about Kanye West after the rapper said he was “distancing himself from politics” and focusing solely on being creative.

As Trump was leaving the White House to board Marine One headed for a rally in Fort Myers, Florida, the president said that he and the 41-year-old rapper “get along great, he’s a good guy,” per a White House pool report. (RELATED: Kanye West Defends His Support Of President Trump On Jimmy Kimmel Live) 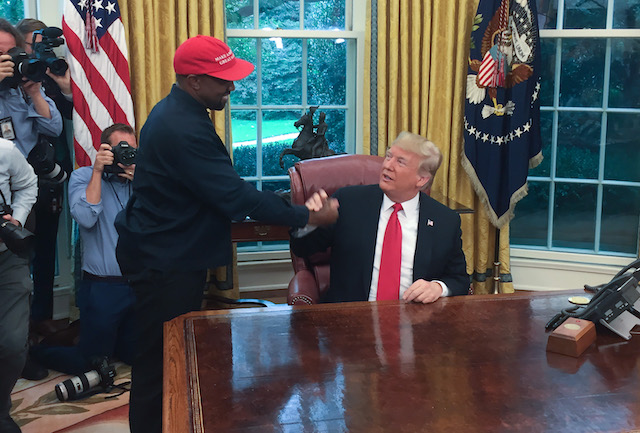 The comments came in response to West tweeting Tuesday that his eyes were “now wide open” and he was done with getting involved with politics.

“My eyes are now wide open and now realize I’ve been used to spread messages I don’t believe in. I am distancing myself from politics and completely focusing on being creative,” West tweeted.

Immediately after, several outlets assumed that the post meant the “Gold Digger” hitmaker was proclaiming that he was done with the president and no longer supported him.

West came out a short time later and let TMZ know that his tweets never mentioned Trump and that it his comment about being “used” was only about Blexit.

As previously reported, before the politics post, West shared with his followers that he had “nothing to do with the Blexit t-shirts, referencing a report that surfaced over the weekend about him reportedly being involved with the line of apparel. The term refers to encouraging African-American voters to “exit” the Democratic party, a shortened version of “black exit.”

I introduced Candace to the person who made the logo and they didn’t want their name on it so she used mine. I never wanted any association with Blexit. I have nothing to do with it.

Owens has since come out and said that she never claimed West’s involvement and she would like to “publicly apologize to him for any undue stress or pain the effort to correct that rumor has caused him, his business relationships, or his family. He simply never designed them.”

At an Oval Office earlier this month, West praised Trump as he shared how it made the rapper feel like “Superman” when he wore the Make America Great Again cap.