The president was speaking to reporters before taking off for his rally in Fort Myers, Florida on Wednesday.

“Birthright citizenship is a very, very important subject. In my opinion, it’s much less complex than people think, it says it loud and clear, in the Constitution, that you don’t have to go through the process of whatever they’re talking about. And by the way, this is not a constitutional amendment,” Trump stated. (RELATED: Fact Check: Is The US The Only Country With Birthright Citizenship?)

He continued, “You don’t need a constitutional amendment, birthright citizenship. I believe that you could have a simple vote in Congress, or it’s even possible in my opinion, this is after meeting with some very talented legal scholars, that you can do it through an executive order.”

The president recently raised the issue during an interview with Axios’ Jonathan Swan on Monday night. In the interview, Trump explained that he doesn’t believe there is a need for a constitutional amendment to overturn birthright citizenship. 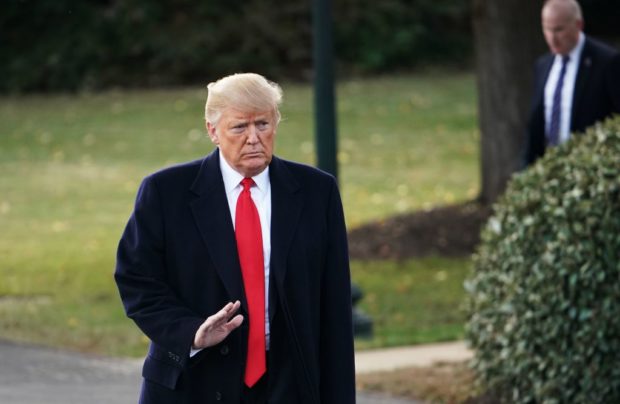 US President Donald Trump makes his way to address reporters before boarding Marine One on the South Lawn of the White House in Washington, DC on October 31, 2018. (MANDEL NGAN/AFP/Getty Images)

“I’d rather do it through Congress, because that’s permanent. But we can certainly do it through, I really believe we can do it through executive order,” Trump added. “One other thing, if President Obama can get DACA approved, if you look at DACA where he actually said, well, this isn’t legal or this I can’t do but I’ll do it anyway, and then he gets a judge to approve it, and it’ll ultimately be decided by the Supreme Court, I hope quickly. But certainly, if he can do DACA we can do this by executive order.”

“With that being said, I think Congress will ultimately act. But I may very well do it by executive order. So you understand, a person comes in, was never in our country before, has a baby, and now all of a sudden the baby is a U.S. citizen and through chain migration and other things many other people come in through the baby,” he concluded.