Tucker Carlson got into a heated debate on Friday with the lawyer who filed a lawsuit against President Donald Trump for violating the rights of the migrant caravan heading towards the border.

The lawsuit, which was filed by Mike Donovan, alleged that Trump’s vow to send the migrants back to their country of origin violates the Fifth Amendment that states, “no person … shall be compelled in any criminal case to be a witness against himself, nor be deprived of life, liberty, or property, without due process of law.” (RELATED:Report: There Are Four Migrant Caravans Headed For The US Border)

“Let me just correct you as a non-lawyer. They do not possess those rights if they are in another country and not U.S. citizens. If they possess those rights, then, I don’t know, the entire country of Nigeria — pick a country that is poorer than the United States and say ‘we want to come there,’ president says you can’t come and all of a sudden eight hundred million people sue you for violating their constitutional rights for a country they’ve never been to?” Carlson responded before being cut off.

The lawsuit refers to Trump as the plaintiff’s own president: “The issue of detaining people in tents indefinitely brings about more unconstitutional conduct by our president.” 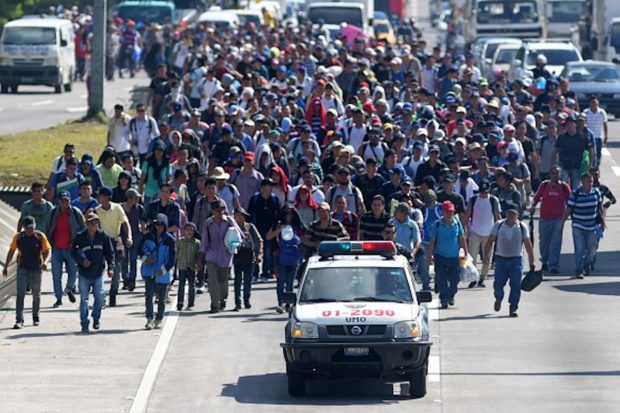 TOPSHOT – Salvadoran migrants embark on a journey in caravan to the United States, in San Salvador on October 31, 2018. (MARVIN RECINOS/AFP/Getty Images)

“With all due respect, Tucker, that’s not what we are talking about. We’re talking about individual migrants who are coming together who are on their way to the border to exercise their rights under U.S. law under due process,” Donovan continued before Carlson interrupted him.

“Hold on. Because it’s a few? What’s the principal if you are a foreigner residing in a foreign country — I don’t know if they are en route or not,” Carlson retaliated.

Trump announced a plan to sign a new executive order that would force asylum seekers to go toward legal ports of entry and to end the policy of catch and release on Thursday. 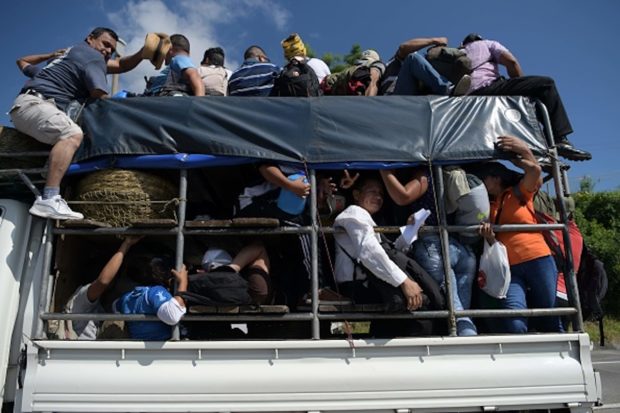 Salvadoran migrants embark on a journey in caravan to the United States, in San Salvador on October 31, 2018. (MARVIN RECINOS/AFP/Getty Images)

Donovan added, “If the entire nation of Nigeria were en route to the United States, perhaps it would be apples to apples. But that’s what you said. It’s not correct. These are individuals coming to this country to seek asylum.”

“First of all, you don’t know that. We don’t know what their intent is. Actually, you don’t. They are hundreds of miles away, and asylum claims have to be made on U.S. soil,” Carlson said. “Either at an embassy, consulate, or at our border. That’s a law, as someone who purportedly defends the law, you know that, I know. You can’t actually claim that you are covered by the U.S.Constitutionn. You are not on U.S. soil and you are not a U.S. citizen.”