Former Attorney General Jeff Sessions defended his rocky tenure atop the U.S. Department of Justice in his resignation letter to President Donald Trump Wednesday, writing that he and his aides effectively implemented the administration’s law and order agenda.

Trump announced Sessions’s firing by tweet Wednesday afternoon, heaving one final insult on a cabinet underlying he had come to loathe.

At your request I am submitting my resignation.

Since the day I was honored to be sworn in as Attorney General of the United States, I came to work at the Department of Justice every day determined to do my duty and serve my country. I have done so to the best of my ability, working to support the fundamental legal processes that are the foundation of justice.

The team we assembled embraced your directive to be a law and order Department of Justice. We prosecuted the largest number of violent offenders and firearm defendants in our country’s history. We took on transnational gangs that are bringing violence and death across our borders and protected national security. We did our part to restore immigration enforcement. We targeted the opioid epidemic by prosecuting doctors, pharmacists, and anyone else who contributes to this crisis with new law enforcement tools and determination. And we have seen results. After two years of rising violent crime and homicides prior to this administration, those trends have reversed—thanks to the hard work of our prosecutors and law enforcement around the country.

I am particularly grateful to the fabulous men and women in law enforcement all over this country with whom I have served. I have had no greater honor than to serve alongside them. As I have said many times, they have my thanks and I will always have their backs.

Most importantly, in my time as Attorney General we have restored and upheld the rule of law—a glorious tradition that each of us has a responsibility to safeguard. We have operated with integrity and have lawfully and aggressively advanced the policy agenda of this administration.

I have been honored to serve as Attorney General and have worked to implement the law enforcement agenda based on the rule of law that formed a central part of your campaign for the Presidency.

Thank you for the opportunity, Mr. President. 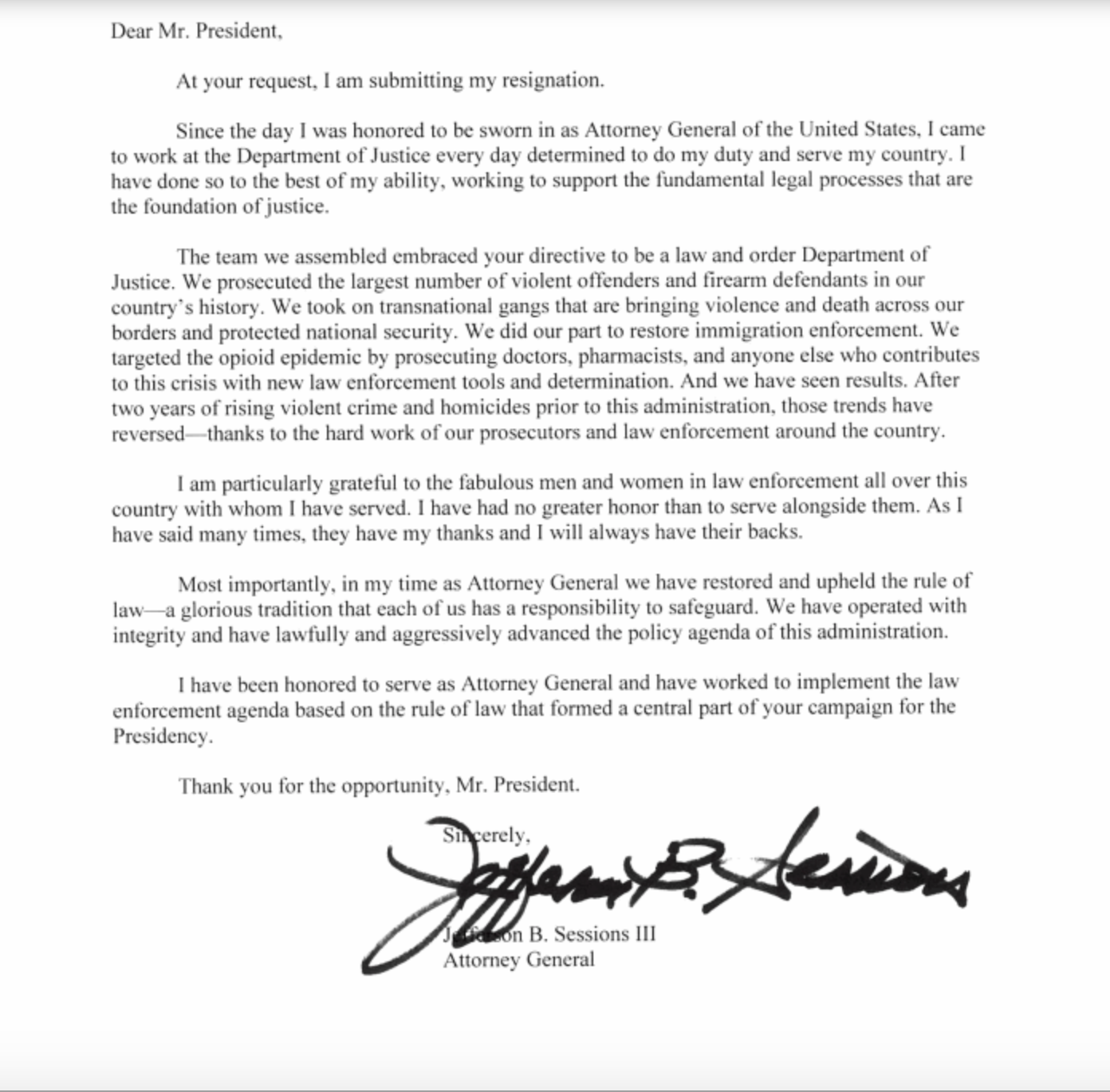 Sessions was a prosecutor before entering politics, serving as U.S. attorney in southern Alabama and later as state attorney general for some 20 years before his election to the Senate. His law and order conservatism corresponded neatly with Trump, who inveighed against transnational gangs facilitating the domestic drug trade during the campaign and has elsewhere endorsed aggressive policing tactics. (RELATED: Jeff Sessions Boasts Of Untold Civil Rights Successes)

As attorney general, Sessions assembled task forces to pursue and destroy MS-13 and steadfastly defended the administration against federal trial judges who enjoined Trump initiatives like the travel ban and rescission of the Deferred Action for Childhood Arrivals (DACA) program.

But their ideological sympathies were unable to bridge the chasm opened by Sessions’s decision to recuse himself from special counsel Robert Mueller’s investigation of Russian interference in the 2016 presidential election, which has left the president and his family exposed to potential legal liability. Longtime Trump loyalists like Michael Cohen have become ensnared in the probe, now hanging over an embattled White House.

The president’s displeasure was so extreme that he reportedly discussed terminating Sessions with the AG’s own staff. Sessions aide Matthew Whitaker will serve as the acting attorney general pending confirmation of a successor.