South Carolina Republican Sen. Lindsey Graham accused the media of being allied with the Democratic Party after a tense press conference with President Donald Trump on Wednesday.

Trump got into spats with several reporters during the post-midterm presser — most notably CNN’s Jim Acosta — and ignited a debate about whether or not the press corps is acting appropriately at White House events. Several reporters interrupted the president and their fellow reporters, becoming especially combative in exchanges with the president.

Graham fired off a series of tweets arguing that the behavior of the press diminishes their trust in the eyes of the American people. 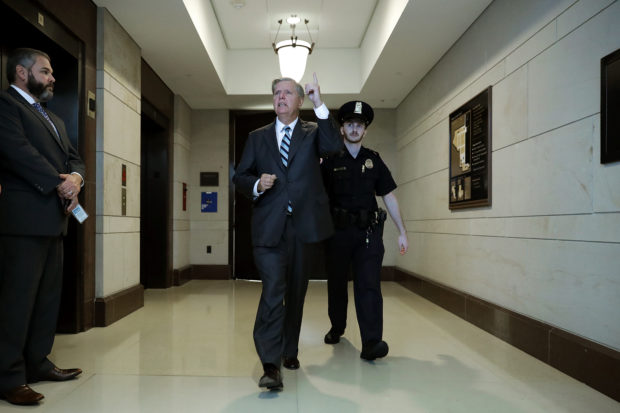 “It’s apparent to me the White House press corps lives in a bubble, and the way they are conducting themselves today will do NOTHING to improve their standing with the American people,” Graham tweeted.

It’s apparent to me the White House press corps lives in a bubble and the way they are conducting themselves today will do NOTHING to improve their standing with the American people.

Graham also rejected the president’s use of the phrase “enemy of the people” to describe the press, instead dubbing them the “Allies of the Democratic Party.”

The mainstream press are not — in my opinion – ‘Enemies of the People’ but rather ‘Allies of the Democratic Party’ playing an activist role in support of their agenda.

Trump labeled CNN’s Acosta an “enemy of the people” at Wednesday’s press conference.

1
Trump Announces Creation Of New National Monument –– Here's What It Is
US
2
Couple Faces Assault Charges After Video Of Woman Pointing A Gun At Black Family Goes Viral
US
3
Trump Defied The Polls In 2016, And The 2020 Polls Are Almost Identical. Here's What That Could Mean
Analysis
4
CNN Reporter Robbed At Knifepoint During Live Segment
Media
5
Ted Cruz To Introduce Legislation Holding City Officials Accountable For Injuries From Rioting
Politics