President Donald Trump and the first lady visited the Supreme Court Thursday for the investiture of Justice Brett Kavanaugh.

Kavanaugh, who was confirmed on Oct. 8, has been participating in the work of the court for almost a month. By tradition, a ceremonial courtroom installation with various dignitaries follows the confirmation of a new justice.

The ceremony also placed Senate Majority Leader Mitch McConnell and Judge Merrick Garland in the same room. Many of Kavanaugh’s former colleagues on the U.S. Court of Appeals for the D.C. Circuit were seated with Garland.

Before joining his new colleagues, Kavanaugh sat in the well of the court in a late federal style mahogany chair former Chief Justice John Marshall used on the bench. Marshall, who served from 1801 to 1835, is widely regarded as the most consequential justice in the Supreme Court’s history. Historians advise that the chair was bequeathed to the court in 1936, having been maintained by various private owners in the intervening years. The chair has been used in the investiture ceremony of each new justice since 1972.

Scott Harris, the clerk of the court, read Kavanaugh’s commission aloud. Kavanaugh then ascended the bench where Chief Justice John Roberts administered the oath of office. Thereafter, Kavanaugh assumed his seat at the far right edge of the bench, stopping to greet Justices Samuel Alito and Elena Kagan, who smiled broadly. Roberts wished Kavanaugh a “long and happy career in our common calling.” (RELATED: Supreme Court Will Decided If Cross-Shaped War Memorial Will Stand)

Prior to the brief courtroom ceremony, the president met privately with the justices in their private conference room. 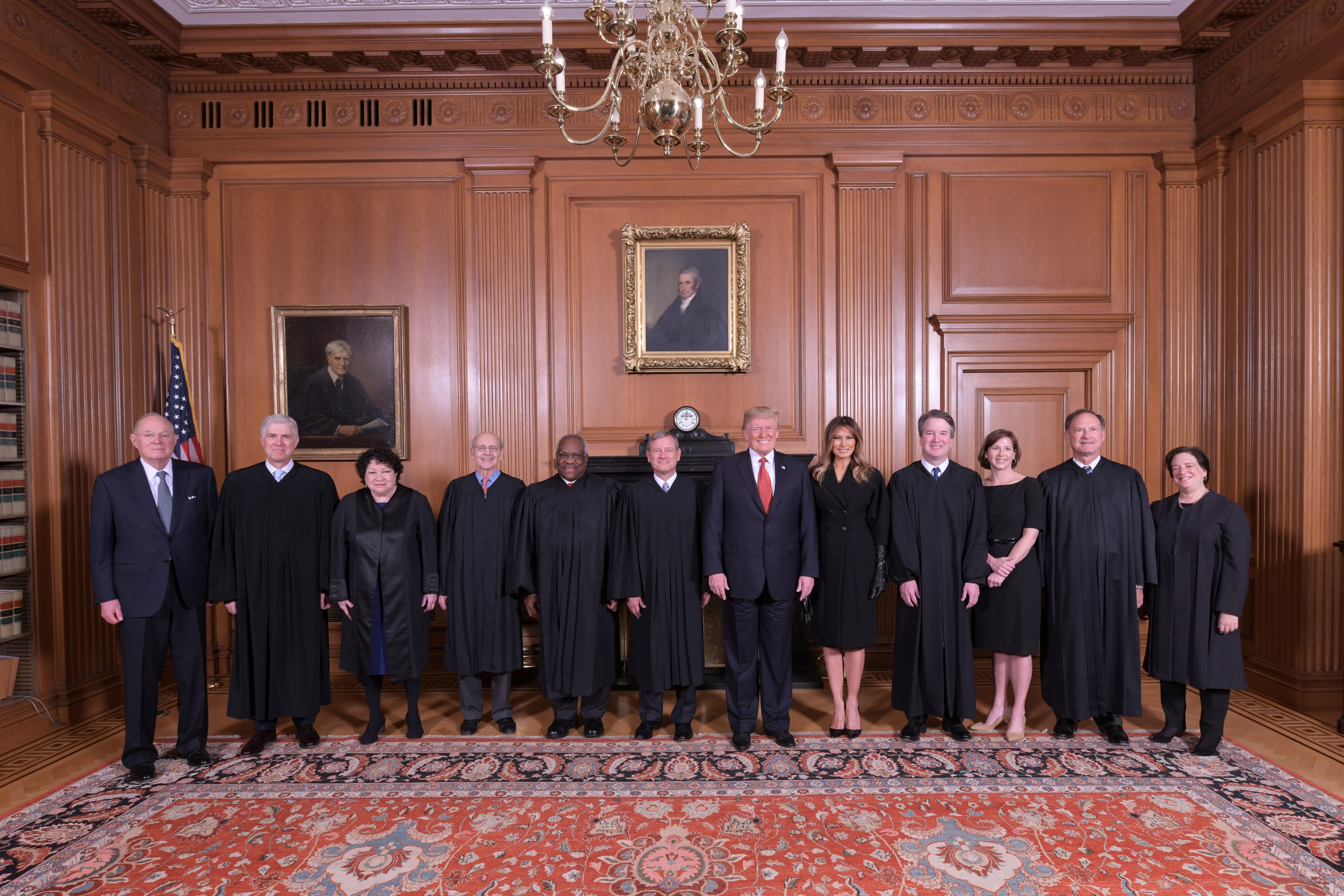 The president and first lady with Associate Justice Brett M. Kavanaugh and his wife, Mrs. Ashley Kavanaugh, and the other members of the Supreme Court in the Justices’ Conference Room at a courtesy visit prior to the investiture ceremony. Fred Schilling, Collection of the Supreme Court of the United States

The chief justice and the new associate justice generally appear in the court’s marble plaza after the investiture for a photo spray. The court elected to forgo this appearance, however, citing security concerns.

Justice Ruth Bader Ginsburg was precluded from attending, after she fell in her chambers and broke three ribs on Wednesday night.