A gunmen opened fire at a southern California bar Wednesday night, killing at least 12 and leaving at least a dozen others injured.

A Ventura County sheriff’s deputy is among the dead, police say, as well as the suspected shooter, who has recently been identified as Ian Long, 28, according to NBC News.

A man, reportedly dressed in a black hooded sweatshirt, entered Borderline Bar and Grill in Thousand Oaks Wednesday night carrying a semi-automatic pistol and opened fire around 11:20 p.m. at a crowd of mostly college students participating in the bar’s “country night.”

President Donald Trump has been “fully briefed” on the situation, and tweeted Thursday morning, thanking the victims and law enforcement for their bravery.

I have been fully briefed on the terrible shooting in California. Law Enforcement and First Responders, together with the FBI, are on scene. 13 people, at this time, have been reported dead. Likewise, the shooter is dead, along with the first police officer to enter the bar….

“It’s a horrific scene in there, there is blood everywhere and the suspect is part of that, and I didn’t want to get that close and disturb the scene and possibly disturb the investigation,” Dean told CNN.

Dean told reporters at a press conference that the shooter is a veteran of the U.S. Marine Corps., and authorities have not ruled out that he could have been suffering from PTSD.

Sgt. Ron Helus, a 29-year law enforcement veteran, was one of the first law enforcement officers on the scene. He was shot and died early Thursday morning in the hospital, according to the Ventura County Sheriff’s Department.

Dean, choking back tears, said Helus undoubtedly saved lives by being the first to confront the gunman.

“He died a hero because he went, he went in to save lives, to save other people’s lives,” Dean said.

Helus leaves behind a wife and son, whom he called before entering the bar.

Witnesses told ABC News that after the gunman fired several shots, he tossed what appeared to be smoke bombs around the bar and began shooting again.

A promoter for the bar, 21-year-old Taylor von Molt, also said in an interview with CNN that she thought the gunfire sound was just balloons popping.

“[…] it’s a country bar so we were line dancing … and I heard what I thought was a balloon pop,” von Molt said.

“I was confused because we didn’t have any balloons at the time … I turned around and saw him fire his weapon a couple of times and I ran to the nearest exit and tripped and fell on the way,” she added.

Police told the Los Angeles Times that at least 30 shots were fired. 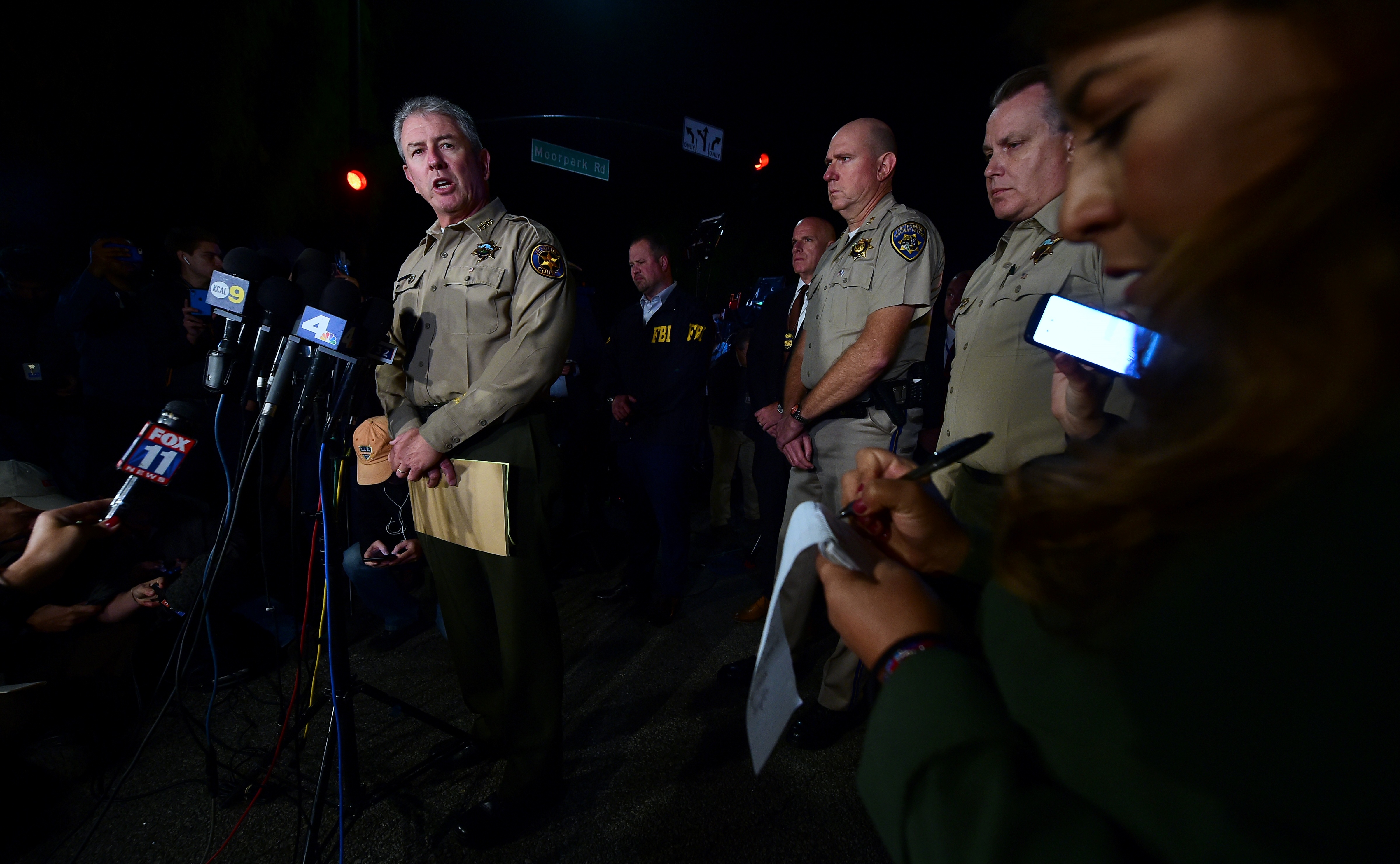 Ventura County Sheriff Geoff Dean briefs reporters at the intersection of US 101 freeway and the Moorpark Rad exit as police vehicles close off the area responding to a shooting at a bar in Thousand Oaks, California on November 8, 2018. – Twelve people, including a police sergeant, were shot dead in a shooting at a nighttclub close to Los Angeles, police said Thursday. All the victims were killed inside the bar in the suburb of Thousand Oaks late on Wednesday, including the officer who had been called to the scene, Sheriff Geoff Dean told reporters. The gunman was also dead at the scene, Dean added. The bar was hosting a college country music night. (Photo by Frederic J. BROWN / AFP)

The Ventura County sheriff said authorities are unsure of a motive, but said there are no links to terrorism.

An additional 18 victims were injured, but not shot, while trying to flee the scene are being treated at area hospitals, according to Ventura County Fire Department Capt. Stan Ziegler.

Many of the victims inside the bar were young students at nearby schools, including California Lutheran University and Pepperdine University.

A few are already calling for action on gun control, and Democratic Rep. Jim Himes of Connecticut, where the deadly shooting at Sandy Hook Elementary School in 2012 took place, said on CNN Thursday morning that these shootings have become a “weekly thing.”

“I’m embarrassed to say … my first thought was, ‘here we go again, it’s this week’s mass shooting,’ and that’s a really hard way to think about this. I contrast where we are today with how we all felt about Sandy Hook,” Himes said.

“This is a weekly thing [and] even though it’s become a weekly thing, nobody does anything, especially the Congress where I work,” the congressman added.

This is a developing story, and more updates will be provided.