President Donald Trump will nominate Neomi Rao, administrator of the Office of Information and Regulatory Affairs (OIRA), for a seat on the U.S. Court of Appeals for the D.C. Circuit.

Speaking at the White House’s Diwali celebration Tuesday, the president said he was slated to make the announcement on Wednesday, but was so delighted by the event he spontaneously decided to reveal Rao’s pending nomination. Diwali is a Hindu religious festival and Rao is Indian-American.

“I just nominated Neomi to be on the D.C. Circuit Court of Appeals, the seat of Justice Brett Kavanaugh,” Trump said. “We were going to announce that tomorrow, then I said, ‘You know, here we are, Neomi, we’re never going to do better than this right?'”

“Thank you very much, Mr. President, for the confidence you’ve shown in me,” Rao replied. “I greatly appreciate it.”

Rao, the daughter of Indian immigrants, has served as the Trump administration’s deregulatory czar since 2017, and is widely considered a leading authority on agency law. Before re-entering the White House, she founded and led the Center for the Study of the Administrative State at George Mason University’s Antonin Scalia Law School, increasingly a bastion of conservative jurisprudence. 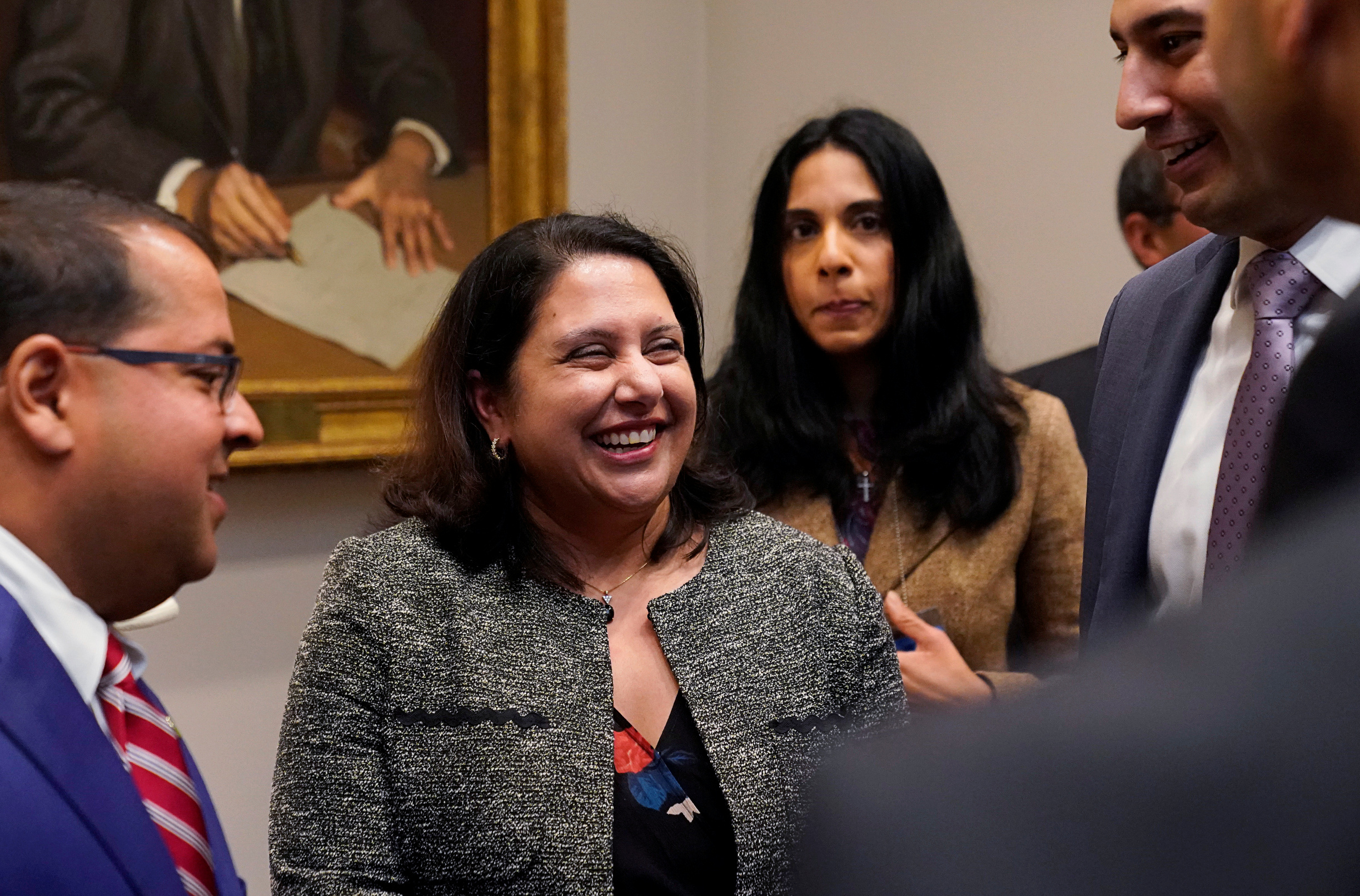 Neomi Rao (C), the administrator of the White House Office of Information and Regulatory Affairs, reacts after U.S. President Donald Trump announced that he is nominating her to replace Supreme Court Justice Brett Kavanaugh on the U.S. D.C. Circuit Court of Appeals during a Diwali ceremony at the White House in Washington, U.S. November 13, 2018. REUTERS/Jonathan Ernst

The Center seeks to advance and curate debates over the scope of federal regulatory authority, increasingly a priority for conservative legal scholars and activists who fear agency power has grown such that the regulatory bureaucracy is now its own unaccountable branch of government. (RELATED: Justice Ginsburg Is On The Mend After A Nasty Fall)

Rao has led the Trump administration to meaningful successes in its vaunted regulatory rollback. She crowed about the administration’s achievements in a Washington Post op-ed on Oct. 21.

“The benefits of deregulation are felt far and wide, from lower consumer prices to more jobs and, in the long run, improvements to quality of life from access to innovative products and services,” Rao wrote. “Eliminating unnecessary and duplicative red tape has helped the Trump administration achieve the lowest unemployment rates in nearly 50 years and dramatic economic growth for our country.”

Conservative legal commentators praised Trump’s pick, as they did when Rao was first named OIRA administrator.

“Ms. Rao’s extensive experience in the field of administrative law will be an asset on the D.C. Circuit, which reviews on appeal the majority of litigation involving the various federal agencies,” said Carrie Severino, chief counsel of the conservative Judicial Crisis Network. “Ms. Rao is also the seventh of President Trump’s court of appeals nominees to have clerked for Justice Clarence Thomas. I look forward to seeing her confirmed.”