Cardinal Blase Cupich asserted Tuesday that some cases of clergy sex offenses involved consensual adult sex, despite the objective difference of authority between priests and seminarians.

Cupich told the Tuesday meeting of the U.S. Conference of Catholic Bishops that offenses involving consensual adult sex and adult pornography should be handled differently than those involving child sexual abuse. The cardinal also criticized a proposed system of reporting abuse allegations against Bishops as unnecessary, despite the U.S. church’s recent failures to hold bishops accountable for covering up sex abuse allegations. (RELATED: Pope Says ‘Gossipers Are Terrorists,’ Remains Silent On Accusations Of Cover-Up)

“Because in some of the cases with adults … involving clerics, it could be consensual sex, anonymous, but also involve adult pornography,” Cupich said, according to LifeSite News. “There’s a whole different set of circumstances that need to come into play here.”

Cupich: “In some of the cases with adults involving clerics, it could be consensual sex … there’s a whole different set of circumstances.” pic.twitter.com/wEkxSY2nc7

The claim that sexual acts performed between adult seminarians and clergy, as in the case of former Cardinal Theodore McCarrick, were consensual is questionable at best, given the legal definition of sexual harassment and the inherent power dynamic between people in different positions of church hierarchy.

“Whenever one partner has power over the other at work, the relationship is inherently unequal, and any sexual relations can be seen as nonconsensual,” said The Spiggle Law Firm. “But under sexual harassment law, the focus isn’t so much on typical consent as it is whether advances made by the supervisor were ‘welcome’ by the employee.” 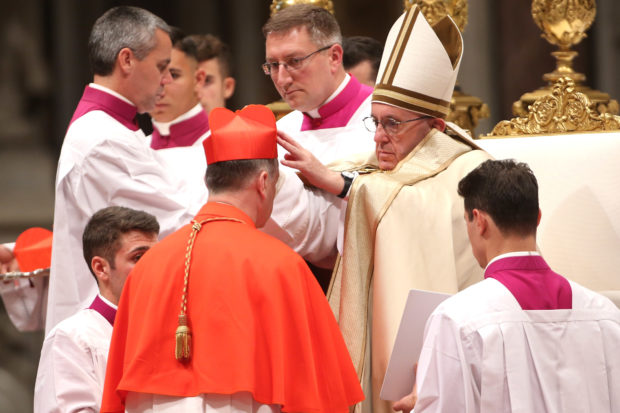 VATICAN CITY, VATICAN – NOVEMBER 19: Pope Francis appoints new cardinal Archbishop of Chicago Blase J. Cupich during the Ordinary Public Consistory at St. Peter’s Basilica on November 19, 2016 in Vatican City, Vatican. Thirteen of the new Cardinals will be under 80 years and will be eligible to vote in a conclave. (Photo by Franco Origlia/Getty Images)

As for handling bishops’ sex offenses, Cupich argued that those matters should be handled within the church instead of allowing for a lay commission to investigate claims.

“It seems to me that we are separating this function away from … the life of the church, as a separate entity, when in fact we already have a system,” Cupich said, according to National Catholic Reporter. “I’m wondering if we’re going to get into a mentality … of seeing this as something that we’re outsourcing, rather than taking responsibility for ourselves as pastors in terms of complaints.”

Detroit Archbishop Allen Vigneron presented the concept for the lay-led reporting system, which would be called the “Special Commission for Review of Complaints Against Bishops for Violations of the Standards of Episcopal Conduct.”

Under the proposed system, if the lay commission determined that a complaint involved abuse against a minor, they would report that complaint to law enforcement. Under the U.S. Catholic church’s current resolutions concerning sexual abuse, known as the Dallas Charter, consequences are defined only for priests who commit abuse, but no such consequences are outlined for bishops who commit or fail to report abuse.

That system has come under heavy criticism as revelations have surfaced showing that bishops in dioceses around the nation systematically failed to report allegations and in some cases protected priests accused of sexual abuse.