“It’s a movement of people, thousands of people, around 5,000 have already arrived to Tijuana and the border with San Diego, Tucker. But it’s not a national emergency and it’s not a threat to the national security of the United States. Most of the people that are part of this caravan are just pushing strollers through Mexico. They are families, women, [and] babies just trying to get to the U.S. to legally request asylum, something that President Trump is making much, much harder,” Acevedo stated.

Carlson responded, “I just want to get to the practical part of this. So we were told by anchors across the spectrum on television that the caravan was a thousand miles away. They were walking. It would be weeks before they got to our border. I wake up this morning and there they are, how’d that happen? Did they run or did someone pay buses to take them up here? And you didn’t tell us that part.”

“It took them almost a month or over a month to get from Honduras to the U.S., Mexico border. Not all of them have arrived, some of them them are still trying to get to this point, Tucker. And yeah, some of them were able to catch a ride and get on a bus, on trailers, on the back of trucks that were carrying chickens and pigs,” Acevedo fired back. (RELATED: Filmmaker Ami Horowitz Embedded Himself In The Migrant Caravan) 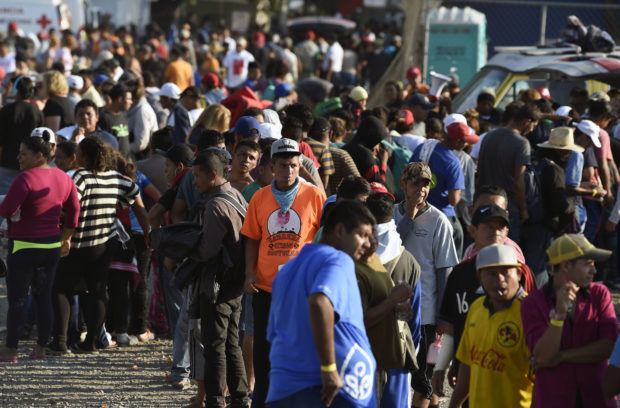 Central American migrants, taking part in a caravan heading to the US, queue to receive a meal at a temporary shelter in Irapuato, Guanajuato state, Mexico on November 11, 2018. (ALFREDO ESTRELLA/AFP/Getty Images)

“I haven’t seen anyone chartering buses to bring them to the border. I’ve seen Mexican officials, for example, here in Tijuana providing transportation from this point in the border,” Acevedo added. “I am happy to share the footage with Fox News, the footage from our correspondent who traveled with them in the back of a bus that usually carries chickens.”

“What I’m saying is what you’re engaging in is propaganda designed to convince people to think something that is not true. So I think we both know the majority of people, including the people on the tape moving from Honduras and Guatemala, are men, young men, without their wives and children, right? Or are you not going to admit that?” Carlson shot back.