CNN’s Chris Cuomo on Friday had co-worker Don Lemon on to discuss George Conway’s recent remarks about the White House in light of his marriage to White House counselor Kellyanne Conway.

“I’m watching this thing and you know it’s like, the administration is like a shit show in a dumpster fire,” Conway said in a Friday Yahoo News podcast interview.

After playing the George Conway interview portion, Cuomo brought in Lemon for his opinion.

“I don’t really care,” he added. “I just think that it’s all the theater of the absurd, and I just think if it matters that much, I don’t understand why they’re even together. Look, that’s just what I’m saying.”

“This is not politics, Chris,” Lemon said after Cuomo stated that people can disagree on politics. “I keep telling you this is not politics. This is about right versus wrong. Lying versus telling the truth. He’s basically saying every time he trolls the White House is that what you’re saying is absurd and ridiculous. You’re lying to the American people. And his wife is the person who comes out. She is the spokesperson.” (RELATED: Black Leadership Group: CNN Must Put ‘Own House In Order’ After Don Lemon Said White Men Are US’s Biggest Terror Threat)

“You just made my point for me,” said Lemon. 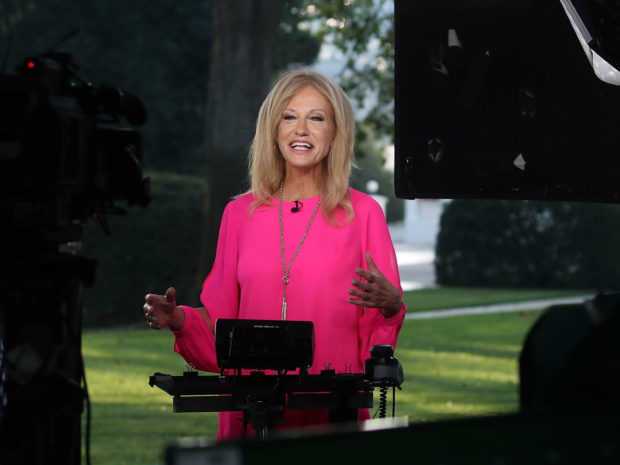 WASHINGTON, DC – AUGUST 17: White House Counsel, Kellyanne Conway appears on a morning television show, from the North Lawn of the White House on August 17, 2018 in Washington, DC. According to recent reports, Conway’s husband, George Conway, are at possible odds over his criticism of US President Trump. (Photo by Mark Wilson/Getty Images)

The two CNN hosts lightly sparred over the Conway’s marriage in light of their political differences, with Cuomo stating that George Conway should “respect the relationship.”

“If we disagree on fundamental things, Chris, we would probably not,” said Lemon. “We could have a difference of opinions on things, but if you disagreement on the fundamentals, what is right, what is wrong, what is true, what is false, what is reality versus what’s not reality, what is a fact versus an alternative fact. If you disagree on those things, I can’t even be friends with someone like that.”