“No, it’s not under consideration,” Trump told reporters when asked about a report that the White House is seeking the extradition of Fethullah Gulen, a political foe of Erdogan who lives under exile in Pennsylvania.

Erdogan has accused Gulen, his former ally and a U.S. green card holder, of orchestrating the July 15, 2016 coup attempt in the Turkish capital, Ankara, and Istanbul that left more than 250 people dead.

NBC News reported on Thursday that the White House had instructed the Justice Department and FBI to explore ways to legally extradite Gulen, who has lived in the U.S. since 1999.

NBC’s sources claimed that the extradition was intended to appease both the Turkish and Saudi governments. The Turks have long pressed U.S. officials for Gulen’s extradition. His removal would appease Erdogan, who has railed against the Saudi government over the Oct. 2 murder of Saudi journalist Jamal Khashoggi at the Saudi embassy in Istanbul. (RELATED: Report: White House Looking To Extradite Fethullah Gulen To Repair Turkey-Saudi Relations)

The Justice Department and White House pushed back on the report Friday, saying that extradition is not being considered.

“Whatever we can do for Turkey, and frankly countries that we get along with very well. We’re having a very good moment with Turkey,” he told reporters, according to a White House pool report. 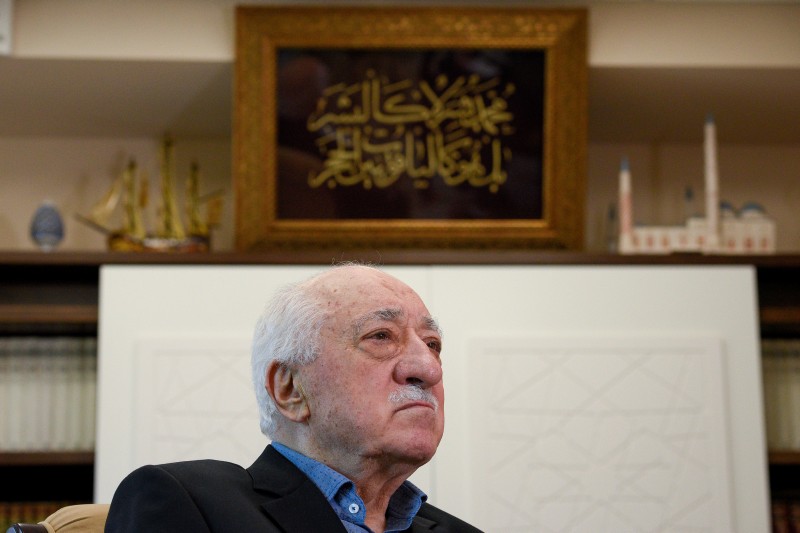 He mention the recent release of Andrew Brunson, the American pastor who was jailed for more than two years in Turkey on bogus terror-related charges. Erdogan said in several speeches that Brunson was being held as a bargaining chip to force the U.S. to extradite Gulen.

“The U.S. should look at the steps it has taken and comply with the extradition treaty if it wants American pastor Brunson,” Erdogan said in an interview in April.

Brunson’s imprisonment and Gulen’s status in the U.S. has led to growing tensions between Ankara and Washington during the Trump administration. But Trump said Saturday that relations between the two NATO allies has improved of late.

“I get along very well with the president, he’s a friend of mine. He’s a strong man, he’s tough man, and he’s a smart man,” said Trump.