Two longtime political operatives and associates of President Donald Trump are offering conflicting accounts about what they both knew during the 2016 campaign about WikiLeaks and the group’s plans to release the emails of Clinton campaign chairman John Podesta.

Jerome Corsi wrote in his upcoming book, “Silent No More,” that he made three key allegations in his testimony before special counsel Robert Mueller’s grand jury that could pose legal problems for Roger Stone, a longtime Trump confidant. Corsi claims:

Stone disputes all three scenarios, telling The Daily Caller News Foundation that Corsi is mistaken at best or lying at worst. He’s provided TheDCNF with text messages and emails that he says provide context showing that Corsi’s testimony is “illogical” and “inaccurate.” (RELATED: EXCLUSIVE: Jerome Corsi Has Defense Agreement With Trump, Immunity Agreement With Mueller)

For his part, Corsi has insisted in interviews this week that his claims about Stone are the truth.

Three emails are key to the first Corsi allegation. The emails are also referenced in draft court filings that Mueller submitted to Corsi during negotiations over a plea deal. Prosecutors wanted the former InfoWars reporter to plead guilty to making false statements about topics discussed in the emails. But Corsi says he is rejecting the offer, claiming he did not intentionally lie to prosecutors.

Corsi wrote Stone from Italy on Aug. 2, 2016: “Word is friend in embassy plans 2 more dumps. One shortly after I’m back. 2nd in Oct. Impact planned to be very damaging.”

The embassy friend is a reference to WikiLeaks founder Julian Assange, who is living under asylum in the Ecuadorian Embassy in London.

“Time to let more than Podesta to be exposed as in bed w/ enemy if they are not ready to drop HRC,” he said. “That appears to be the game hackers are now about.” 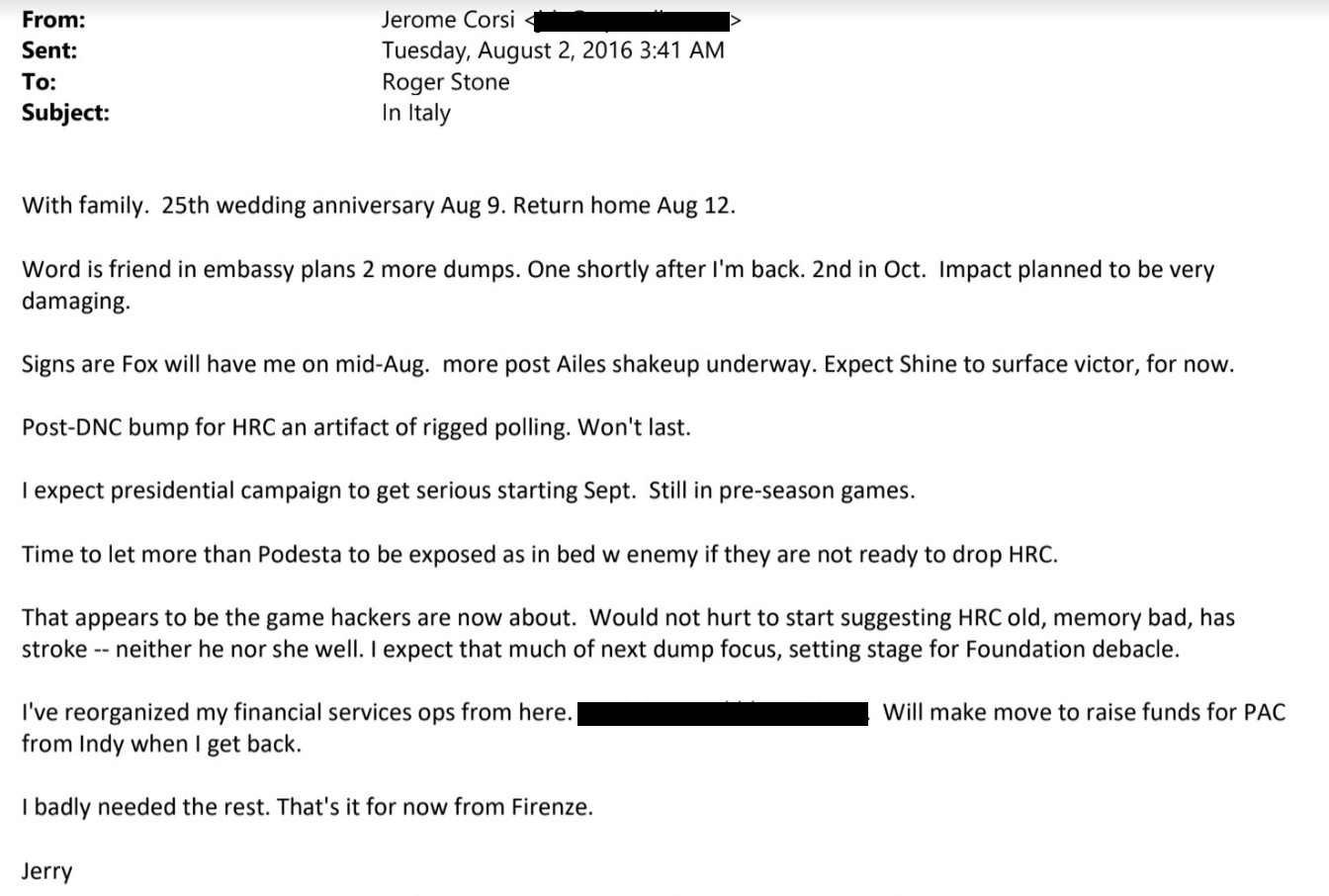 Pictured is an email from Jerome Corsi to Roger Stone on Aug. 2, 2016. (Photo courtesy of Roger Stone)

Prosecutors claim that the email shows that Corsi told Stone that WikiLeaks had Podesta’s emails.

But Stone disputes that interpretation.

“I had no idea that Podesta’s emails had been stolen until they were published,” Stone told TheDCNF. “It makes a reference to Podesta, but even that’s not a veiled reference to his emails.”

Stone denies having any other conversations with Corsi about WikiLeaks having Podesta emails. Corsi, 72, claims that nobody told him that WikiLeaks had the emails. He insists that he came up with a theory on his own.

Stone also notes that six days after the email, he gave a speech in front of a group of Florida Republicans in which he speculated about what WikiLeaks might release.

“I actually have communicated with Assange. I believe the next tranche of his documents pertain to the Clinton Foundation but there’s no telling what the October surprise may be,” Stone said in an Aug. 8, 2016 speech.

Stone asserts that if he’d have picked up on Corsi’s claim that WikiLeaks had Podesta emails, he would have said it during the speech rather than refer to the Clinton Foundation.

Stone’s belief that WikiLeaks had dirt on the Clinton Foundation came via an email he received on July 25, 2016.

Hours after receiving the email, Stone reached out to Corsi asking him to “Get to Assange.”

“Get to Assange at Ecuadorian Embassy in London and get the pending WikiLeaks emails … they deal with Foundation, allegedly,” he said.

Corsi then contacted Ted Malloch, a London-based academic, urging him to reach out to Assange.

Stone provided The Daily Caller with a copy of that email to show that he also suggested that Malloch attempt to make contact with Independent Vermont Sen. Bernie Sanders’ brother, who had spoken out against former presidential candidate Hillary Clinton. He also suggested that Malloch track down a woman who went to school at Oxford with former President Bill Clinton.

Prosecutors appear to be investigating whether Stone’s now-infamous tweet is linked to Corsi’s claims about WikiLeaks and Podesta.

Corsi’s testimony that he helped Stone craft a cover story undercuts testimony that Stone submitted on Nov. 13, 2017 to the House Permanent Select Committee on Intelligence.

Stone claimed that his tweet was based on articles he had read about the Podesta brothers’ business activities, as well as his conversations with Corsi about the same topic. Stone said he asked Corsi to write a memo of research on the Podestas. He produced the memo on Aug. 31, 2016.

“I knew this was a cover-story, in effect not true, since I recalled telling Stone earlier in August that Assange had Podesta emails that he planned to drop as the ‘October Surprise,’ calculated by Assange to deliver a knock-out blow to Hillary Clinton’s presidential aspirations,” Corsi wrote in “Silent No More.”

Corsi also revealed that he received limited immunity from prosecutors to discuss his role in crafting the memo.

Stone makes two other arguments in his defense. He pointed to tweets in which he expressed interest in the Podesta brothers’ lobbying activities. He asserted that he had no need in the aftermath of his tweet to come up with a cover story.

Stone has claimed that he was investigating the Podesta brothers following a New York Times report about the Ukraine lobbying activities of former Trump campaign chairman Paul Manafort.

Stone shared tweets he sent from Aug. 15, 2016 in which he complained about the lack of coverage of the Podestas’ own Ukrainian business activities. Manafort has since been convicted on charges related to his Ukraine work, and the Podesta Group was forced to retroactively register as a foreign agent of Ukraine.

“@JohnPodesta makes @PaulManafort look like St. Thomas Aquinas. Where is the @NewYork Times?” he tweeted on Aug. 15, 2016.

The allegation that could have the most serious consequences for Stone is Corsi’s claim about the “Access Hollywood” tape, which The Washington Post published on Oct. 7, 2016, just minutes before WikiLeaks began releasing Podesta’s emails.

In “Silent No More,” Corsi wrote that Mueller prosecutor Aaron Zelinsky told his attorney, David Gray, that Stone had told him “in advance about the Billy Bush video and asked me to get word to Assange to hold the release of the first batch of the Podesta emails until after the Washington Post had published the damaging Billy Bush ‘hot mic’ recording.”

In the recording, from 2005, Trump is heard bragging that women allow him to grab them by the genitals.

Corsi affirmed Zelinsky’s claim to Gray, writing: “That is exactly what happened.”

Stone said he is befuddled by Corsi’s claim.

“It’s utterly bizarre,” said Stone. “It’s like they’ve induced him to say this, because it doesn’t even come close.”

Stone has two main arguments pushing back on Corsi’s claim.

He contends that Corsi sent a text message and published tweets that showed that he had no contact with WikiLeaks and no insight into what documents the group would release.

Corsi himself wrote in his book that he did not believe that Stone believed he had a link to Assange or WikiLeaks.

Stone was also receiving updates about WikiLeaks’ plans from Randy Credico, a left-wing comedian who claimed to be close friends with a lawyer for WikiLeaks.

“Jerry’s already demonstrated that he has no connection to Assange. Why would I go to him to tell him to tell Assange to do x, y and z?” Stone told TheDCNF. “If I went to anybody, I would have gone to Credico. But since I didn’t know this was coming, there was nothing to go to Credico about.” (RELATED: Here’s Everything We Know About Roger Stone, Randy Credico And WikiLeaks)

Credico told Stone on Aug. 27 that “Julian Assange has kryptonite on Hillary.” He also asked Stone not to reveal him as a source for information about WikiLeaks.

Corsi’s text messages and tweets also suggest he had no inside track on WikiLeaks efforts.

“Assange made a fool of himself,” Corsi wrote in an Oct. 4, 2016 text message that Stone provided to TheDCNF.

“Has nothing or he would have released it. Total BS hype,” he said.

Assange did reveal during that press conference that WikiLeaks would start releasing some campaign-related documents later that week on a weekly basis.

Trump supporters have argued that Assange did not require a heads up from Trump’s world to know that releasing Podesta’s emails after the publication of the tape would be beneficial to Trump.

Corsi also published two tweets that suggest he did not know what information WikiLeaks had.

“If Assange has the goods on Hillary, he ought just to drop the goods,” Corsi tweeted on Oct. 2, 2016. “Otherwise, he’s going to make a fool of himself.” (RELATED: Jerome Corsi Reveals Why He Is In Mueller’s Crosshairs)

“So Assange made a fool of Himself,” Corsi tweeted on Oct. 4, 2016. “Had zero, or he would have released it. Will take grassroots on Internet to get truth out & beat Hillary.”

Stone’s tweets during the week of the release match up closely with what Credico was texting him.

Stone tweeted the next day: “Wednesday@HillaryClinton is done. #WikiLeaks.” 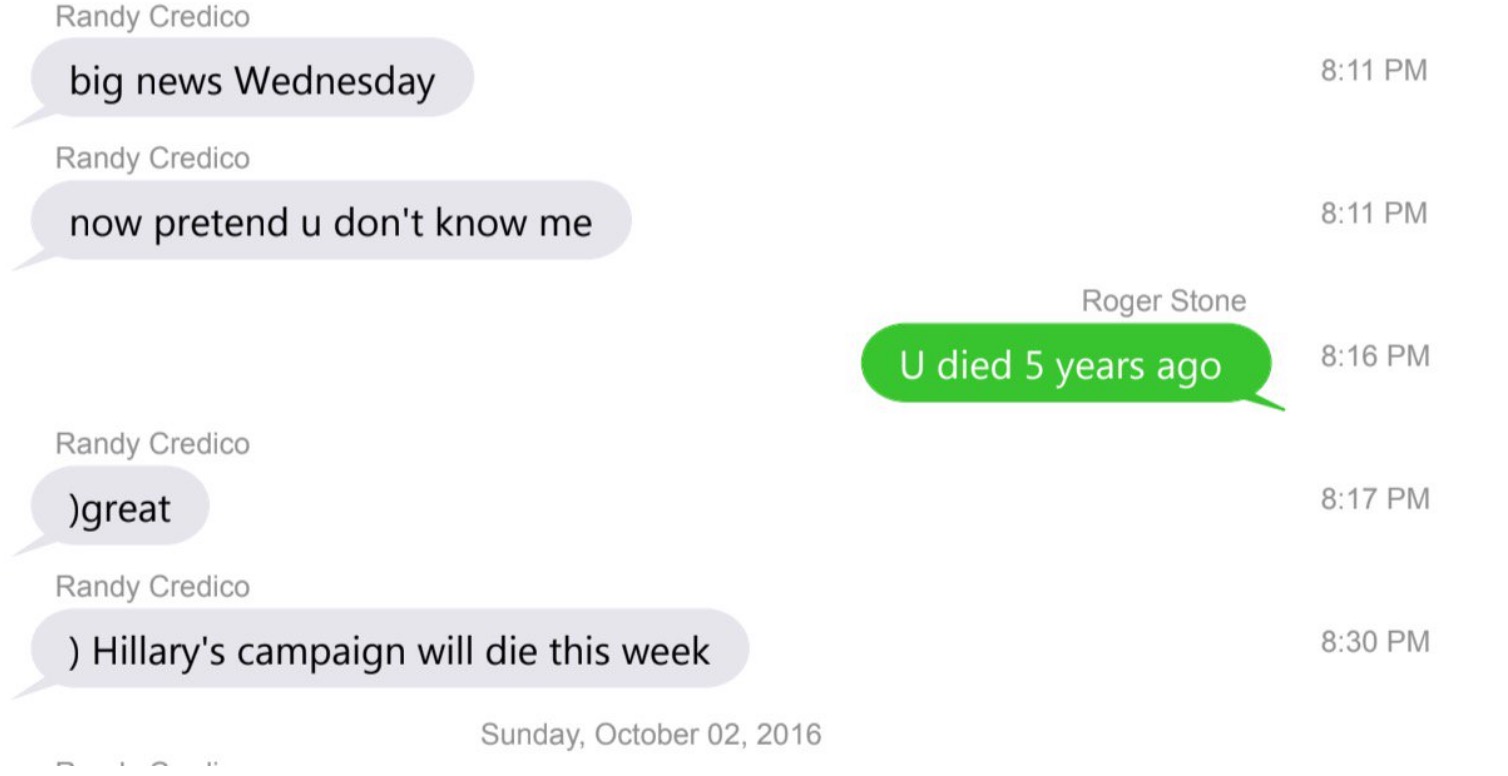 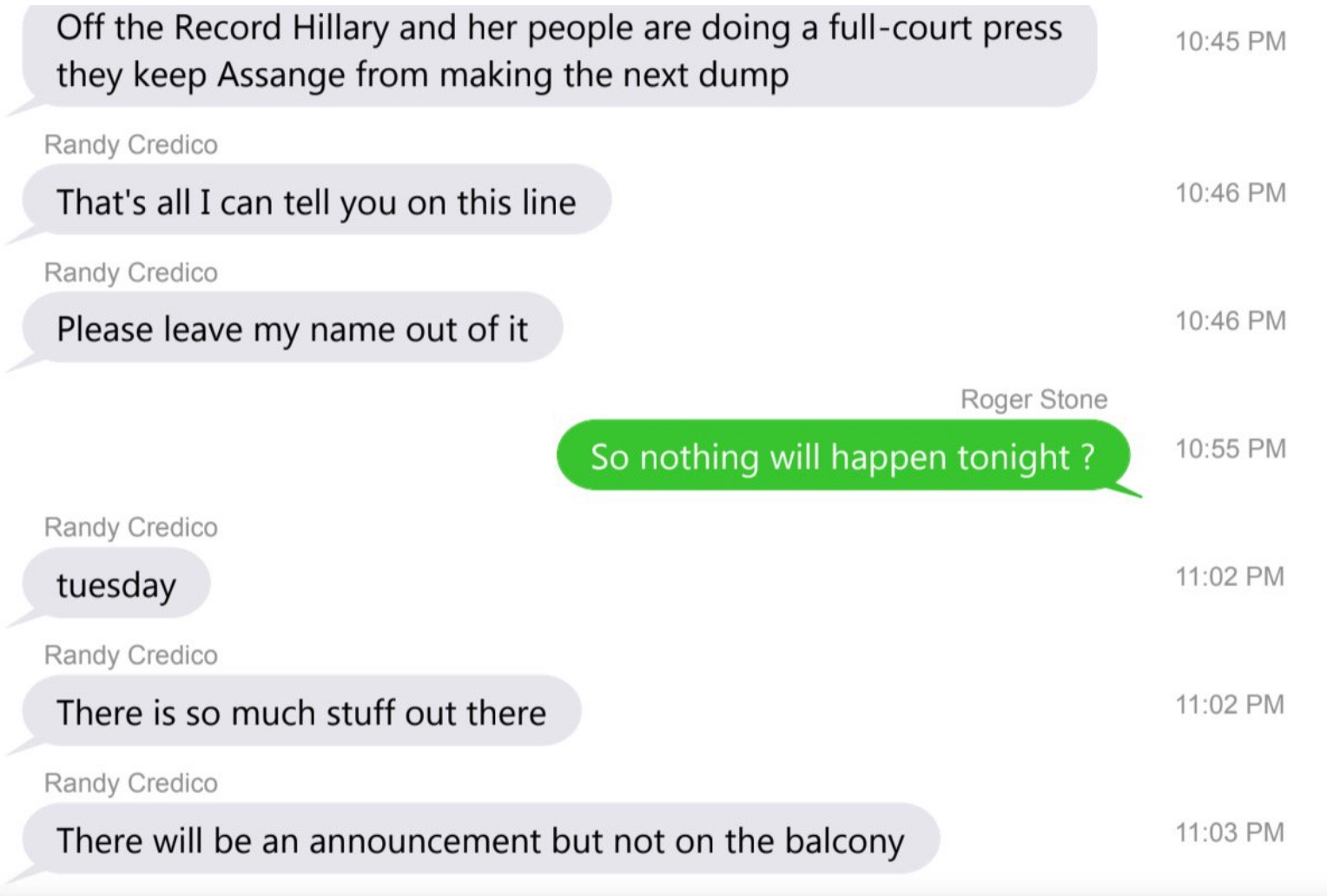 Stone also claims that an email he sent to Steve Bannon, then the chairman of Trump’s campaign, on Oct. 4 was based on Credico’s comments.

“What was that this morning???” Bannon wrote to Stone.

“Fear. Serious security concern. He thinks they are going to kill him and the London police are standing down,” Stone said, adding: “However — a load every week going forward.”

Stone says his comments about security concerns reflect what Credico had told him.

“[W]ait 12 hours,” Credico told Stone on Oct. 3, 2016, after Stone asked why Assange had cancelled a press conference. “One thing you fail to understand and that is Hillary is a scary serious and dangerous person who will kill without conscience the same way Luca Brasi did.”

Stone claims that Credico’s assurances during phone conversations were the basis for his tweets expressing confidence that WikiLeaks would still release information on the Clinton campaign despite Assange’s lackluster press conference.

“Julian Assange will deliver a devastating expose on Hillary at a time of his choosing. I stand by my prediction,” Stone tweeted on Oct. 6.