The day after a picture posted by Bush spokesman Jim McGrath of Sully lying in front of his master’s casket went viral on social media, Graham posted an article to Slate titled, “Don’t Spend Your Emotional Energy on Sully H.W. Bush.” It even helpfully included the subheader: “He’s a service dog who had been with the president for six months, not his lifelong companion.”

Graham began her piece by comparing Sully to his human namesake, the pilot – Chesley “Sully” Sullenberger – who famously landed his troubled airplane in the Hudson River in 2009.

“Almost 10 years later, a dog named for the pilot has become a beloved ‘hero’ in his own right, and he did it for something much simpler: lying down.” (RELATED: Slate Claims Trump Doesn’t Use Computers — Prove Themselves Wrong With Just One Tweet) 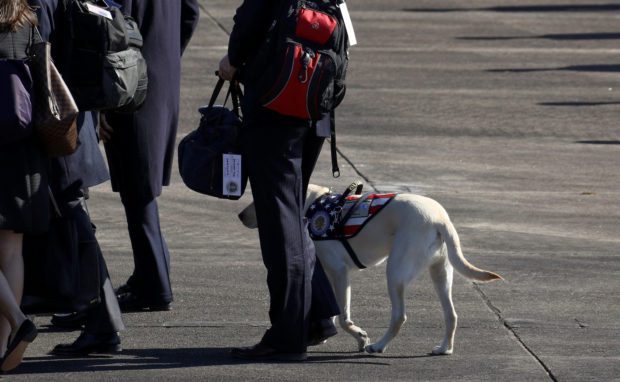 After detailing the various ways Sully became a media sensation over the past 24 hours, the Slate writer excused “sentimentality” on the part of pet owners … apparently except for those – like Sully – who weren’t with their masters long enough to suit her fancy.

“But Sully is not a longtime Bush family pet, letting go of the only master he has known,” wrote Graham. “He is an employee who served for less than six months.”

She then turned the fact that Sully is a trained service dog that will move on to help other vets into a reason why people who find the picture of the dog laying in front of Bush’s casket touching are “demented.”

Because, you know, some dogs eat dead people.

It’s wonderful for Bush that he had a trained service animal like Sully available to him in his last months. It’s a good thing that the dog is moving on to another gig where he can be helpful to other people (rather than becoming another Bush family pet). But it’s a bit demented to project soul-wrenching grief onto a dog’s decision to lay down in front of a casket. Is Sully “heroic” for learning to obey the human beings who taught him to perform certain tasks? Does the photo say anything special about this dog’s particular loyalty or judgment, or is he just … there? Also, if dogs are subject to praise for obeying their masters, what do we do about the pets who eat their owners’ dead (or even just passed-out) bodies?

The photograph, in other words, is not proof that Sully is a particularly “good boy” or that “we don’t deserve dogs,” as countless swooning tweets put it on Monday. On its own, it says almost nothing other than the fact that Sully was, at one point in the same room as the casket of his former boss. This is simply a photograph of a dog doing something dogs love to do: Lie down. The frenzy around it captures something humans love to do, too: Project our own emotional needs onto animals.

Sully the service dog remained loyally by President George H.W. Bush’s side until the very end, and this is what @Slate decided to write????? ????https://t.co/YKdyBX8MIL

“Don’t Spend Your Emotional Energy on Sully H.W. Bush”@slate word vomit assembler @publicroad must be a blast at parties

I’m glad she’s around to get us plebs know that Sully isn’t 658 in dog years.

“That dog is NOT cute or loyal”

is not the hill you want to die on