Speaking with CNN’s Jake Tapper on Sunday morning’s edition of “State of the Union,” Baker related how what seemed at first like a “bounce-back” day for the often ill former president turned into his last, and how the two talked about “going to heaven” on that final day.

“Well, it was actually a pretty sweet day, Jake,” said Baker, responding to Tapper’s question about Bush’s final day. “He had been failing for a little while.”

Baker described how Bush Sr. had been “in and out of the hospital many times” the last several years because of his Parkinson’s disease. (RELATED: Here’s A Look Back At George H.W. Bush’s Life In Pictures)

“He would go into the hospital, they would cure him and he would come out,” said the former secretary of state. “There was a lot of that. But it never really affected his spirit. In fact, he said after Barbara died that he wasn’t ready to go. He used to kid about wanting to live to be 100.”

He then told Tapper about Bush’s last day, a “very, very gentle and peaceful passing for him.” 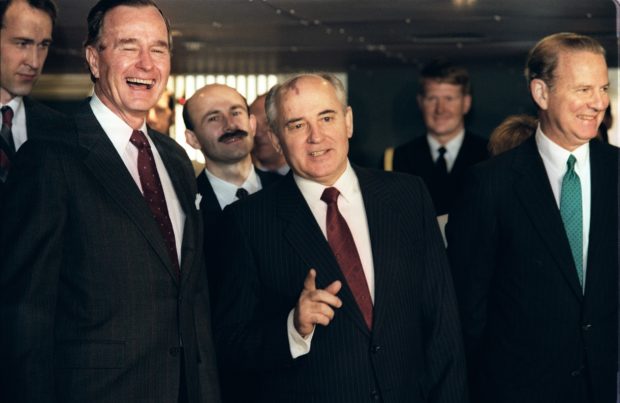 US President George Bush (L) laughs 02 December 1989 in Valletta as the General Secretary of the Communist Party of the Soviet Union Mikhail Gorbachev (C) gestures while US Secretary of State James Baker (R) smiles to the press during the first US-Soviet summit meeting. This summit is viewed as the official end of the Cold War. (JONATHAN UTZ/AFP/Getty Images)

“He had not gotten out of bed for three or four days,” Baker said. “I live close by his home here in Houston, and I went over there at 7:15 on Friday morning, expecting to see him sleeping, but he was alert, more alert than he had been in four or five days. And I sat there and had a wonderful two-hour visit, just the two of us. He ate a big breakfast, ate three eggs, yogurt, two fruit drinks and everything. He hadn’t been eating much. And we all began to think well here we are, he’s going to surprise us again. It’s another bounce-back day.”

Things began to decline quickly for former president, however, and he “passed away at 10:10” that night, Baker said before telling Tapper about the last conversation between the two.

“When I showed up at 7:00 in the morning, one of the aides who assisted him physically said, ‘Mr. President, Secretary Baker’s here.’ He opened both eyes, looked at me and said ‘hey, Bake, where are we going today?’ And I said, ‘Well, Jefe [Spanish for Chief], we’re going to heaven.’ He said, ‘good, that’s where I want to go.’ Little did I know or did he know, of course, that by 10:00 that night he’d be in heaven.”