Representatives of the protesters were scheduled to meet with French Prime Minister Edouard Philippe Tuesday, but backed out of the talks over “security reasons.” Fellow “yellow vests,” named after the bright yellow traffic vests they wear, had warned the representatives against a deal over the proposed gas tax hike the sparked the protests, DW reports. (RELATED: Taxes, Taxes and Taxes’: Paris Suffers Worst Riot In A Decade As Anti-Macron Protests Roil France)

French President Emmanuel Macron has held firm on his policies throughout the protests but may be backing off soon. Philippe’s office said favorable “measures” for the yellow vests are coming and Culture Minister Franck Riester promised “a strong conciliatory gesture in the coming days,” according to DW.

Protesters have grown more agitated at the French government’s seeming unwillingness to yield to any of the protesters’ demands. The yellow vests have called for lower taxes, expanded social programs and other reforms. Protesters have also called for new elections and Macron’s resignation.

“Their response has poisoned the situation even more,” a French protester told The New York Times.

“The citizens have asked for lower taxes, and they’re saying, ‘Ecology,'” the protester said, referencing a speech during which Macron outlined plans to transition France from fossil fuel to renewable energy.

Riots, property damage and clashes with police have concentrated in Paris. The death toll due to the protests grew to four over the weekend. Three have died after their vehicles hit roadblocks set up by the yellow vests. One 80-year-old lady died after a tear gas canister hit her face as she was trying to close her window to the protests outside, NPR reports. 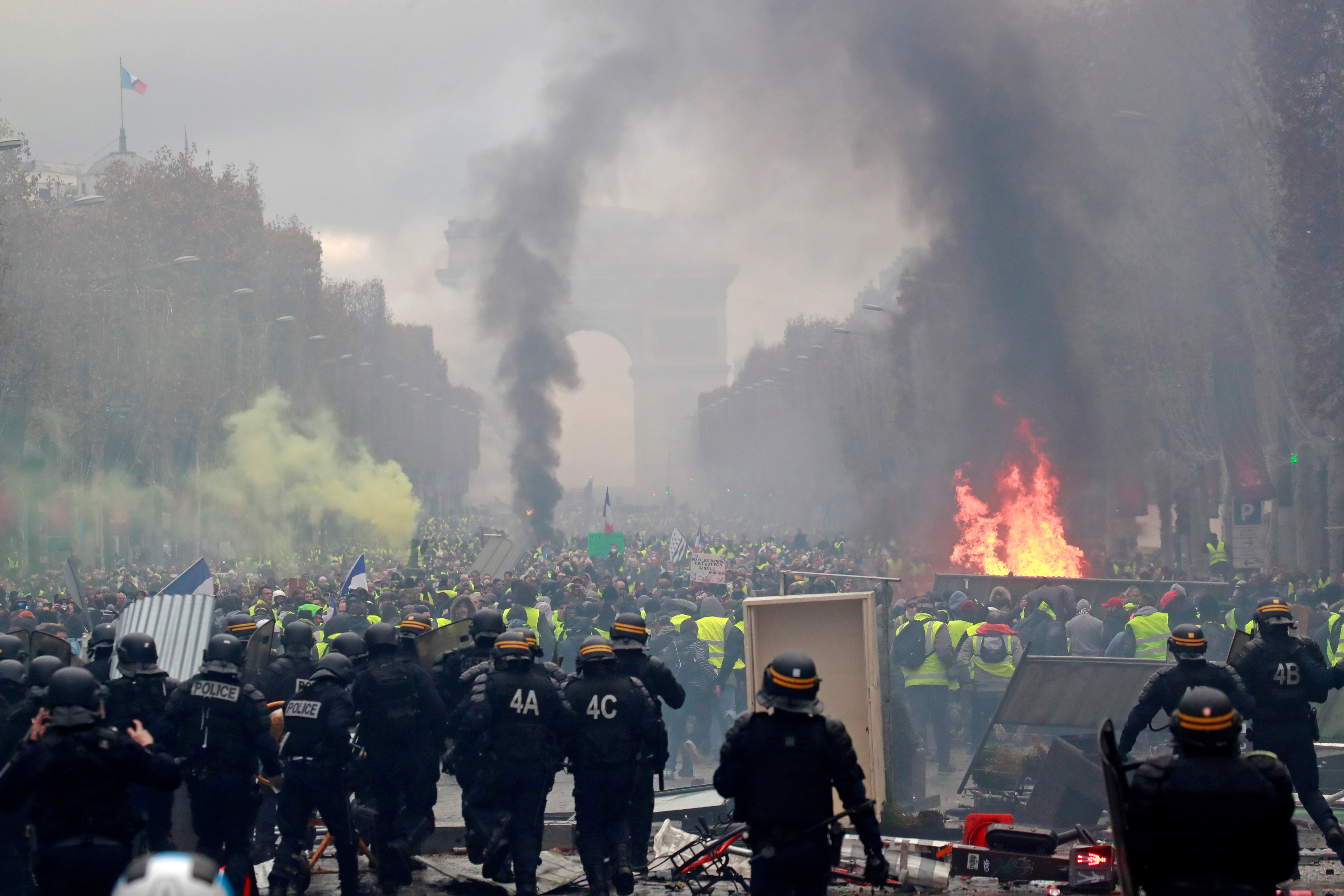 Protesters wearing yellow vests, a symbol of a French drivers’ protest against higher fuel prices, run from police during riots on the Champs-Elysees in Paris, France, November 24, 2018. REUTERS/Gonzalo Fuentes

“(Violence) has nothing to do with the peaceful expression of a legitimate anger” and “no cause justifies” attacks on police, Macron said Saturday in Buenos Aires, according to the Associated Press.

The protests have lasted for more than two weeks and show no signs of waning. In mid-November, hundreds of thousands of French middle-class citizens marched in protests and blocked streets and highways across France. Macron had recently proposed a new hike in the gas tax hike on top of a January hike that increased gas prices 7.6 cents per liter, or nearly 30 cents per gallon.

“We live with stress,” Frenchman Fabrice Girardin, a former carpet-layer, told TheNYT. “Every month, at the end of the month, we say, ‘Will there be enough to eat?'”