Kid Rock paid off the layaway balances of 350 Walmart customers in Nashville ahead of Christmas.

“Kudos to Kid Rock for making such a gesture in our community,” said Meyer. “I think that’s a pretty Nashville proud moment.” 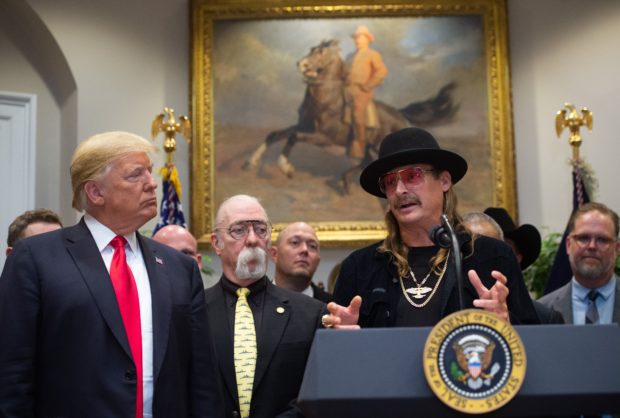 US President Donald Trump shakes hands with musician Kid Rock (R) after signing the Hatch-Goodlatte Music Modernization Act, a bipartisan bill aimed at ensuring artists who released records prior to 1972 are paid royalties from digital services, in the Roosevelt Room of the White House in Washington, DC, October 11, 2018. (Photo by SAUL LOEB / AFP)

The musician posted a tweet Friday saying he was inspired by movie director Tyler Perry, who paid over $400,000 worth of layaway tabs at two Atlanta area Walmart stores on Thursday. (RELATED: Kid Rock Points To White House Media, Tells Them Exactly What He Thinks Of Their Trump Coverage)

@tylerperry Great idea! I followed your lead and paid off the layaway at my local Walmart in Nashville. Merry Christmas and God Bless You!

Meyer said Kid Rock called the store on Friday morning, explaining that he wanted to spread some good cheer by paying down the balances. Kid Rock’s manager later came into the store to make the big payment.

It was a shocking, cool moment for Meyer, he said. And it has been an awesome experience letting customers know their accounts have been paid off. The items on lawaway are likely Christmas gifts since the store only offers the program during the holiday season, Meyer said.

The layaway customers, who have been coming into the store as a result of Kid Rock’s gesture, are wearing shocked and smiling faces, Meyer said. Each one is being handed a card explaining that Kid Rock made the payment on their behalf, he said.

“Merry Christmas from your neighbor!” the cards read.

Walmart tweeted its thanks to both Kid Rock and Tyler Perry.

Kid Rock was reportedly removed as the Nashville Christmas Parade’s grand marshal after controversial comments he made on “Fox & Friends” about political correctness and Joy Behar.

“I think the president’s doing a great job with his policies,” said the musician. “I wish, you know, I heard you earlier in a bumper asking people what was their biggest concern, and mine would be just, you know, the division in the country right now. It’s so hard for people just to get past that we can disagree and still be cordial with one another, you know, and just talk about things without going for each other’s throats and protesting everything and — God forbid you say something a little bit wrong — you’re racist, homophobic, Islamophobic. This, that and the other. People need to calm down, get a little less politically correct. And I would say, you know, love everybody. Except I’d say screw that Joy Behar bitch. Everybody but that.”

1
'Mommy And Daddy' Escort 'Antifa Kid' Suspected Of Kicking Off Riot To Turn Himself In
US
2
Florida Sheriff Cautions Rioters, Says He Encourages Citizens To Defend Their Homes With Guns
US
3
Tucker Carlson Rips Jared Kushner: Trump's Instincts 'Have Been Subverted At Every Level'
Media
4
UFC Superstar Stops Rioters In Awesome Video
Editorial
5
President Trump Walks Out Of White House, Holds Up Bible In Front of St. John's Church Amid Protests
Politics