The failure of carbon tax proposals to catch on in the U.S. — and around the world — is prompting environmentalists to give up hope of ever implementing it.

Carbon fees were once considered an obvious next step in the country’s multifaceted effort to reduce CO2 emissions. Congresswoman-elect Alexandria Ocasio-Cortez, a rising star on the left, believes a carbon tax can be one part of her sweeping “Green New Deal.” Some conservatives have signed on to the idea, believing it to be a market-based approach to eliminating pollution. Even a number of major energy companies have come forward in support of charging businesses for the amount of carbon they release into the atmosphere.

Initiative 1631, for example, was supposed to serve as a bellwether for how similar legislation could fare across the country. The bill — which called for a $15 fee on each metric ton of carbon emissions — was put to the test in Washington state during the 2018 midterm elections. Despite the state’s Democratic lean and the governor’s public backing, the measure was soundly rejected in November. It was the second time voters in the state had rejected a carbon fee.

Such a proposal being rejected in a blue state doesn’t bode well for activists who hope to see it implemented nationwide.

“If it can’t pass in Washington state right now, I’m not sure that says that there’s much of a pathway at this moment nationally,” Oregon Democratic Sen. Jeff Merkley said of the outcome.

Events across the Atlantic have only worsened prospects for carbon tax supporters. 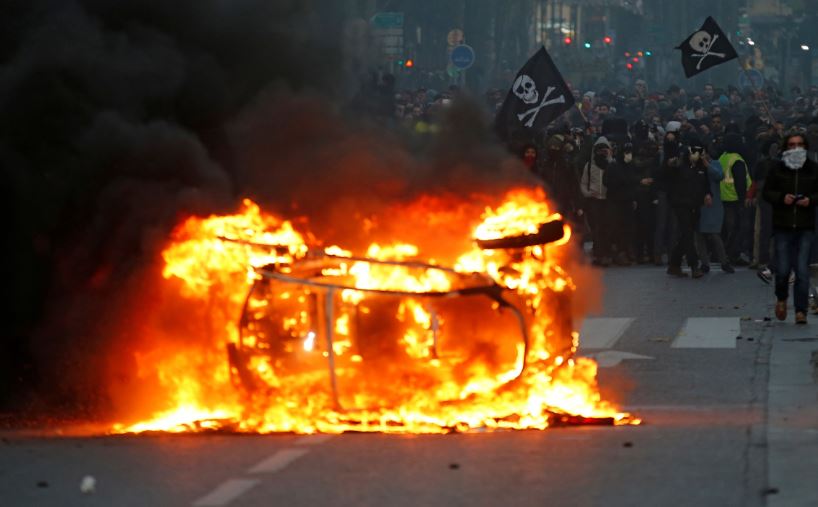 A car burns during during clashes with police at a demonstration of the “yellow vests” movement in Marseille, France, December 8, 2018. REUTERS/Jean-Paul Pelissier

In the face of unprecedented protests, the French government has decided to suspend a planned gas tax. President Emmanuel Macron had originally proposed a slew of new carbon taxes intended to wean consumers off fossil fuels and transition to electric vehicles. The price hikes, however, triggered a wave of intense riots. The protests, which have lasted for weeks, have even become deadly. One man was caught on video over the weekend losing his hand to a grenade explosion.

“There’s been a predominant conversation in Washington, D.C., that’s been led by economists and politicos that have tried to frame a carbon tax as the only way,” Evan Weber, a national political director for the Sunrise Movement, said to Politico. “It’s proved time and time again to be not politically popular, and we haven’t even priced the policy at where economists say it needs to be. The idea that [a carbon fee is] the way out of this mess is something we need to be pushing back on.” (RELATED: Keep It In The Ground Activists Stormed Trump Administration’s Event At UN Meeting)

Activists will instead focus on other causes near and dear to the environmental movement, such as pushing energy standards that mandate a total transition to clean and renewable energy.

While many have expressed dissolution over the prospect of a carbon tax future, other green activists plan to keep charging forward with their own proposals. Supporters plan to introduce various carbon fee bills across state capitols in 2019, including Pennsylvania, New York, New Jersey, Maryland and New England.