Mike Brest Reporter
December 18, 2018 9:50 PM ET
Font Size:
It’s no secret that at least some Tijuana residents have criticized the migrant caravan — yet Tucker Carlson’s echoing of their exact same sentiments has led to a wide backlash among advertisers.
Following a vicious campaign from anti-First Amendment leftist organizations known for stifling dissenting opinion, at least 10 advertisers have opted not to place ads on the eponymous Tucker Carlson Tonight show.

These organizations cherry-picked quotes from Carlson’s monologue and sprinted to mischaracterize them.

5. Tucker doubling down on saying immigrants would make the country “dirtier.” Just replayed the clip.

There’s just one problem: He was talking about illegal immigrants in Tijuana — not immigrants in general — and local residents there share the opinion.

According to a Chicago Tribune article, Tijuana residents took to the streets to protest the caravan, accusing “the migrants of being messy, ungrateful and a danger to Tijuana. They also complained about how the caravan forced its way into Mexico, calling it an ‘invasion.'” (RELATED: Tijuana Official Provides Update On Spike In Crime)

The statements that led to organizations pulling their ads came during Carlson’s opening monologue on Thursday:

“It’s obvious that we need more scientists and skilled engineers, but that’s not what we’re getting. Instead, we’re getting waves of people with high school educations or less. Nice people. No one doubts that. But as an economic matter, this is insane. It’s indefensible, so nobody even tries to defend it. Instead, our leaders demand that you shut up and accept this. We have a moral obligation to admit the world’s poor they tell us, even if it makes our own country poorer, dirtier and more divided.”

Carlson then segued to the caravan that has settled in Tijuana, Mexico. He added:

“What’s so amusing though, is that nobody ever bothered to explain any of these rules to the people of Tijuana. Tijuana is in Mexico, which means they’re Mexican citizens. And by academic definitions popular in this country, they must be oppressed. Nobody on the American left ever imagined that the people of Tijuana would display the classic symptoms of white privilege. And yet when a caravan of Honduran immigrants showed up in their city uninvited that’s exactly what they did.”

He addressed the organizations that chose to pull their ads during his show on Monday night.

“They want us to mouth the empty platitudes and move on, nothing to see here, shut up and go away. Those who won’t shut up get silenced, you have seen it a million times, it happens all the time,” he began. “The enforcers scream ‘racist’ on Twitter until everybody gets intimidated and changes the subject to the Russia investigation or some other distraction. It’s a tactic, a well-worn one. Nobody thinks it’s real and it won’t work with this show, we are not intimidated. We plan to try and say what’s true until the last day.”

“The truth is, unregulated mass immigration has badly hurt this country’s natural landscape. Take a trip to our southwestern deserts if you don’t believe it. Thanks to illegal immigration, huge swaths of the region are covered with garbage and waste that degrade the soil and kill wildlife. The Arizona Department of Environment Quality estimates that each illegal border crosser leaves 6-8 pounds of trash during the journey into our country.”

His claims that immigrants make a country dirtier was not the first time he’s discussed the mess the caravan is making.

On Dec. 3, Carlson interviewed Genaro Lopez, a Tijuana official. During their discussion, Carlson interrupted Lopez and asked about a man who was sweeping trash out of the caravan’s campsite. 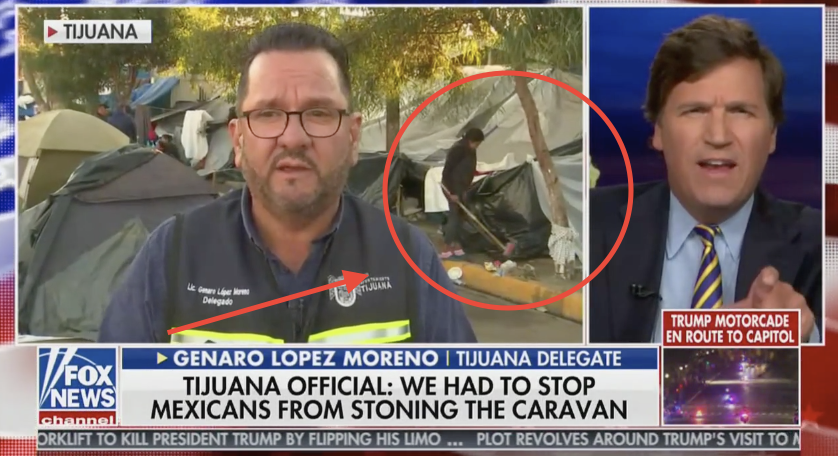 Lopez addressed the situation, saying, “There is a lot of trash because what I was trying to tell you, the 360 grew to 6,200 [migrants] and that’s when it got out of hand. So we got another facility, it’s a big concert hall where you can have like 10,000 people under a roof.”

Jordan Uhl, a self-described progressive activist, and Jeremy Barr, a reporter for The Hollywood Reporter, led the charge in driving the backlash against Carlson. Uhl both privately and publicly repeatedly tweeted at the organizations that advertise during Carlson’s show. Sleeping Giants also pushed for organizations to drop their deals with Carlson and Fox News, going as far as to write an open letter to them.

He went on to celebrate these organizations pulling their ads. “WOW! Did not expect this one! TD Ameritrade DROPS TUCKER!” Uhl tweeted.