Greenpeace and three other organization initiated a lawsuit Dec. 18 claiming France is not doing enough to tackle climate change. The organizations are giving the government two months to formulate a response, after which they will move forward with their lawsuit. The legal pursuit puts Macron in a bind.

The complaint comes less than a month after Macron dinged an unpopular gas tax that roiled activists associated with the so-called Yellow Vest movement. The anti-gas tax protest is a mix of left-wing and right-wing populist elements. One of the organizations leading the legal pursuit believes the protesters actually want a carbon tax.

“What they [yellow vests] want first and foremost is social justice and financial justice. And there will be no social justice without action for the climate,” In Our Common Interest President Marie Toussaint told reporters. Her group is one of the four non-government organizations seeking to sue France.

“Global warming feeds on inequalities and strengthens them. It strikes the most fragile first. It is destroying our economy and our territories. So, it can be a process that can be done in parallel,” Toussaint said. The best way to enact the carbon tax is to offset it with a subsidy for those who rely on transportation, she added. 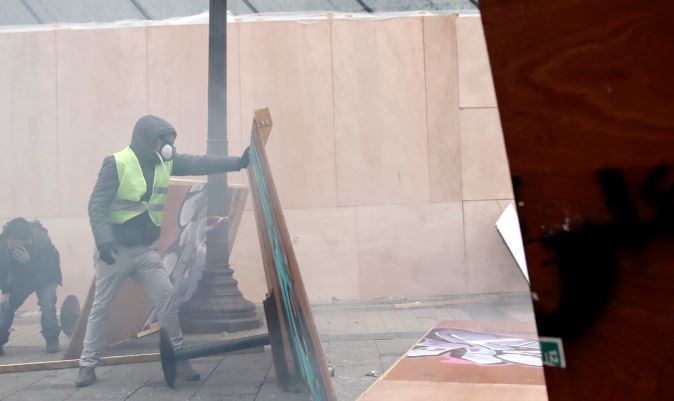 A protester wearing a yellow vest faces off with French riot police on the Champs-Elysees Avenue during clashes as part of a national day of protest by the “yellow vests” movement in Paris, France, December 8, 2018. REUTERS/Christian Hartmann

Macron, for his part, promised to become one of the world’s leading climate warriors.

“If we do nothing, our children will know a world of migrations, of wars, of shortage. A dangerous world,” he said in a June 2017 statement rebutting U.S. President Donald Trump’s decision to leave the Paris accord.

Polls have not been kind to Macron since enacting the taxes. Only 26 percent of French people say they have confidence in the embattled president, according to a poll from Kantar Public, which surveyed 1,000 people in October.

Many French citizens see the gas taxes as an example of Macron’s inability to understand the plight of the country’s working class. (RELATED: France Suspends Climate Tax Following Weeks Of Anti-Macron Protests)

The price of gas rose in January by 7.6 cents per liter in France and the price of diesel by 3.84 cents. To put that into perspective, 3.8 liters of fuel is equivalent to about 1 gallon of gasoline in the U.S. Europe is on the warpath against gas-powered vehicles.