When I learned last summer that the Student Free Press Association would be sponsoring my fall internship at The Daily Caller, I was waiting tables. Life had thrown me some curveballs, but at last, I was finishing my journalism degree online while I worked. I had spent the year before as a landscaper — spreading mulch, laying sod and planting trees in rural North Carolina.

It was, therefore, quite a shock to find myself in the nation’s capital during the past four months, hurled suddenly into some of the most tumultuous events in the city’s recent history. The news cycles were intense and relentless. Like Forrest Gump, I was an unwitting observer to much of it.

Reflecting on an unforgettable season of chaos and history, I am sobered by some of what I saw. Space allows only for what was my most memorable experience.

My first day in the newsroom coincided with the first day of Judge Brett Kavanaugh’s appearance before the Senate Judiciary Committee. Therefore, I took an unusually personal interest in following what became a national spectacle. What began as cordial, somewhat boring congressional hearings soon darkened into yet another black cloud in the gathering cultural storm. 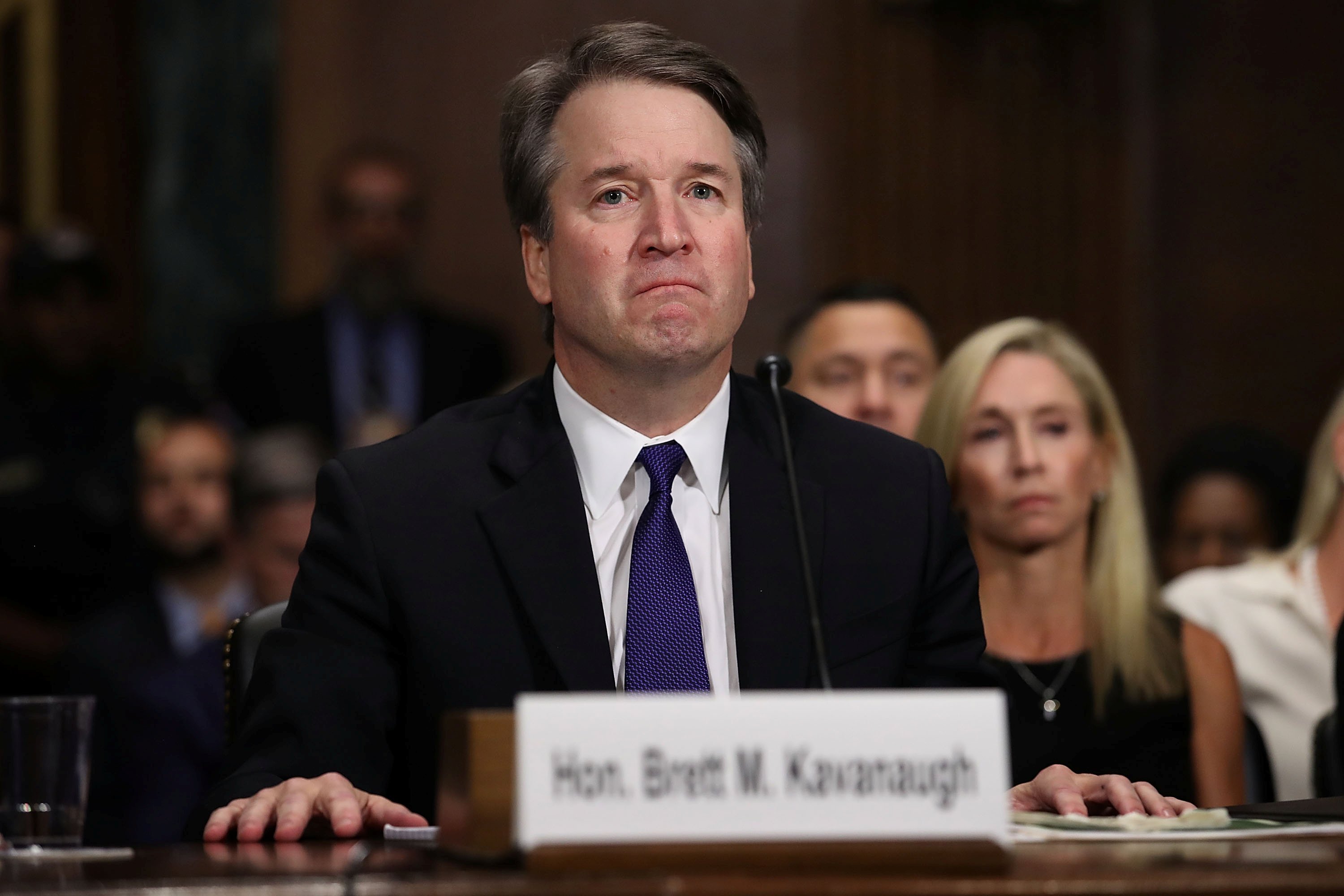 Brett Kavanaugh testifies before the Senate Judiciary Committee during his Supreme Court confirmation hearing in the Dirksen Senate Office Building on Capitol Hill. (Photo by Win McNamee/Pool via REUTERS)

TheDC’s White House correspondent is kind enough to bring every intern along with him on a trip to the White House, for which reason we were all given press credentials. I was never told to what extent that pass could give me access to other things. But on Oct. 6, the day of Kavanaugh’s Senate confirmation vote, I threw on my suit, walked down from my house to Capitol Hill and decided to find out.

I wanted to watch with my own eyes the conclusion to this national ordeal.

To my surprise, the police let me right in after a brief screening. I felt entirely out of place as I wandered into the sprawling Capitol, which somehow manages to seem vast and small at the same time. My hurried footsteps echoed off the ornate, vaulted hallways as I looked for some way into the Senate press gallery. At length, I discovered that the gallery had been shut because of protesters disrupting the vote.

Disappointed, I returned outside and huddled with other media beside the Senate steps. One by one, senators emerged and shuffled off to their chauffeurs. Opposite where I was, protesters had gathered to await the arrival of Vice President Mike Pence to his motorcade. As he descended the steps with a defiantly friendly wave, they hissed, booed and screamed at him. (RELATED: Pence Faces Protesters After Confirming Kavanaugh: ‘Let’s Do It’)

U.S. Vice President Mike Pence waves to protesters as he departs the U.S. Senate after presiding over the Supreme Court confirmation vote for Judge Brett Kavanaugh at the U.S. Capitol in Washington, U.S., Oct. 6, 2018. (Photo by REUTERS/Jonathan Ernst)

I then heard cries erupt across the street at the Supreme Court. News had reached the protesters there that Kavanaugh had been confirmed. I made my way over in time to see them storm the steps. They banged and clawed at the Court’s 12-ton bronze doors, which depict key scenes from 3,000 years of Western legal history. “Shut it down!” they yelled. The unintentional symbolism struck me.

They wept and wailed in desperation until dusk when the Capitol Police at last dispersed them.

Watching them on television or social media from a distance, it might be easy to dehumanize these protesters. Their hysterical behavior has been mocked by many. But as I slipped silently among them, reading their hand-written signs and looking into their eyes, I felt sympathy. Many were genuine victims of sexual assault and abuse. Others had some other pain which had been co-opted, distilled and channeled by shrewd organizers. (RELATED: Elevator Protester Admits She Works For Soros-Funded Organization)

Their targets that day were Donald Trump, Mike Pence and Brett Kavanaugh, as well as any senator who voted for him. Tomorrow it will be someone else. Some will not rest until the entire system of authority is pulled down. If this politically weaponized pain is to remain a permanent feature of our fracturing institutions, then perhaps weeping and wailing is the only appropriate response. (RELATED: The Kavanaugh Hearings — Ruled By Radicals)

Protesters bang on the doors of the U.S. Supreme Court after storming the steps as Brett Kavanaugh is sworn in as an Associate Justice of the court in Washington, U.S., October 6, 2018. (Photo by REUTERS/James Lawler Duggan)

The night of Friday’s government shutdown was my last in Washington before returning to North Carolina for Christmas. I decided to walk to my house from work, a trip that takes me along the Mall and past all the grand temples which have been raised to American ideals. They seem increasingly to reflect a glory that has departed.

Walking around the Capitol, I noticed that the beacon above the dome was lit. This symbol of democracy lighting the world seemed painfully ironic, indicating as it did that Congress was in session well into the night, trying in vain to avert yet another gridlocked failure.

The evening had an eerie, ominous feel. The moon was full, the weather unseasonably warm and rain fell in fits and starts. Every flag I passed remained at half-staff for former President George Bush, himself a symbol of bygone civility. (RELATED: Lindsey Graham Explodes On Senate Committee Over Kavanaugh Process)

There was a heavy sense of looming crisis. 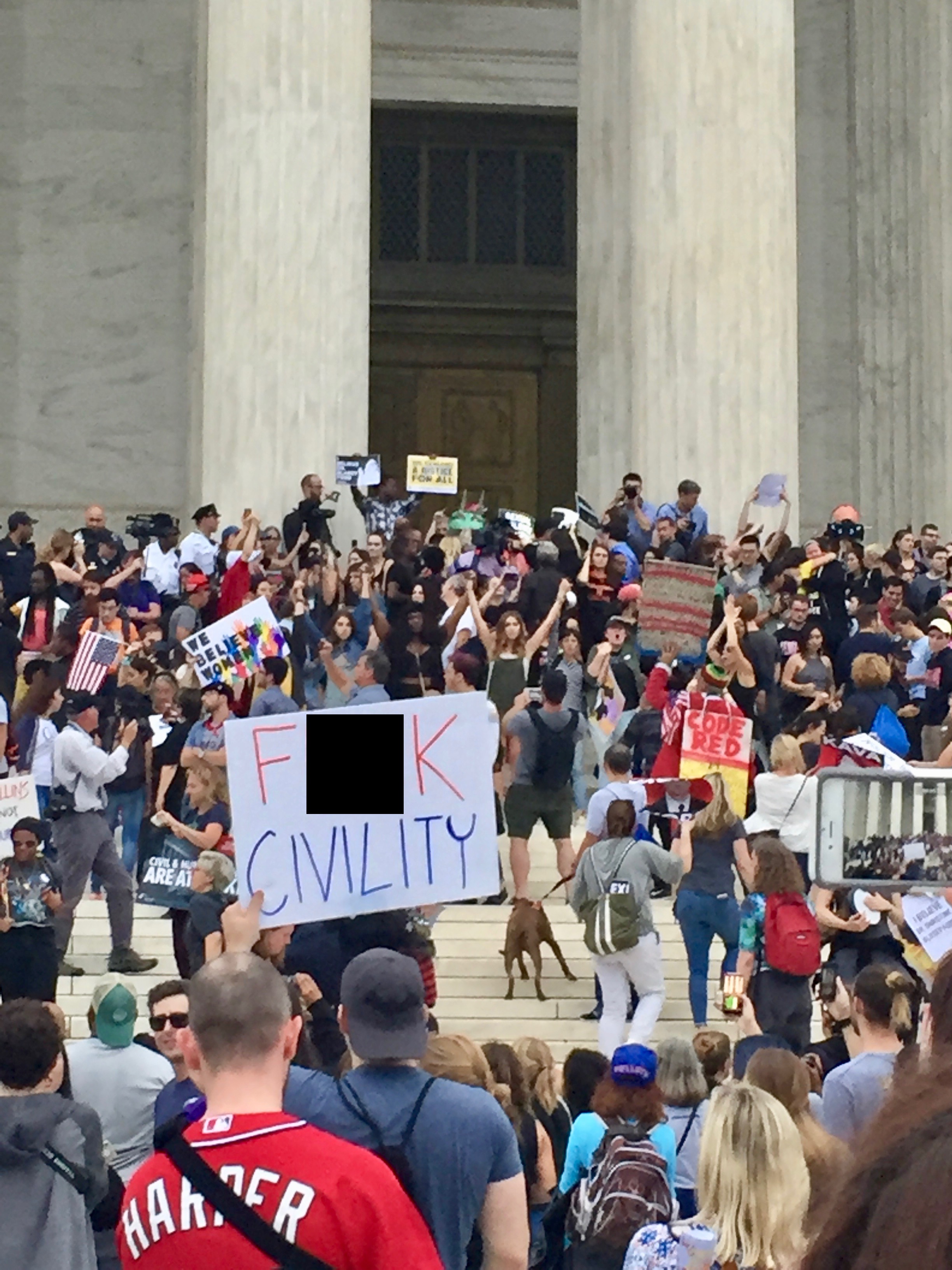 A man holds a sign that reads “F*ck Civility,” as protesters gather on the steps of the Supreme Court following the Senate confirmation of Brett Kavanaugh on Oct. 6, 2018. (Photo by Jon Brown/TheDC)

I made my way past the Supreme Court. I paused at the steps and looked up at its doors, remembering those who pounded on them months ago. I thought of the friends I know and care about who would gladly have joined them. I can no longer speak with many of them about the most important things. We talk past each other, our worldviews almost hopelessly incompatible.

I am seized by what can only be described as grief. I wonder if it is similar to what Americans must have felt in the years before the Civil War when differences became irreconcilable, the middle ground fell away and people began to line up on opposite sides.

For now, the battle is mostly spiritual. But for a nation whose people have less and less in common, it is questionable how long that will be so. (RELATED: A Mob Showed Up Outside Tucker Carlson’s House And Ordered Him To ‘Leave Town’)

To those at his hearing who were willing to tear it all down to destroy him and maintain power, Kavanaugh paraphrased the prophet Hosea. “You sowed the wind,” he warned. “For decades to come, I fear that the whole country will reap the whirlwind.”

He may have been speaking more prophetically than he knew.

Jon Brown was a Fall 2018 Student Free Press Association journalism fellow and is now an associate editor with The Daily Caller. Follow Jon on Twitter.