Billionaire Tom Steyer is dumping more money into his campaign to oust President Donald Trump as incoming Democratic lawmakers consider jumping on board the movement to impeach the president.

Steyer is plowing another $6 million into what some Democratic leaders worry is an ill-fated attempt to impeach the president, The Daily Beast reported Friday. Some liberal progressive lawmakers are warming to the idea, while House Majority Leader Nancy Pelosi pushes back.

He remains focused on “getting Donald Trump out of the White House,” Need to Impeach strategist Kevin Mack told reporters. “We’d like to have that happen through impeachment but if we have to we’ll beat him at the ballot box in 2020,” he noted, referring to speculation of Steyer’s political ambition.

That bulk of the cash will go to national cable and broadcast advertising in early presidential primary states like Iowa, Nevada, and South Carolina. Approximately $2.5 million will go to television campaigns while another $3.5 million is expected to be plowed into a digital effort.

The news comes after incoming Democratic Rep. Rashida Tlaib of Michigan said Thursday evening that “we’re gonna go in there and impeach the motherfucker.”

She pushed back on the thrust of the remark while defending Tlaib, saying it’s “nothing worse than the president has said.” 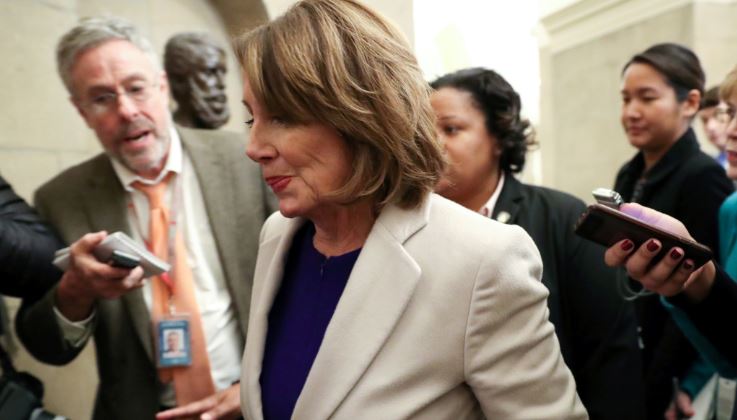 U.S. House Speaker Nancy Pelosi (D-CA) is trailed by reporters as she returns from meetings at the White House. January 4, 2019. REUTERS/Jonathan Ernst

Neither Steyer nor any other Democrat pushing for impeachment have explained on why Trump should be removed. (RELATED: Steyer Dumps More Money ON Campaign Ads As He Gears Up For Possible White House Run)

“You gave Democrats the power to hold him in check,” the billionaire said in an ad. “A majority vote in the House can impeach him and expose his lawless behavior for all to see. They just need the will.”

Steyer created political advocacy group NextGen America in 2012 and has shoveled more than $100 million into various political campaigns since 2016. He has seen little success on this front, however, as many of the candidates and initiatives he has promoted in the past have fallen flat.

The billionaire Democratic financier forked over more than $5 million into Tallahassee, Florida, Mayor Andrew Gillum’s unsuccessful gubernatorial run. Gillum was one of a handful of Democratic candidates pushing for Trump’s ouster.