With almost all eyes of the nation focused on the final four football playoffs between the Patriots-Chiefs and Rams-Saints, in the run-up to Super Bowl 53, President Trump’s Twitter posts will probably echo the enthusiasm he has for the game and the admiration he has for the players. What you might also hear from him is the shocking story of how the NFL is treating retired players suffering from degenerative brain diseases from their playing days in the league. This is the biggest scandal surrounding the NFL in the wake of the biggest profits in their history. This is a scandal worthy of a presidential tweet.

In January 2017, the NFL agreed to an uncapped settlement to compensate retired players for their traumatic brain injuries from repetitive hits to the head incurred while playing in the NFL. The NFL Concussion Class Action Lawsuit was finally settled and went into effect. The NFL’s liability is estimated to be between $1.5 and $2 billion.

Although the NFL did not admit guilt it is widely known they used tobacco industry tactics to deny links between football and degenerative brain disease, going so far as stacking medical panels with NFL friendly members and publishing, now debunked, scientific papers, to mislead players and the public. Just the same, once this case was settled class members held out hope that the league would keep its word and follow through on its promises. It was not to be.

As of Sept. 10, the total eligible class members was 12,816. Of the 1999 claims that have been submitted, after a year and a half, only 394 have been paid. That’s less than 20 percent. The retired players are predominately African-American. Their injuries caused illnesses such as Dementia, Parkinson’s, Alzheimer’s, ALS and death. 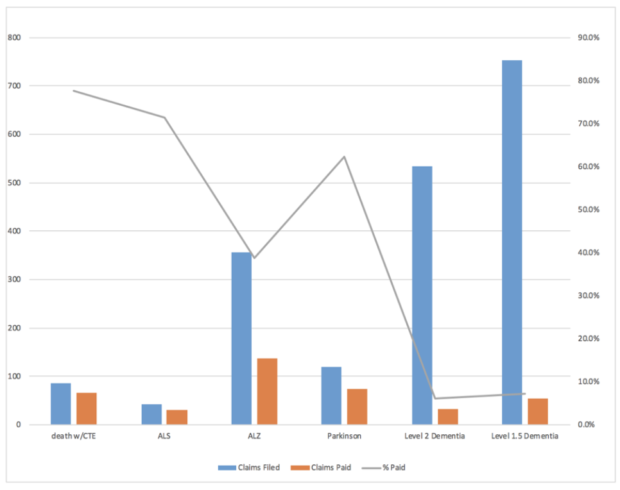 Players who do file claims certified by a neurologist see their claims sent to a “audit ” process meant to run out the clock. By failing to process and pay these legitimate claims the NFL is essentially accusing the sick and dying players of fraud and stalling for time.

One example of this is 63 year old Cornell Webster. He played four years as a defensive back for the Seattle Seahawks. He now has Alzheimer’s disease and filed a claim in the NFL Concussion Settlement. His claim was filed June 29, 2017. That November, he was informed his claim was put into audit. Months passed as the audit was allegedly processed.

In March 2018, he received notification his claim had been cleared from audit with no adverse finding, and would now be processed on its merits. More months passed by, and on August 10, 2018 Cornell’s family received a notice of monetary award. It was great news. However, under the settlement, the NFL has 30 days to appeal a monetary award determination.

On Aug. 29, the Webster family was shocked to learn Cornell’s claim had been placed back in audit. This, after more than a year of scrutiny, is unconscionable. And the news could not have come at a worse time. Cornell wandered off from his home, and a silver alert had to be issued to locate him. He was found but unfortunately had fallen, suffered a head injury and was hospitalized. Cornell has been in a hospital since Sept. 5. He is restrained at all times because he wanders off and allegedly yells out like he is still playing football. She is worried about bills piling up. He has an approved monetary award but the NFL put his claim back in audit for the second time. This prolongs claim process indefinitely while the audit is being conducted — with no time limits. Doctors are considering sending him to hospice.

Sadly, the handling of Cornell’s claim is the NFL Concussion Settlement seems less the exception and more the rule.

Reports of endless delay and deny tactics through audits, appeals, and request for more paper work are the typical treatment by most players who have submitted claims is the case. So much so that a phrase has been coined by those seeking benefits to describe the NFL’s behavior. “Delay. Deny. Wait until they die.” One has to wonder if Cornell’s accident could have been avoided had he received his benefits timely and been able to obtain the care he needed and deserved.

The NFL is infamous for setting up benefit programs for injured players, then systematically denying those benefits when they are sought. When that happens we pick up the NFL’s tab.

The Washington Post reported in 2013, “The cost will fall on taxpayers, according to a 2008 congressional research report on NFL disability. There are approximately 18,000 NFL alumni, and when they can’t pay for their health care it has an impact on “society as a whole,” the report said.”

What drives the NFL to behave like this? Is it greed or something even more sinister?

The racial demographics of these retired players are no secret; they are approximately 80 percent African-American. The NFL has a history of treating these human beings as livestock. Tex Schramm, a former owner of the Dallas Cowboys, reportedly described the situation as such: “The players are like cattle, and the owners are ranchers and the owners can always get more cattle.”

Who is looking out for the football players?

A 2016 New York Times report describes how conflicted the NFL is, even within their own committees staff. “In fact, most of the dozen committee members were associated with N.F.L. teams, as a physician, neurosurgeon or athletic trainer, which meant they made decisions about player care and then studied whether those decisions were proper.” Another 2016 New York Times report said, “It is the latest in a long history of instances in which the N.F.L. has been found to mismanage concussion research, dating to the league’s first exploration of the crisis when it used deeply flawed data to produce a series of studies.”

But one might ask, how could this happen in our American Justice System?

Some have wondered if the chief architect of the NFL contusion settlement, attorney Chris Seeger, who represented the football players, isn’t too cozy with the NFL to the point that he is compromised. After all, the case was settled even before the discovery phase, with Seeger’s law firm pocketing over $52 million dollars. He also petitioned the court to cap individual plaintiffs attorneys’ fees, discouraging attorneys from taking players cases. And it worked. Due to fees being slashed by more than 40 percent in some cases, many firms stopped taking the cases. It appears the fix is in.

Court documents have shed some light on the extent to which Seeger profited from his clients while working as the lead co-council defending the football players in their class-action court case against the NFL.

In an even more brazen breech of his duty to the players, Seeger allegedly steered many disabled NFL players to get loans from a financing firm without disclosing that he was a board member of the bank.

Seeger was successful in persuading Judge Anita Brody of the United States District Court for the Eastern District of Pennsylvania that “predatory” investors were “taking advantage of players” by offering them pre-settlement loans in advance of their possible payouts, with interest rates approaching 40 percent, and he requested that the courts prevent a list of 15 companies from doing any business with the ex-NFL players.

Two of those settlement companies sent a memo to the judge arguing that Seeger was their competitor and did not disclose his conflict of interest in the case. They pointed out he sits on the board of directors of Esquire Financial Holdings, a bank that provides high-interest cash advance loans to players who are waiting for a possible settlement from the NFL. Seeger helped Esquire develop its concussion settlement funding program and also recommended the bank to attorneys for former NFL players.

The federal judge overseeing the case seems to be out to lunch. She is effectively semi-retired but is still riding the bench — with a lifetime appointment — at the ripe old age of 83.

In audio recordings of proceedings two years into the case, she can be heard asking the football players attorney, Chris Seeger, “What is TBI?”

The answer: Only what the entire case is about: traumatic brain injury.

We cannot stand idly by and allow this to continue while a multi-billion dollar taxpayer subsidized enterprise — the NFL — exploits these men and their families, waiting for them to die.

Roger Stone is a legendary Republican political consultant and a veteran of many national Republican presidential campaigns. He’s also the men’s fashion correspondent for The Daily Caller and editor of Stonezone.com. A. Howard Brown is a writer and Black Lives Matter activist who was born in Kingston, Jamaica. He resides in Philadelphia and works in the health-care industry.