The Native American activist who faced off Friday with a group of Catholic high schoolers at the Washington, D.C., March for Life demanded from the steps of the nation’s largest Catholic church that the boys be “reprimanded” both now and in the future.

The activist, Nathan Phillips, also called on the Catholic Church to offer reparations to indigenous people, according to video obtained by The Daily Caller.

Phillips, along with a group of other chanting protesters, seemingly endeavored to enter the Basilica of the National Shrine of the Immaculate Conception in D.C. during a Vigil Mass on Saturday, as first reported by the Catholic News Agency (CNA).

“If anyone wants to go inside and pray, you can go in small groups,” another demonstrator says. “No reason why they can stop you from going to pray.”

“Just say you’re going to Mass,” another person advises, while someone else says, “I’ll watch the cops.”

When they reach the church, several protesters attempt to enter the building before security personnel shuts the doors.

After being introduced as “Uncle Nate,” Phillips goes on to read prepared remarks:

We demand that the students of Covington Catholic High School be reprimanded — not just by the school officials as seniors, but by their upcoming universities. We demand the Catholic Church hold themselves responsible for the hundred-plus years of genocide that our indigenous people have endured — and still persist through — by [implementing] the following: with reparations of land and restorations to the indigenous peoples in the U.S. and across the world.

We demand that the Catholic Church revoke the papal bulls related to the doctrine of discovery, which laid the foundation for religious prejudice and the dehumanization of indigenous peoples.

The list of demands is met with loud howls and shouts of approval from the crowd.

A security guard on the scene reportedly characterized the incident to CNA as “really upsetting,” especially given that the church was packed with Christians who had attended the annual March for Life in the nation’s capital. (OPINION: ‘Gosnell’ Is A Sobering Depiction Of Evil Hidden In Plain Sight)

“We had hundreds and hundreds of people from all over the country come here to celebrate life — to celebrate each other together,” the guard was quoted as saying. “That a protest tried to come inside during Mass was really the worst.”

About 60 protesters had gathered outside the church to protest the Covington Catholic boys’ alleged taunting of Phillips, as well as the supposed “colonial violence that the Catholic Church reproduces every day,” according to the Canadian Broadcasting Corporation. (RELATED: Conservative Pundits Hit Back Against Trending ‘#ExposeChristianSchools’) 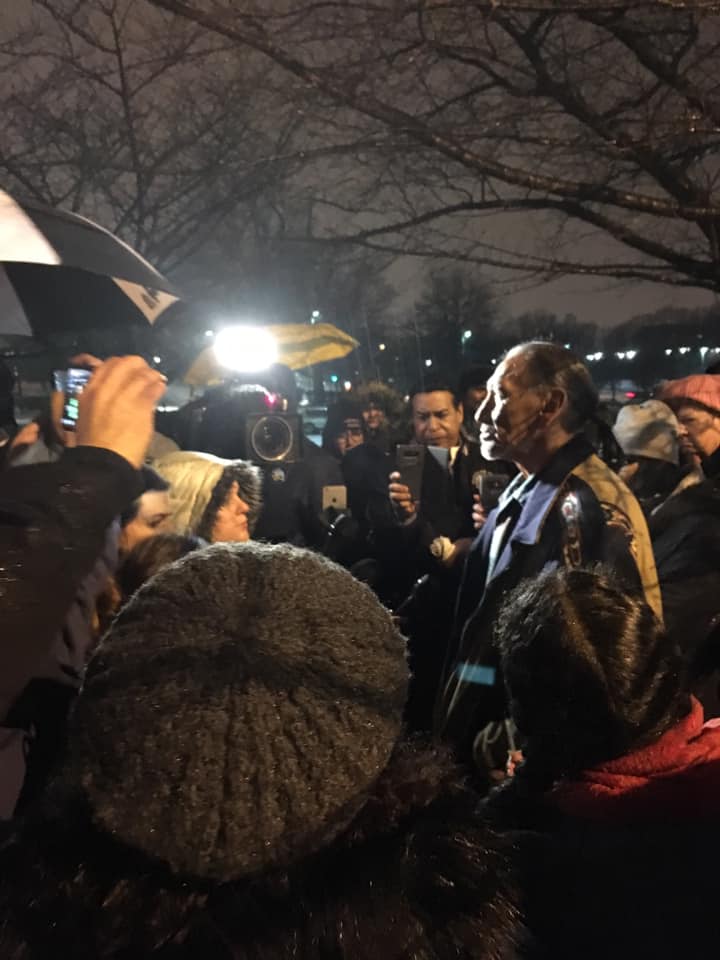 Security for the church reportedly had to lock the doors to the basilica during a “tense” moment when the activists seemingly intended to enter the sanctuary while banging their drums and saying chants. (RELATED: Los Angeles Bishop Decries ‘Literally Satanic’ Social Media Backlash Against Covington Boys)

“I was outside when the protesters were coming up the steps of the basilica,” an anonymous seminarian told the CNA. “I was curious because of the noise and chanting. At first, I didn’t take it too seriously, but as they came up the steps we were told to go inside. I was with a group of people from California there for the March for Life. The security people shut the doors and locked them.”

Protesters banged on the church doors, the seminarian recounted, and the parishioners were not allowed to leave the building until the protest dispersed.

“We have been informed by police that we need to get off our occupied indigenous territory,” a demonstrator says in the video.

A spokesperson for the basilica did not respond to The Daily Caller’s request for comment at the time of publishing. 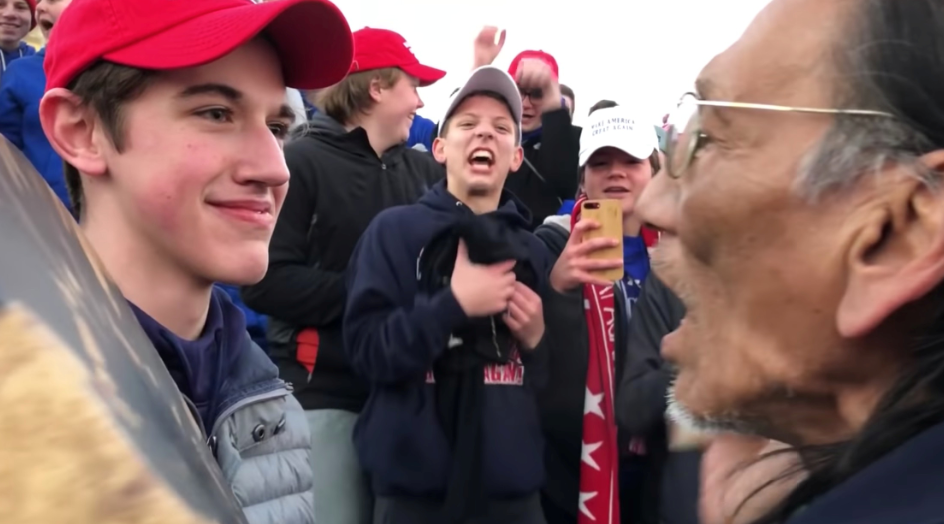 Phillips and the teenage boys from Covington Catholic High School in Kentucky remain engulfed in a media firestorm after many on social media — including major media figures — piled on the boys for allegedly taunting him while they waited for their bus at the Lincoln Memorial on Friday. (RELATED: Apologies Roll In For Catholic School Protesters As Fuller Picture Of Events Emerges)

Later footage emerged that showed their original response was ill-informed, and many apologized for so quickly heaping scorn on the MAGA hat-wearing Catholic teenagers.

Some of the boys who were involved told “Fox & Friends” on Wednesday that they have received horrific threats from people wishing them to be sexually abused and burned alive. (RELATED: Covington Catholic Students Hit With Threats Of Being Burned Alive And Sexually Abused)