President Donald Trump’s leaked private schedules show that he spends a majority of his day in “executive time,” but the White House is disputing the notion that this means the president isn’t hard at work.

A White House source leaked three months of presidential schedules to Axios this week, a move that administration officials said filled the White House with “disgust” and “disbelief.” The private schedules were relatively light on official events and meetings, and instead revealed that Trump spends about 60 percent of his day on unstructured “executive time.”

Members of the administration are now pushing back on the idea that Trump is not actually working during his “executive time” and are attempting to explain what the president does on a typical day. 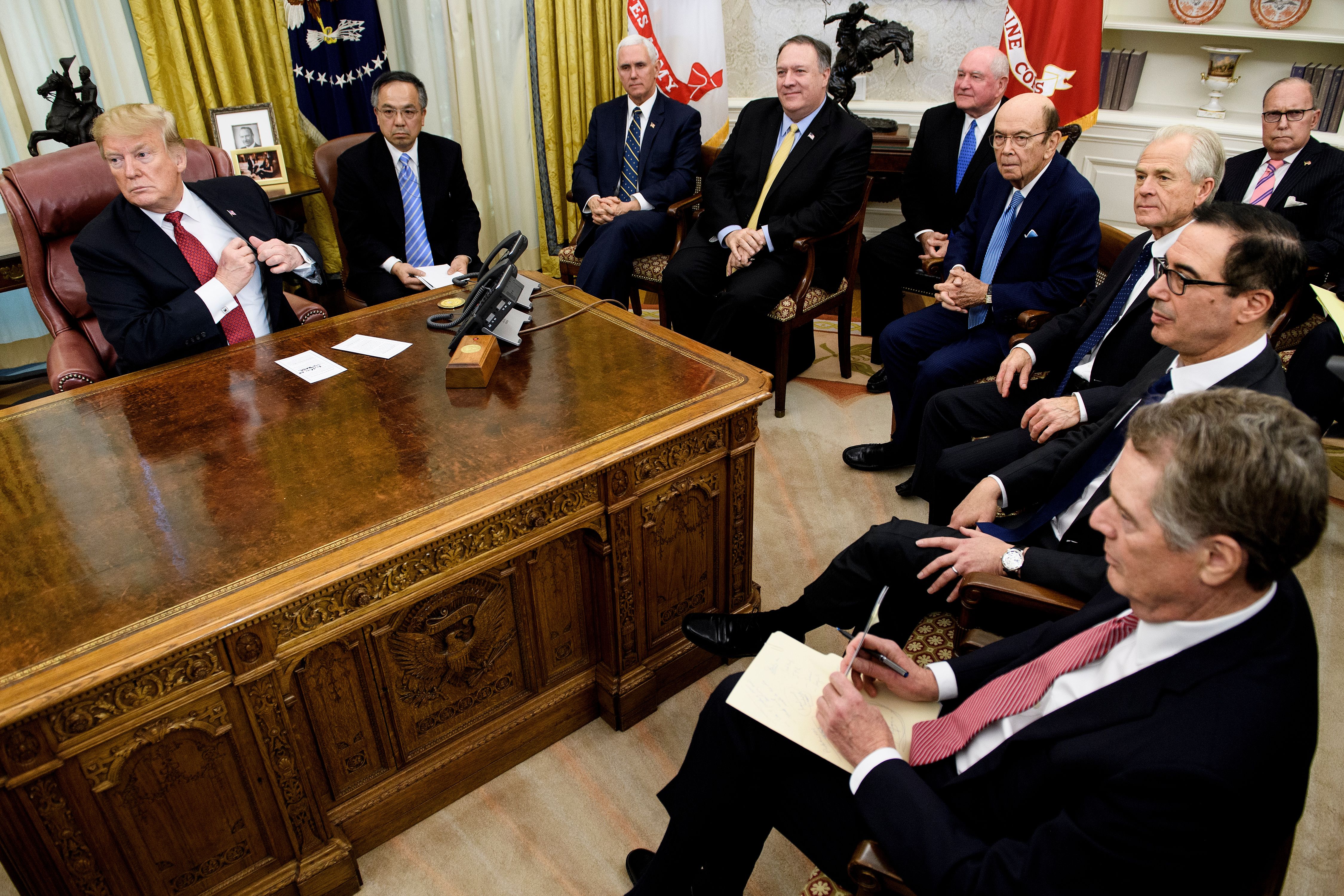 US President Donald Trump (L) waits with US Vice President Mike Pence (3L), US Secretary of State Mike Pompeo (4L), US Secretary of Agriculture Sonny Perdue (5L), US Secretary of Commerce Wilbur Ross (5R), Peter Navarro (4R), US Trade Representative Robert Lighthizer (3R), US Secretary of the Treasury Steven Mnuchin (2R), National Economic Council Director Larry Kudlow (R) and others for a meeting with China’s Vice Premier Liu He and other Chinese officials in the Oval Office of the White House January 31, 2019 in Washington, DC. (Photo by BRENDAN SMIALOWSKI/AFP/Getty Images)

“It’s not really an accurate representation of what the president spends his day doing,” an administration official told The Daily Caller. “Reporters really do lament that they have a tough time keeping up with him.”

As Axios noted in its article, people familiar with Trump’s schedule say the president will often use “executive time” to mask meetings and phone calls that he wishes to remain private. For example, Bloomberg reported that Trump met with former presidential candidate Herman Cain during what was scheduled as “executive time” on Jan. 30.

What a disgraceful breach of trust to leak schedules. What these don’t show are the hundreds of calls and meetings @realDonaldTrump takes everyday. This POTUS is working harder for the American people than anyone in recent history. https://t.co/n1HrxmCsiB

The administration official reiterated such sentiments to the Caller, explaining, “A lot of these calls with foreign leaders and impromptu meetings with leaders in the House and Senate wouldn’t be on a public schedule.”

“It’s not always that the other person wants the meeting to be public,” the official said. “When you’re trying to make deals with other countries they’re not going to deal with you if you’re going to tell the world every little thing.”

Trump’s interviews with the media also reveal that he often spends his time outside of the bounds of the leaked schedules. On Feb. 1, for example, the president spent 85 minutes talking to The New York Times despite only having 15 minutes scheduled for a “media engagement” prior to 30 minutes of “executive time.”

The president also spoke to the Caller in the Oval Office on Jan. 30 for approximately 37 minutes. In that case, Trump’s leaked schedule said that he had 30 minutes for a “media engagement” at 4:30 pm.

According to a source who has met with the president multiple times, the president is an avid multitasker, often running meetings into one another, scheduling additional meetings, and assigning tasks to staff members at the same time.

But many argue that the lack of specificity in the “executive time” classification means he’s likely watching cable news programs — something he’s reportedly known to do — or firing off tweets. 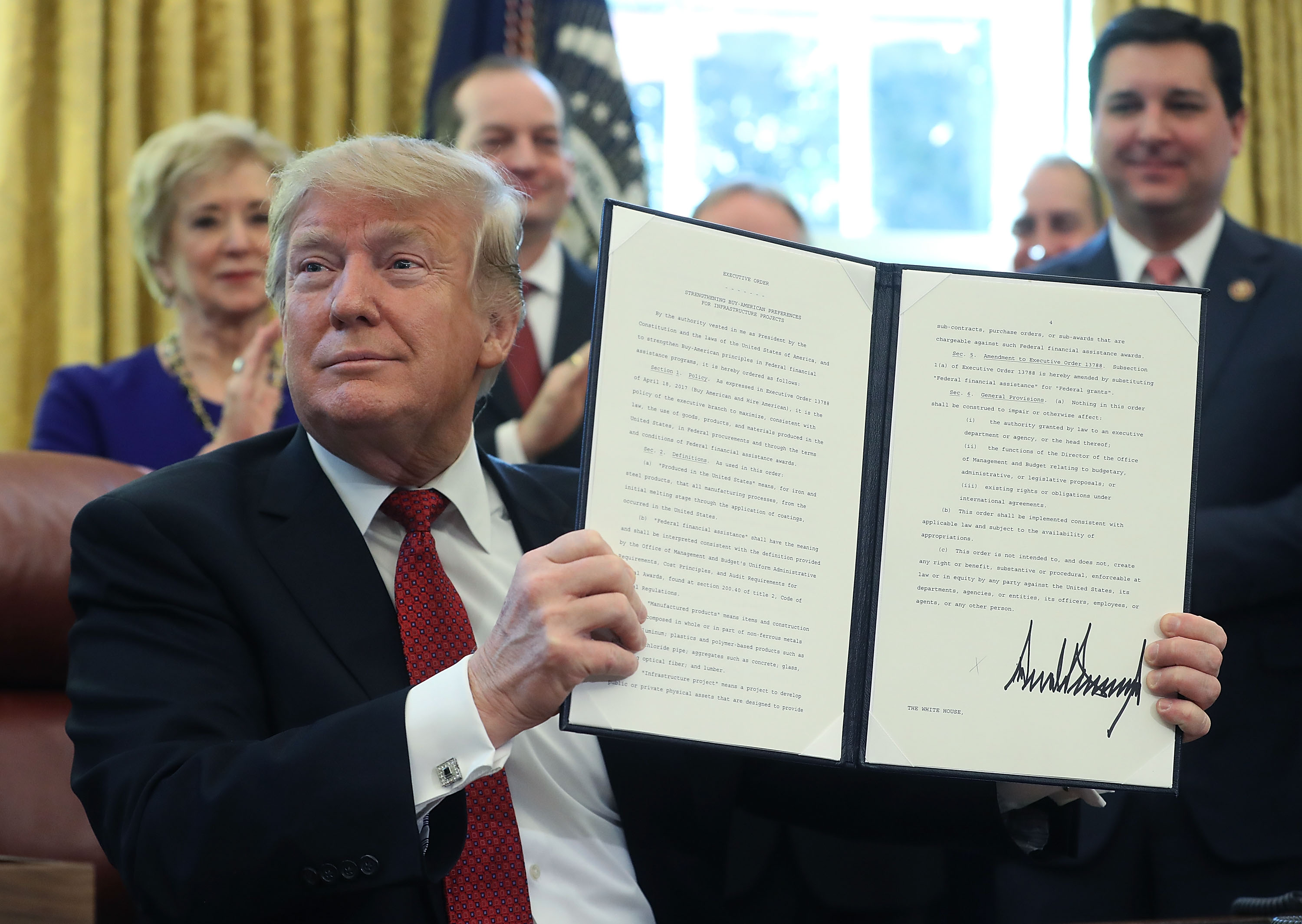 WASHINGTON, DC – JANUARY 31: U.S. President Donald Trump holds up an executive order he signed during a meeting with members of Congress and American manufacturers, to strengthen the administrationÕs buy American policy, in the Oval office on January 31, 2019 in Washington, DC. (Photo by Mark Wilson/Getty Images)

White House press secretary Sarah Sanders responded to the schedule leaks by calling Trump the “most productive President in modern history,” attributing such success to his “creative” scheduling.

“President Trump has a different leadership style than his predecessors and the results speak for themselves,” Sanders said in a statement.

White House adviser Kellyanne Conway pointed out during a press gaggle Monday that the leaked schedules get sent to “388 people” within the White House. A more detailed schedule is distributed to just a handful of senior officials, and might include more sensitive meetings and phone calls.

“The purposes of this leak was twofold,” the administration official said. “One is to make the person seem more important than they are because they clearly don’t have access to the president’s other schedules.”

The other reason, according to the official, is to hurt the president by making him appear less busy than he really is. Former White House aide Cliff Sims reached a similar conclusion when speaking to the Caller on Monday.

“This leak is truly disgraceful. There’s no obvious rhyme or reason for it other than to cause mayhem and increase paranoia. Whoever leaked it knew it would be used to portray the President as not working hard,” Sims asserted.