The Supreme Court barred enforcement of a Louisiana law called Act 620 or the Unsafe Abortion Protection Act on a five to four vote Thursday night.

Chief Justice John Roberts joined the high court’s liberal bloc to temporarily prohibit the law’s implementation over the dissent of Justice Brett Kavanaugh. Justices Clarence Thomas, Samuel Alito, and Neil Gorsuch noted their dissent but did not join the Kavanaugh opinion. The act was scheduled to take effect on Friday.

The Louisiana measure provides that physicians who perform abortions must have admitting privileges at a local hospital. Abortion advocates say the law is identical to a Texas regulation which the Supreme Court struck down in 2016 in a case called Whole Women’s Health v. Hellerstedt.

Justice Samuel Alito delayed implementation of the Louisiana law by one week on Feb. 1. That order, called an administrative stay, was necessary so that the justices could review court filings from each party. Alito hears emergency petitions which arise out of the 5th Circuit.

A federal trial judge found the law unconstitutional in view of the Supreme Court’s ruling in the Texas case. But the 5th U.S. Circuit Court of Appeals reversed, finding that Act 620 created a tangible (but limited) benefit without seriously inhibiting abortion access.

Pro-choice groups counter that the law will leave just one abortion provider in the state. As such, they warn that Act 620 is effectively a stealth measure to eliminate abortion in Louisiana. (RELATED: Forthcoming Biography Reveals New Details Of Roberts’s Obamacare Vote)

Louisiana’s abortion providers filed an emergency application at the high court asking the justices to temporarily lift the 5th Circuit’s decision in January. The Court granted that request Thursday night. The order, called a stay, will remain in effect until the Court processes a formal request from the abortion providers to review the 5th Circuit’s ruling. That process generally takes several months. 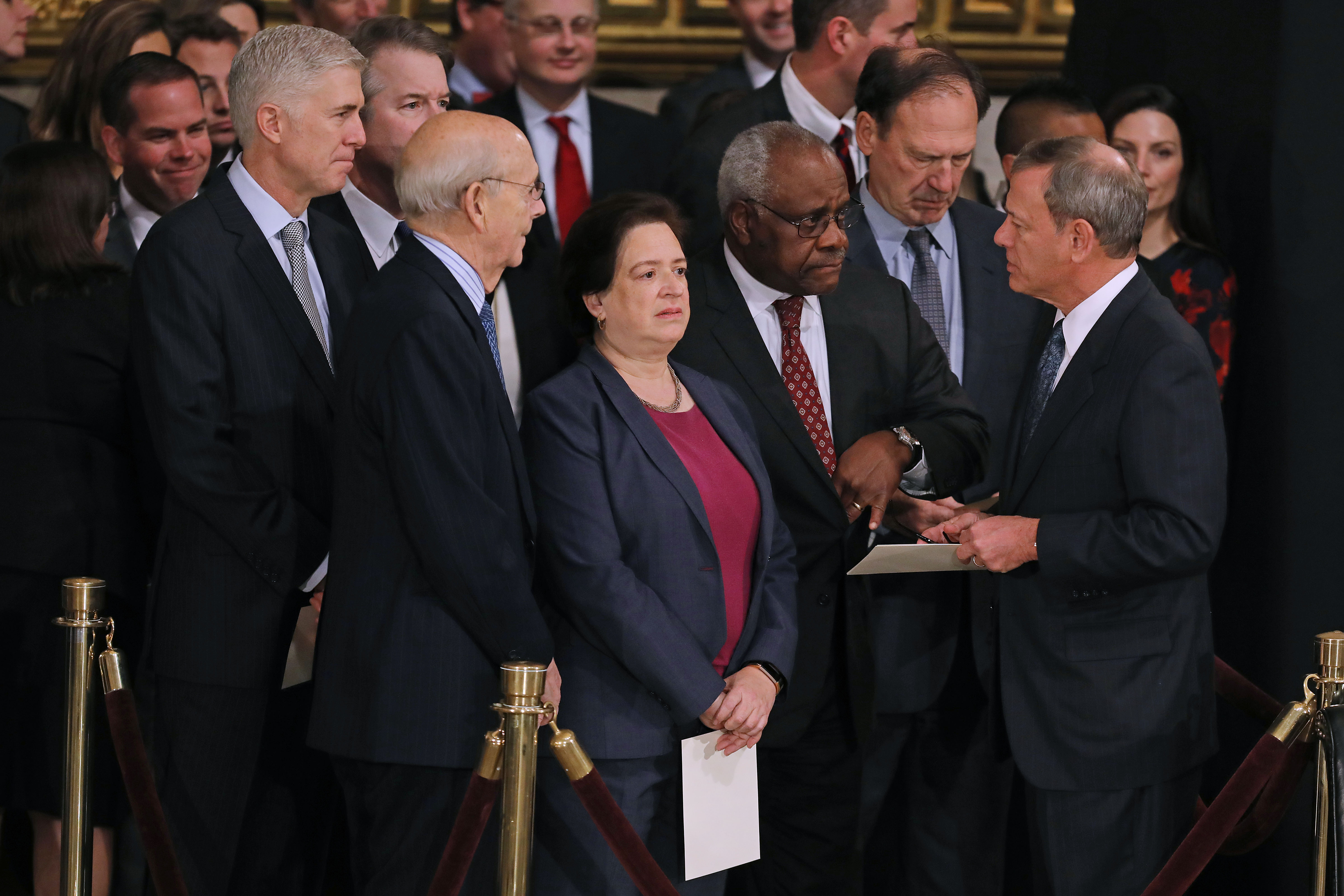 Members of the Supreme Court talk before a memorial ceremony for former President George H.W. Bush in the Capitol Rotunda on December 3, 2018. (Chip Somodevilla/Getty Images)

As is typical of orders of this nature, the majority did not give reasons for granting the request.

Speaking after Thursday’s decision, Nancy Northup of the Center for Reproductive Rights predicted the plaintiff abortion providers would ultimately prevail.

“The Supreme Court has stepped in under the wire to protect the rights of Louisiana women,” Northup said in. “The three clinics left in Louisiana can stay open while we ask the Supreme Court to hear our case. This should be an easy case — all that’s needed is a straightforward application of the Court’s own precedent.”

In dissent, Kavanaugh said that the Court should have allowed implementation of the law to resolve the dispute over its effects on access. If physicians in the state’s three abortion clinics were still unable to attain admission privileges after a 45-day transition period, Kavanaugh said they could bring new claims against the state. On the other hand, if they successfully obtained admission privileges, then abortion access would not be burdened and the dispute would terminate.

The case was seen as an important test for the Court’s newly constituted conservative majority. That Roberts voted with the Court’s liberals suggests he could take a measured, cautious approach to abortion cases in the near term. A decision permitting implementation of the law would have indicated a decisive break with recent pro-choice precedents.

That rupture may still come in the high court’s next term. It’s likely that the Supreme Court will grant the plaintiffs’s request to review the 5th Circuit’s decision in full and decide upon the constitutionality of Act 620. What Roberts will do at that stage is unclear — though pro-choice litigators have reason to be heartened by his Thursday decision, the chief was among the dissenters in the 2016 Whole Women’s Health decision. As such, he may be comfortable overturning it after full briefing and argument.

Thursday’s decision marks the second time that Roberts has sided with the liberal justices on an abortion issue in the current term. The high court, with Roberts and Kavanaugh in the majority, denied review of three cases relating to Republican efforts to disqualify Planned Parenthood from Medicaid eligibility in December 2018.

Approximately 10,000 abortions are performed each year in Louisiana.