When asked about the restriction on detention beds, Senate Minority Whip Dick Durbin told The Daily Caller News Foundation, “It emerged because the Republicans [in] the Trump administration [have been] taking people and deporting them who are not really criminally dangerous. You know, they have violations of immigration law, for example. Violations of traffic laws or misdemeanors but they’re no danger to this country.”

He added, “There’s no difference of opinion between the parties as I know it when it comes to dangerous people in this country. They have to go. But when it comes to people who have traffic violation or simply cross the border or overstayed a visa… It’s totally different. They have gone too far.”

This latest provision, which was scolded in a presidential tweet on Sunday as “crazy,” drew criticism from Republicans.

“This is a poison pill that no administration, not this one, not the previous one, should ever accept,” McConnell said from the Senate floor on Monday. “Imagine the absurdity of this: House Democrats want to set a limit on how many criminal aliens our government can detain.”

In a joint press conference, in which Senate Minority Leader Schumer was joined by Demcocratic Sens. Durbin, Leahy and Tester, they spoke in unison about the compromise:

“One thing I know for sure, these months of shutdown policy must come to an end. Mr. President, sign this bill. We have a bipartisan proposal to accomplish goals… Anyone who says unless I get all my way, no way, is doing a real disservice to the American people,” Schumer told reporters in Tuesday’s press conference.

Meanwhile, Senate Majority Leader McConnell appeared to change his tune when he spoke to reporters before the Democrats’ own press briefing. 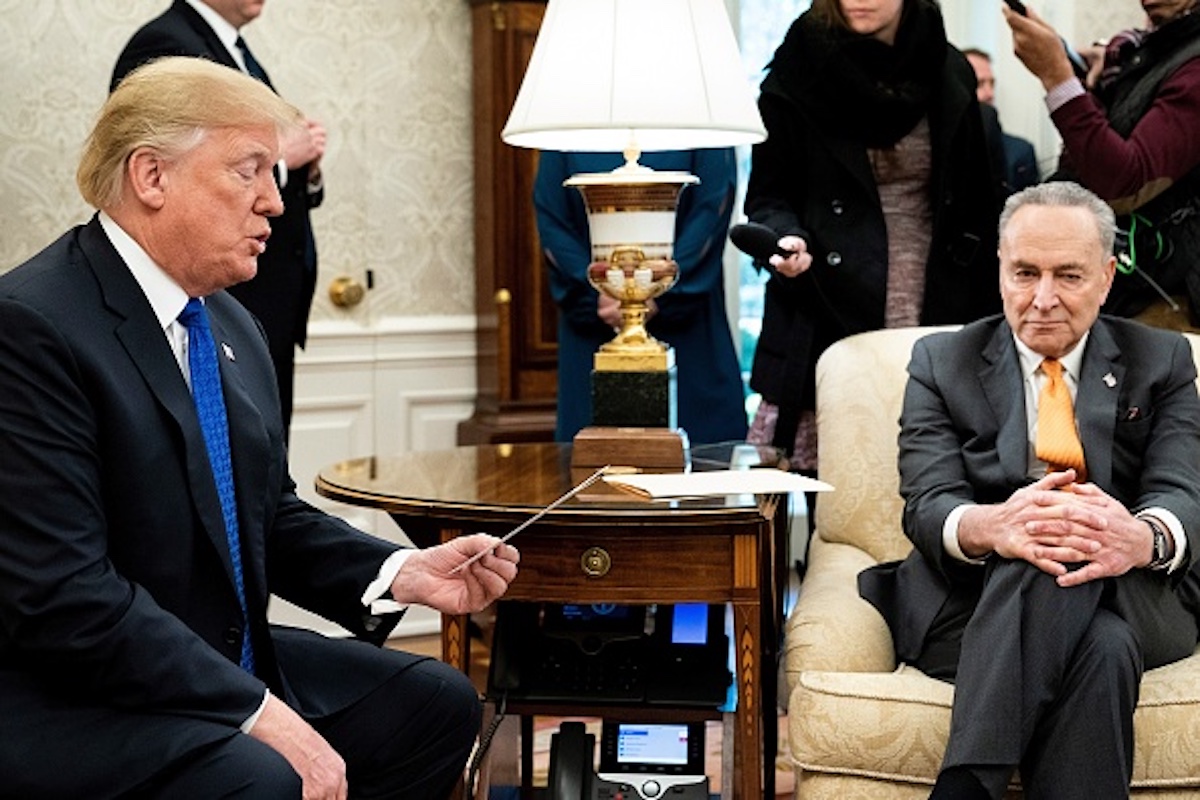 “I hope [President Trump will] sign it,” Sen. McConnell told reporters afterward. “I think he got a pretty good deal.” (RELATED: Republicans Divided On ‘Agreement In Principle’ Over Wall Funding As Government Is Days Away From Shutdown)

The 17-member committee, comprising members of both House and Senate appropriations committees reached a deal “on principle” late Monday evening, which was swiftly excoriated by many conservative analysts on cable news and social media.

On Tuesday, Alabama Sen. Richard Shelby, who was part of the committee, told TheDCNF, “Well it’s not a question of [whether the $1.3 billion allocated for border security in the tentative deal is] ‘sufficient.’ I would like more myself. I would like. Five or ten billion. You know, whatever we need. But this is where we are but we did get a lot of concessions and everything else. We probably got as much money we’ll spend right now but let’s see where we go.”

President Trump said that he “wasn’t happy” with the tentative deal, but did signal he was open to negotiate if allowed to include some of his own adjustments: “I’m adding things to it. It’s all going to happen, where we’re going to build a beautiful, big, strong wall.”

The president also voiced optimism on the likelihood of averting another shutdown, “I don’t think you’re going to see a shutdown. If you did have it, it’s the Democrats’ fault.”

However, when asked about the President’s desire to make amendments to the deal, Schumer deadpanned, “I have no idea what he’s talking about,” ostensibly implying that any such measure is off the table for congressional Democrats.

Just a week ago, a CBS poll found that 76% of viewers “approved” the message in Trump’s State of the Union address, where he doubled down on calls to build a wall across a southern border. The president reiterated this desire in a Monday night rally in El Paso, Texas, where tens of thousands of supporters periodically erupted into chants of “build the wall!”