“This is a pro-jobs approach to lowering greenhouse gas emissions,” Cassidy said in a statement. “Instead of pie-in-the-sky, feel-good pipe dreams, let’s do what data and science say actually works.”

The World War II-style mobilization the bill calls for also includes retrofitting every building in the U.S. to be more energy efficient and also cutting emissions as much as possible from every sector of the economy. (RELATED: Here Are 5 Big Reasons California’s High-Speed Rail Project Became The ‘Train To Nowhere’) 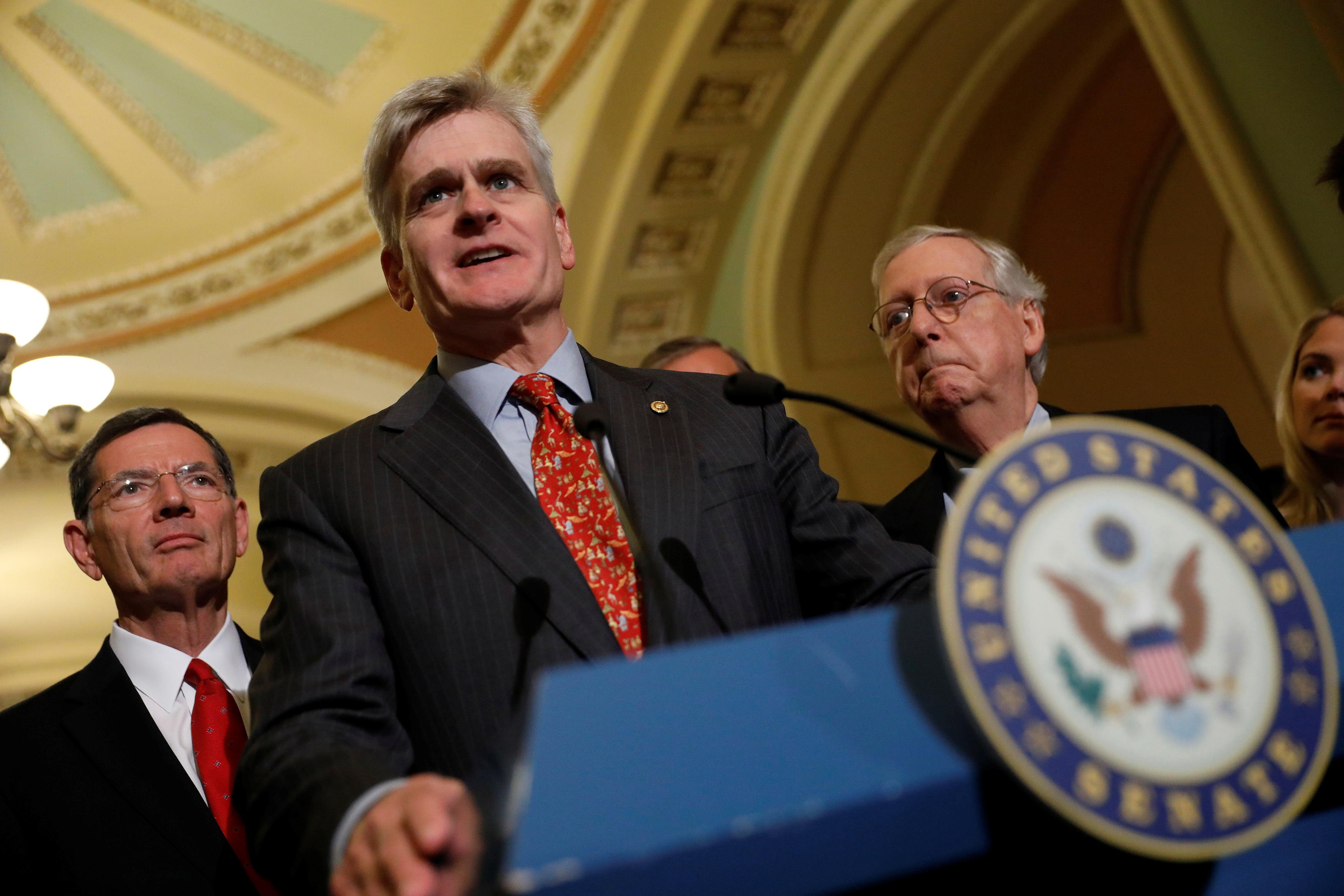 Republicans panned the plan as “socialist” that ignores reality. Indeed, Ocasio-Cortez and her staff have made no secret that the ultimate goal of the Green New Deal is “redistributing power to workers” and “marginalized communities.”

Despite the Green New Deal being endorsed by every Democratic senator running for president in 2020, it failed to win over House Speaker Nancy Pelosi and other top Democrats. Ocasio-Cortez’s bungling of the Green New Deal’s rollout only added to Democrats’ woes.

Stop trying to distract from the fact that the GOP has no plan on climate change.

I’m headed to the Senate Floor to issue you a challenge to admit for the first time:

Schumer’s claim that “the GOP has no plan on climate change,” however, was soon met with GOP lawmakers presenting policy ideas for how to cut emissions without more regulations or taxes. Those GOP lawmakers say innovation, not big government, can solve global warming.

Cassidy’s white paper called for more investment in natural gas, though he didn’t lay out any specific policies. Then again, neither did the Green New Deal, which Cassidy said would only increase emissions as more energy-intensive industries are offshored.

“Lowering greenhouse gases is important,” Cassidy said. “Louisiana loses a football field of land every 100 minutes due to erosion and rising sea level. But the Green New Deal would actually increase global emissions by incentivizing manufacturing to move to high-emitting countries like China.” 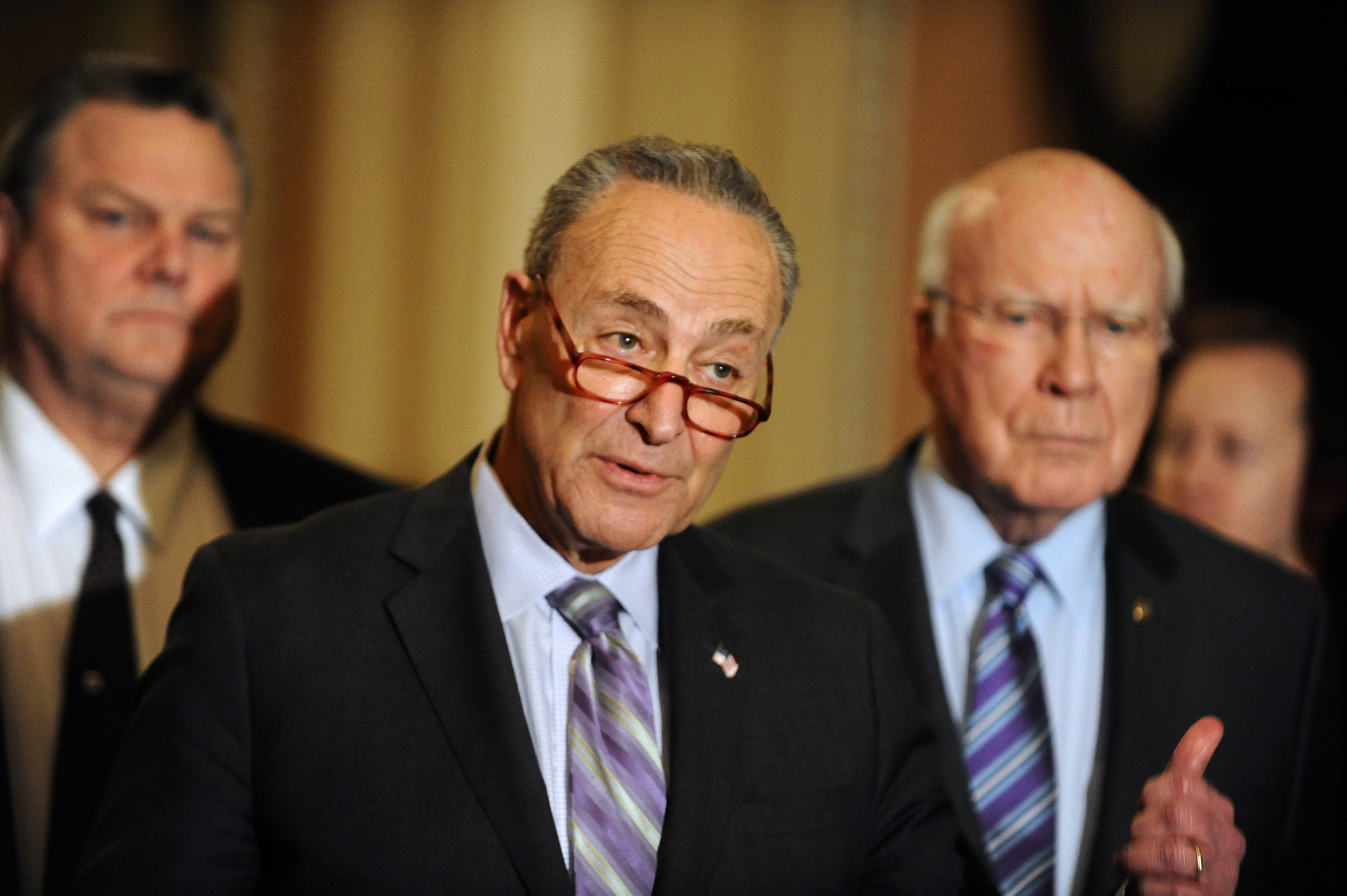 Democratic Sen. Chuck Schumer of New York speaks to the media at the U.S. Capitol after a tentative deal is set to avert a second partial government shutdown in Washington, U.S., Feb. 12, 2019. REUTERS/Mary F. Calvert

In the House, top Republicans on the Committee on Energy and Commerce sent a letter to Democratic New Jersey Rep. Frank Pallone, the committee’s chair, and Democratic New York Rep. Paul Tonko, a subcommittee chair, calling for bipartisan policies to cut emissions that focused on innovation not heavy-handed government.

“We want America’s innovators to develop the next technologies that will improve the environment and create jobs here at home,” Reps. Greg Walden of Oregon and John Shimkus of Illinois wrote to their Democratic counterparts Thursday.

Walden, the committee’s ranking Republican, and Shimkus criticized the Green New Deal, including how it included “numerous unrelated, prohibitively expensive policy goals” that have nothing to do with global warming, like universal health care.

The two Republicans mentioned work the Energy and Commerce Committee has done over the past two years to ease permitting for hydroelectric dams and natural gas, incentivize carbon capture and streamline regulations for advanced nuclear reactors.

While they could not support policies that restrict energy or make it more expensive, the lawmakers wrote, “[T]here is broad bipartisan agreement that prudent steps should be taken to address current and future climate risks.”

“What will be crucial going forward is rigorous examination of the costs, effectiveness, and economic impacts of any such policy steps proposed to address these risks. And we hope you will be open to scrutiny of these policies,” the two Republicans wrote to their Democratic colleagues.

Cassidy also said he opposed carbon taxes and cap and trade policies that increase energy prices. He pointed to the recent carbon tax riots in France as a reason to be wary of energy price hikes.

A “refreshed energy bill” is on Sen. Lisa Murkowski’s “to do list,” the Alaska Republican said at a Wednesday energy summit, The Washington Examiner reported, referring to legislation she put forward with Washington Sen. Maria Cantwell, a Democrat, in 2016 to update federal energy laws.

Murkowski also said she’s “bullish” on nuclear power, and said she planned on meeting with the Trump administration on how to deal with nuclear waste policy.