The Fox News anchor compared the border situation in 2000 when “1.6 million people were stopped crossing the border illegally” to last year, when “less than a quarter that many were caught.” He also contended that “80 to 90 percent of the cocaine, heroin and fentanyl seized at the border is seized at ports of entry, not along unfenced areas.”

“And in 2017 twice as many of the new people in the country illegally were from Visa overstays as were from crossing the border,” said Wallace. “Again, where’s the emergency, the national emergency to build a wall?”

Miller responded by pointing out that “illegal immigration doubled from 6 million to 12 million” during George W. Bush’s time in office. “That represented an astonishing betrayal of the American people. I’m not going to sit here and tell you that George Bush defended this country on the southern border, because he did not.” (RELATED: RNC Chair: Democrats ‘Want Porous Borders To Help Get Voters)

He then cited several key differences between then and now.

Back then, 95 percent could be turned around in a matter of days. As a result of loopholes, activist judicial rulings and increasing sophistication from cartels, the reality is, is that more than half the people crossing the border are what we call non-impactable, they can’t be turned around. What you see is sophisticated operations and smugglers will actually push out migrants and children and family units to divert border agents, and then because there’s not secured areas with the wall, they’ll then cross after the border agents have been diverted to those areas.

During a back-and-forth about drug deaths, Wallace agreed that more people have died of late, but stated that 80 to 90 percent “don’t come from unfenced areas but come from ports of entry.” 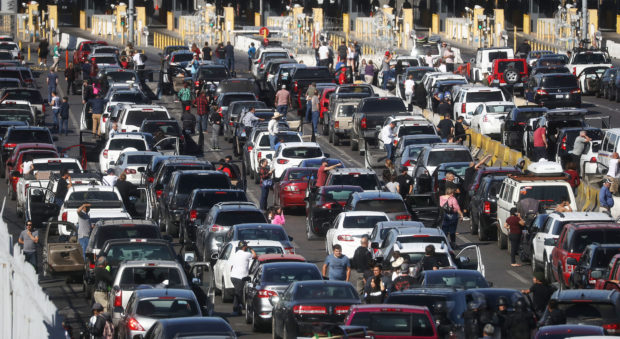 TIJUANA, MEXICO – NOVEMBER 25: People attempting to cross into the U.S. look on by their vehicles as the San Ysidro port of entry stands closed at the U.S.-Mexico border on November 25, 2018 in Tijuana, Mexico. (Photo by Mario Tama/Getty Images)

“The problem with the statement, that you’re apprehending 80 to 90 percent of drugs at ports of entry, is that’s like saying you apprehend most contraband at TSA checkpoints at airports,” said Miller. “You apprehend the contraband there because that’s where you have the people, that’s where you have the screeners. I assure you if we had people at that same density and screeners at that same density across every single inch and mile of the southern border, you’d have more drugs interdicted in those areas. You don’t know what you don’t know and you don’t catch what you don’t catch.”

“I guarantee you this, if Donald Trump had said he’s invoking the national emergency authority to build a security perimeter in Iraq, or Afghanistan, or around a military installation in Syria, there would not have been one word of objection from Congress,” said Miller.

“Can you point to a single incident, even one, where the president asked Congress for money, Congress refused to give him that money, and the president then invoked national emergency powers to get the money?” asked Wallace.

After going back and forth, Miller countered Wallace’s question with one of his own: “Chris, can you name one foreign threat in the world today outside this country’s borders that currently kills more Americans than the threats crossing our southern border?”

“You know, the joy of this is I get to ask you questions and you don’t get to ask me …” Wallace said.